Mitsubishi Power Americas Inc. is on a mission to build out a “hub-and-spoke” network of infrastructure to produce, transport and store low-carbon hydrogen in North America, CEO Paul Browning said recently. 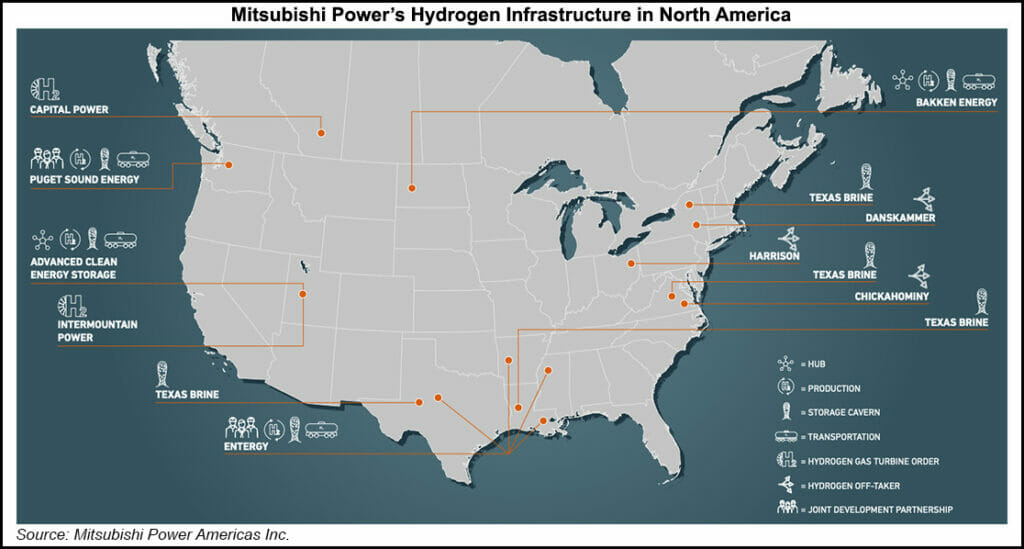 The company’s large-scale hydrogen partnerships include what it touted as the largest green energy storage project and the largest blue hydrogen project in North America in announcing a partnership with Citigroup Global Markets Inc.

Hydrogen is seen as a key element of the energy transition because of its versatility as an emissions-free fuel at the point of combustion, and as a vessel of energy that may be converted to electricity when fed through a fuel cell.

The challenge lies in scaling up production of low-carbon “green” and “blue” hydrogen. Green hydrogen is produced by splitting hydrogen molecules from water via electrolysis powered by renewable or nuclear energy. Blue hydrogen production entails splitting hydrogen from natural gas and then capturing and storing the carbon dioxide emissions.

The blue hydrogen project, meanwhile, is a joint venture with Bakken Energy in North Dakota. It comprises facilities that will produce, store, transport and consume blue hydrogen.

Mitsubishi Power also is manufacturing hydrogen gas turbines for Intermountain Power Agency in Utah and for Capital Power in Alberta.

Browning added, “For several years, we’ve been working with early adopters of green and blue hydrogen that have advantaged access to existing hydrogen infrastructure, such as the Intermountain Power Agency, Magnum Development, Bakken Energy, and Entergy’s Orange County Advanced Clean Power Station. Now we plan to build off of these early adopter projects to build a hydrogen hub-and-spoke infrastructure that spans North America and Makes clean, affordable hydrogen widely available.”

A recent study by the Massachusetts Institute of Technology Energy Initiative found that a hydrogen-fired gas turbines (HGFT) can compete in terms of levelized cost of electricity with lithium-ion batteries in offsetting the seasonal variability of wind and solar plants.

“However, we find the power prices required to justify investment in an HFGT to replace a natural gas-fired turbine are considerably higher than those seen in the market today,” researchers said.

On Tuesday, meanwhile, researchers at Pusan National University in South Korea said they developed a method for producing green hydrogen in a more efficient, less energy-intensive manner that could allow production to scale up more rapidly.