Natural gas spot prices during the Oct. 4-8 trading period notched another week in the black as power burns recovered from the prior week’s slump. In spite of the mild weather pattern blanketing much of the United States, NGI’s Weekly Spot Gas National Avg. jumped 43.0 cents to $5.580. 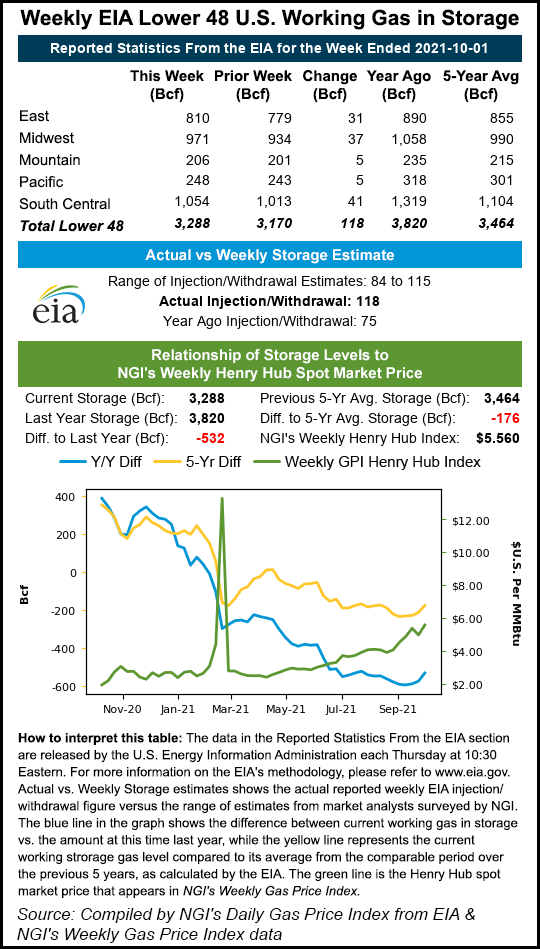 Nymex natural gas futures, meanwhile, continued to be heavily influenced by supply fears in Asia and Europe. Prices rallied for the better part of the week, but then talks of more gas potentially heading to Europe this winter sent prices overseas and here in the United States lower in the latter part of the week. The November Nymex contract settled Friday at $5.565, off 11.2 cents from Thursday’s close.

Though cold weather remains mostly elusive in early October, cash prices strengthened considerably throughout the country. Even at these high price levels, gas-to-coal switching gas largely has been exhausted. Demand also has yet to meaningfully respond.

Stouter increases were seen on the East Coast, where some pipeline and field maintenance events curbed production in the region. Tennessee Zone 4 Marcellus cash averaged $4.545 for the week, up $1.125.

On the futures front, the Nymex strip continued the dizzying price swings of the past few weeks as global supply concerns maintained their grip on U.S. markets during the first full week of October. Nymex futures fluctuated in wide ranges throughout the week, with the prompt month touching a $6.466 intraweek high before plummeting to an intraweek low of $5.393. As the smoke cleared, the November contract landed at a $5.565 settlement to end the week, 20.1 cents below Monday’s close.

If considering only U.S. fundamentals, the gas market is firmly in bear territory. Weather is mild, demand is low and the market has become increasingly comfortable with the storage trajectory in the final weeks of the injection season.

On Thursday, the Energy Information Administration (EIA) reported a monstrous 118 Bcf build in inventories that lifted total working gas in storage to 3,288 Bcf. Though still far below year-ago levels, the triple-digit build trimmed the deficit to the five-year average by one percentage point to 176 Bcf.

Broken down by region, the South Central region posted a plump 41 Bcf increase in storage inventories, including 21 Bcf in nonsalt facilities and 20 Bcf in salts, according to EIA. The Midwest added 37 Bcf to stocks, and the East added 31 Bcf. Inventories in the Mountain and Pacific regions each climbed by 5 Bcf.

Though the EIA figure surprised analysts to the upside, EBW Analytics Group pointed out that some of the factors that contributed to the plump build are set to ease in the next week or so. For example, feed gas demand from liquefied natural gas (LNG) export facilities should rise as Cove Point LNG returns from maintenance.

Meanwhile, Friday nominations for the Corpus Christi and Freeport LNG facilities imply a return to near-full utilization, and Sabine Pass Train 6 could ramp up at any point. By the end of this week, EBW said LNG demand could be 3.0 Bcf/d above the Oct. 6 low.

Tudor, Pickering, Holt & Co. (TPH) analysts also noted that power burns were lower during the EIA’s latest reference period, but strengthened back above the five-year average this week. TPH estimated power burns Thursday of 33 Bcf/d, versus a five-year average of 31.5 Bcf/d. Week-to-date electric generation demand is up an estimated 2 Bcf/d week/week.

The firm is modeling a 90 Bcf injection for the next EIA report.

Nevertheless, analysts have grown far more comfortable with where stocks are expected to finish October than they were only a month ago. While early projections pointed to end-of-October inventory levels below 3.4 Tcf, some forecasts now show stocks hitting around 3.7 Tcf.

NatGasWeather said the longer it takes for widespread freezing temperatures to arrive in the United States, the better shape supplies would be in ahead of the start of the withdrawal season. Also of importance is how soon cold weather may arrive in Asia and Europe.

Gas supplies on the two continents are limited after a cold winter last year was quickly followed by a sweltering summer, limiting the availability of gas to inject into storage. Asian and European gas prices subsequently have been on a tear, reaching record highs into the fall.

That said, the Canadian Ensemble proposes warmer temperatures than the forecast in places like Germany and France, according to the Weather Desk. “A negative phase of the Scandinavia pattern may play a role on the pattern here, and this offers the risk for cooler temperatures in the North.”

NatGasWeather said if forecasts turn chillier for late October or early November over the next seven to 10 days, “a renewed push higher for the front month is likely.”

Spot gas prices across the country continued to slide on Friday for weekend through Monday delivery amid a mostly moderate weather outlook. Interestingly, some of the biggest drops occurred in the Rockies, where forecasters are calling for the first snow to arrive in the coming days.

AccuWeather said snow could fall by Sunday in the Cascades of Washington and Oregon. By Monday and Tuesday, a dip in the jet stream will become very pronounced across the Southwest. Much colder air combined with a stalling storm may lead to significant snowfall in parts of the West.

“A storm will blossom and produce windy conditions with snow across most of the northern Rockies,” according to AccuWeather meteorologist Rob Richards. Outside of the highest mountain peaks, temperatures are forecast to be too high for precipitation to fall as anything other than rain. However, a second cold front with much colder air behind it is to arrive on its heels.

“This will cause temperatures to fall further and set the stage for a more impressive ripple in the jet stream to usher colder conditions into the Rockies,” Richards said.

Cash traders were unfazed Friday by the chilly forecast, sending spot natural gas prices much lower ahead of the weekend. Kingsgate plunged $1.800 to average $4.200 for gas delivery though Monday. Northwest Wyoming Pool was down 79.0 cents to $5.120.

Price declines throughout the country’s midsection were limited to less than 30 cents at the majority of locations. Chicago Citygate cash prices fell 24.0 cents to $5.175 for gas delivery through Monday. Farther east, Transco Zone 5 slipped only 6.5 cents to $5.600.

In the Northeast, Algonquin Citygate tumbled 52.5 cents to $4.660 for the three-day period.