for Friday delivery traded sharply lower with trades as much as $1.50 lower at Midwest points. Only a few points made gains, and declines were common in the Northeast, Mid-Atlantic, Gulf, Midcontinent and Rockies. 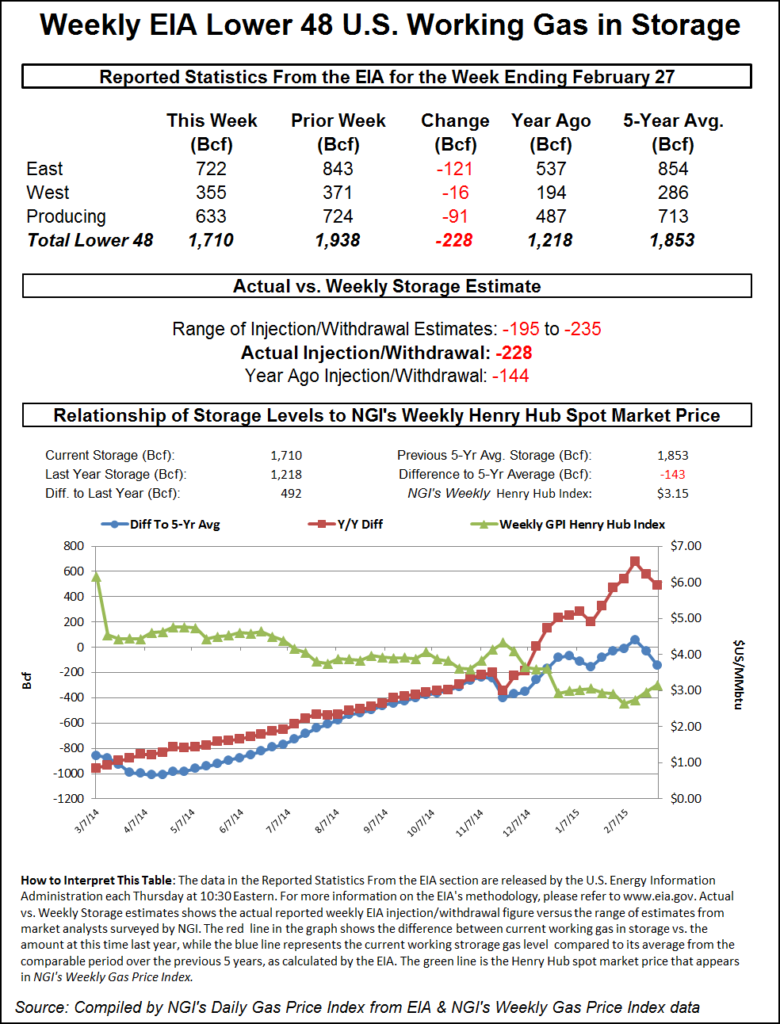 Next-day gas prices in the Midwest and Great Lakes took some of the biggest hits as a warming trend was forecast that would carry into next week. AccuWeather.com predicted the high in Milwaukee of 15 degrees Thursday would rise to 29 by Friday and reach 41 on Saturday. The normal high in Milwaukee is 39. Chicago’s forecast high Thursday of 17 was expected to reach 29 Friday and climb to 41 Saturday, just one degree shy of the seasonal norm. Detroit, MI’s Thursday peak of 18 was anticipated to make it to 23 Friday and 39 by Saturday, right at the seasonal high.

“After a frigid workweek in Chicago, the weekend will usher spring-like temperatures across the region,” said AccuWeather.com’s Jillian MacMath. “Midweek temperatures failed to climb above freezing in the city, with highs running far below normal for this time of the year, [but] by Saturday, the mercury will rise to more seasonable levels and hover near normal for a several-day stretch.

“Sunshine will prevail, despite clouds at times, with snow and wintry weather staying far from the city. Highs through Monday will climb just above 40 degrees. Saturday and Sunday will both provide excellent opportunities to get outdoors. By late week, the mercury will hit 50 degrees.”

Marcellus locations weakened as well. Gas on Tennessee Zone 4 Marcellus came in at $1.24, 6 cents lower, and deliveries to Transco Leidy Line fell 6 cents to $1.32. Gas on Dominion South was quoted 32 cents lower at $2.73.

The warming trend was expected to prevail well beyond the Midwest and Great Lakes. “A change in the weather pattern will turn off arctic air invasions to allow the March sun to go to work over much of the central and northeastern United States next week,” said AccuWeather.com meteorologist Alex Sosnowski.

“While the official arrival of spring is a couple of weeks away, the winter weather will break soon. The weather pattern next week has the potential to bring the warmest weather since early January to many areas.”

AccuWeather.com meteorologist Mark Paquette said, “We expect mild Pacific air to flow from west to east across the nation next week. The west-to-east flow will keep arctic air locked up over central Canada. Compared to what people have been through this February, the weather next week should feel much more comfortable from the Plains to the East.

“While the extensive snow cover and ice on area streams and rivers will remain a concern for flooding and ice jams moving forward through March, a significant amount of snow cover will be lost. Ice will begin to break up and move on the streams. Any storm coming along with drenching rain will have to be watched closely.”

The 10:30 a.m. EST release of storage figures by the EIA caught a few off guard as the actual figure of 228 Bcf was about 6 Bcf higher than expected. A Reuters survey of 23 traders and analysts showed an average 222 Bcf with a range of 195 Bcf to 235 Bcf. Analysts at IAF Advisors hit the nail on the head with an estimated 228 Bcf pull, and Bentek Energy’s flow model predicted a 224 Bcf withdrawal.

Before the release of the data analysts also had to factor in what the impact of well freeze-offs might have.

“Traders were looking for anywhere from 222 Bcf to 227 Bcf, and the market floated higher after the data was released,” said a New York floor trader. “It doesn’t feel like any bullishness. It gave a little incentive for short term buying, but I don’t think there is any incentive do anything until you get to the $3 to $3.01 area. Shorts are comfortable here.”

Tim Evans of Citi Futures Perspective said, “The net withdrawal was more than last week’s 219 Bcf decline and far above the 115-Bcf five-year average for the date. Although price reaction has been muted so far, we consider this a constructive report.”

Inventories now stand at 1,710 Bcf and are 492 Bcf greater than last year and 143 Bcf below the five-year average. In the East Region 121 Bcf was withdrawn and the West Region saw inventories decrease by 16 Bcf. Stocks in the Producing Region declined by 91 Bcf.

Observers keeping track of daily demand suggest that Thursday may be the last day of super-high demand, and by extension hyper-elevated prices in portions of the physical market. “Demand in the Midwest peaks today at 15.7 Bcf/d,” said industry consultant Genscape in a Thursday morning report. “Forecast highs in Chicago and Detroit are expected to remain 10-15 degrees F below normal through tomorrow, but warmer than today and warming through the weekend into next week.

“Genscape’s demand forecast for the region shows daily declines through the weekend, and just a moderate bounce back up on Monday to just above 13 Bcf/d. As the cold front works its way eastward, Genscape’s New England demand forecast peaks [Friday] at 3.99 Bcf/d. Appalachia and SEMA [Southeast Mid-Atlantic] demand also peak tomorrow at 21.74 Bcf/d and 19.58 Bcf/d, respectively.”

Market technicians are circumspect about whether recent price action is indicative of a market putting in a bottom. “Is a bottom forming?” queried Brian LaRose of United ICAP in closing comments Wednesday to clients. “If so the bulls need to provide evidence of such. To do that bulls need to start by shifting the technicals in their favor and clearing resistance. First up, the wide spread cluster of hurdles stretching from $3.034 to $3.494. Until and unless these levels can be exceeded the case for bottoming action is pure speculation.”