Energy activity across the Midcontinent and into the Rocky Mountains regions accelerated during the third quarter, with firms anticipating continued strong activity, according to a survey by the Federal Reserve Bank of Kansas City. 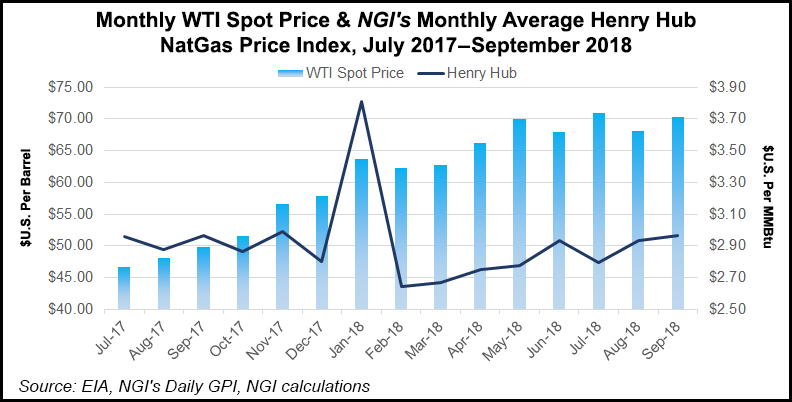 The quarterly survey by the Tenth District, conducted Sept. 14-25, was conducted for oil and gas firms operating in Colorado, Kansas, Nebraska, Oklahoma, Wyoming and portions of western Missouri and northern New Mexico.

“Firms reported that oil prices needed to be on average $55/bbl for drilling to be profitable, up slightly from the past few years but well below current and expected prices,” said Oklahoma City branch executive Chad Wilkerson.

The drilling and business activity index jumped from 26 to 45, the highest level since early 2017. Other indexes were mixed for the quarter, but all of them remained positive, indicating expansion.

From a year ago, indexes were mixed. The year/year drilling and business activity index climbed to 57 from 41, the highest posting in over a year. Access to credit index also increased moderately to 25. Total revenue and capital expenditure indexes grew modestly, while the total profits, employee hours, and wages/benefits indexes edged lower but remained at high levels. The supplier delivery time and employment indexes declined slightly from a year ago.

“Conversely, the future capital expenditures and wages and benefits indexes dipped slightly from high levels,” according to the survey. “The expected drilling and business activity index also remained high but declined from 61 to 50.”

Firms were asked what prices would be needed to be profitable on average in the fields in which they operate.

“Oil price expectations are driven by several factors,” said one surveyed executive. “There is very little spare capacity worldwide. U.S. production is strong, but production increases will begin to flatten. Geopolitical risks are expected to continue and possibly increase.”

Another executive said, “There is a tremendous supply of natural gas in the U.S., both discovered and undiscovered. New pipelines coming out of the Permian and Anadarko basins will help increase the received price.”

Operators also were asked how the expect to use all sources of excess capital over the next year. More than 60% plan to expand, while nearly 40% said they would reduce debt with excess cash. About one-quarter of those surveyed prioritized paying out dividends, and more than 21% reported excess financial capital would be put toward wages and benefits for employees.

“We want to make capital improvements to upgrade our rigs, however the 2015 downturn is always in the back of mind,” said one executive who was surveyed. “Hoarding working capital rather than major expenditures is the focus over the next six months.”

Asked about the impact of price differentials between West Texas Intermediate oil prices at Midland and Cushing in the Permian Basin over the next six months, nearly 38% had no opinion and almost 14% expected no impact. However, more than 44% expected a “slightly negative impact on oil production,” with less than 4% reporting a significant negative impact.