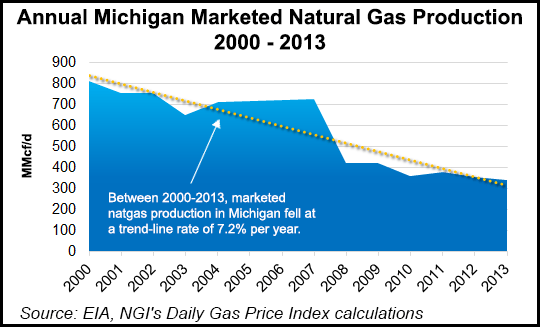 The rules require advance notification of towns and households if drilling is to be done in a residential area, defined as any area where there are 40 homes within a 1,320-foot zone. The advance notice also only applies to counties with more than a 750,000 population, which limits it to three counties in the southeast part of the state. Michigan’s current setback requirements of 300 feet and 450 feet in townships of 70,000 population or more would be unchanged.

Unlike the Antrim Shale play in the northern parts of the state, where oil/gas activity is decreasing, there has been renewed interest in drilling in the older Trenton-Black River oil formation in the southeast, according to DEQ Supervisor of Wells Hal Fitch. A setback of 1,000 feet, for which some have lobbied, would all but kill oil/gas development in the state, he said.

“Three-hundred feet is adequate distance for environmental and public health protection,” Fitch told NGI‘s Shale Daily on Thursday, although he acknowledged it is not a buffer against “aesthetic impacts” such as noise and lights from the 24/7 drilling activity.

The DEQ’s new rules are aimed at the quality of life concerns of residents in Wayne, Macomb and Oakland counties. Among those requirements are notification of local governments before projects start, groundwater monitoring, containment of drill cuttings and fluids in tanks, noise reduction, and banning drilling-related truck traffic during overnight hours.

Drilling in the three counties is all conventional and mostly vertical. There is no hydraulic fracturing involved, Fitch said. Michigan has about 11,000 gas wells, 4,000 oil wells, 1,200 injection wells and 2,500 underground storage wells, he said.

While Fitch is confident the DEQ rules will mitigate the problem, residents in townships near Detroit complained that round-the-clock drilling activity near their homes will not be curbed by the state agency’s action, according to a report in the Detroit Free Press.

Fitch acknowledged that some state lawmakers have indicated they may take action to address the problem, but he doesn’t think that is necessary.

Prospective natural gas resources in the state include the Antrim Shale and a portion of the Utica Shale, which extends into the state’s Collingwood formation, a shale/limestone chalk on the Lower Peninsula. The formation has attracted Encana Corp., Chesapeake Energy Corp. and Chevron Corp., among others (see Daily GPI, Nov. 10, 2010; May 20, 2010). Encana and Chesapeake have been under the microscope for allegedly colluding on prices in a Michigan Department of Natural Resources sale in 2010 (see Shale Daily, July 10, 2014; Daily GPI, May 5, 2014).