The Mexican government continues to update its environmental regulations as authorities prepare for the first exploration and production (E&P) auction to feature blocks with unconventional oil and natural gas resources since the energy reforms of 2013. 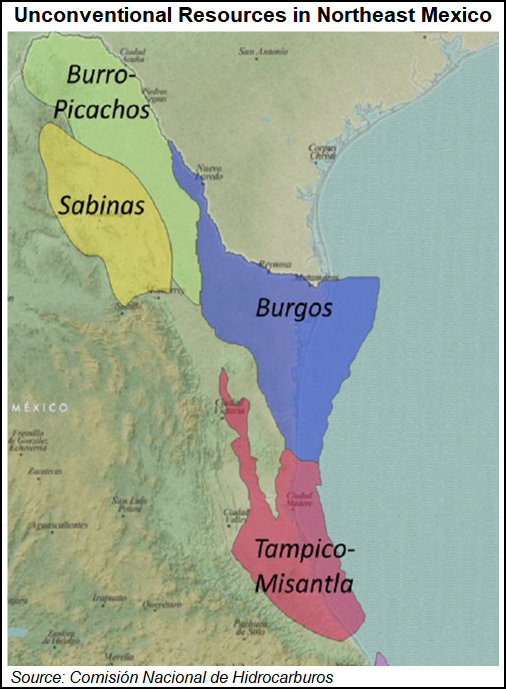 The National Water Commission, or Conagua, published in the official gazette last Wednesday (Aug. 30) rules detailing water conservation and protection measures that E&Ps must carry out during exploration and development phases of unconventional reservoirs.

The water use rules implement previously issued regulations from the Agency for Safety, Energy and the Environment (ASEA) and the National Hydrocarbons Commission, or CNH.

“Prior to the reforms we didn’t have as robust a regulatory framework as we do today,” CNH Commissioner HÃ©ctor Moreira told NGI. “Among other things, it’s important to note that the reforms gave origin to ASEA itself.”

“In this sense, the reforms have allowed the hydrocarbons sector to develop with the regulations it needs to safeguard the environment, both for conventional and unconventional projects,” he said.“In the case of the latter, our country remains in the very early stages of development, hence the need for the proper regulations for their exploitation.”

The new Conagua regulations apply to projects involving hydraulic fracturing (fracking), as well as other techniques, such as coalbed methane extraction and enhanced oil recovery (EOR).

The presence of anti-fracking groups in Mexico creates a somewhat precarious political scenario for unconventional development, which is seen as central to reversing the country’s declining natural gas production. Authorities are seeking a delicate balance between strong environmental safeguards and incentives for E&P companies.

“These new regulations resolve many concerns of the authorities and local communities, as well as environmental groups,” GMEC’s Gonzalo Monroy told NGI. He is managing director of the Mexico City-based energy consultancy. “But I think they also wind up being very costly for the companies.”

In particular, he noted, E&Ps are required to build a network of hydrogeological wells, which Conagua would use to monitor water quality. The regulations state that operators must build one monitoring well per 25 square kilometers (15.5 square miles) across the entire contractual area, and at least four wells near each hydrocarbons extraction site.

“This is going to be incredibly expensive for companies that want to do these projects,” Monroy said. “And these are the companies that have the market’s lowest operating margins, where you need to have higher prices and a competitive cost structure in order to develop a project.”

Moreover, the Conagua rules do not establish a clear mechanism for determining the cause of water contamination when it is detected, he said.

According to the rules, operators must also provide Conagua with, among other things, the exploration and development plans for their blocks, a work calendar, the number of wells to be drilled, and an estimate of the water needed for the project.

In addition, operators are to submit a detailed list of the chemical additives used in fracking fluids, including their commercial names; chemical formulas; Chemical Abstracts Service, or CAS, registry numbers; and volumes. The rules also include technical specifications for designing wells, based on international best practices for protecting water resources.

Along with CNH and ASEA, Conagua has contributed to a growing body of regulations for unconventional resources.

CNH issued technical guidelines for well designs, including specifications for unconventional wells, in October 2016 and then revised them in August. In March, ASEA enacted broader environmental regulations for unconventional projects in Mexico. These rules include provisions related to emissions, seismic risk mitigation, soil and water contamination and other environmental damages.

According to Moreira, with the publication of the Conagua water use guidelines, Mexico now has in place all of the necessary environmental regulations to develop unconventional projects. However, he said further adjustments or revisions may be needed in the future.

“Regulations generally do not remain static,” he said. “Rather, quite to the contrary, they are updated over time, in order to correct any flaws that may arise.”

Unconventional reservoirs of mostly non-associated gas account for around 68% of Mexico’s known resource potential, according to CNH. The country is heavily dependent on natural gas imports from the United States, leaving it exposed to external shocks.

This vulnerability was starkly underscored in late August, when the impact of Hurricane Harvey on the Texas energy industry temporarilycurtailed about 1 Bcf/d of pipeline exports to Mexico, putting the domestic gas pipeline system on critical alert.

To date, unconventional E&P remains limited in Mexico. The few projects in the country to use fracking have all been drilled by Petroleos Mexicanos (Pemex), the state oil company. Pemex now has 180 days to comply with the new Conagua rules at its existing unconventional wells, which include several EOR projects.

CNH is still finalizing plans for the fifth tender in the second E&P licensing round. Round 2.5 is expected to include a significant share of blocks with unconventional resources. In August,CNH said it expected to release the Round 2.5 plans soon and launch the tender in early 2018.

The most promising unconventional resources in Mexico are concentrated in the northeast region, in the Sabinas, Burro Picachos and Burgos basins, the latter of which currently produces most of the country’s supply of non-associated gas. The Tampico-Misantla basin on the central-eastern coast also contains associated and non-associated unconventional gas reservoirs.

Northeastern Mexico has historically suffered from water supply issues, according to Monroy, which could lead to conflicts between E&P companies and local communities over who gets priority in the distribution of water permits.

“That is a really complex issue to resolve,” Monroy said. “There is no easy answer.”

Other pending challenges for unconventional projects include land access, which involves an opaque ownership system and unresolved legal disputes that, in some cases, date back to the agrarian reforms of 1938, the same year that Mexico nationalized its oil industry.

Mexico will also have to tailor its fiscal regime to recognize the risks and costs of developing unconventional resources in a country that has limited experience with these kinds of projects, according to Monroy.

“If people are right away expecting royalty fees of 70%, no serious company would go for that,” he said.

“I think it’s going to be a process of trial and error,” he added. “The first round might not be that successful, and we’ll move forward as we start adjusting things.”