Mexico’s Petróleos Mexicanos (Pemex) had yet another disastrous financial result in the fourth quarter, but executives in a conference call said they were buoyed by upstream results and were planning to spend more this year to get more oil and gas out of the ground. 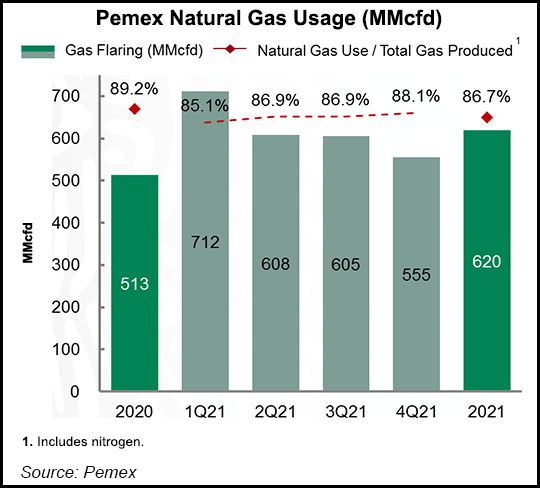 Capital expenditures (capex) for this year are pegged at “levels above” 200 billion pesos ($9.7 billion), CFO Alberto Velázquez said. He said this is a result of the “highest budget approved for exploration and production.” In 2021, capex was 161 billion pesos, with 2020 capex of 122 billion pesos.

Gas production growth was led by the Ixachi field in Veracruz, which grew 106 MMcf/d from a year earlier.

Natural gas capture showed a slight improvement and reached 88.1% in the fourth quarter. Executives blamed the figure on high levels of nitrogen in the Ku-Maloob-Zaap asset, along with processing infrastructure and other problems at the Ixachi and Quesqui fields.

Starting in the second half of 2021, “Pemex has worked to improve gas production,” executives said. They cited a series of infrastructure works including the installation of two scrubber separators in Papan for gas conditioning in the Ixachi field.

Oil and condensate output, meanwhile, rose 4.5% to 1.751 million b/d in the fourth quarter. The gains were attributed to increases in liquid hydrocarbons production from well completions at the company’s so-called priority fields. These fields are now producing 322,000 b/d, from essentially nil at the start of 2019.

Production from the fields was led by Ixachi, Quesqui and Mulach. Eighteen wells are expected to be completed in the first quarter.

The refining business is a central focus at Pemex during the administration of Andrés Manuel López Obrador as the country looks to become self-sufficient in fuels to end crude exports.

The 340,000 b/d Dos Bocas refinery in Tabasco state is now about 73% complete, executives said. The refinery processing capacity across the nation’s six working refineries improved by 20% last year. Still, the company only processed an average of 712,000 b/d of its total production from domestic refineries in 2021.

The purchase of the Deer Park refinery in Texas was also completed in the first quarter. It was financed entirely by the Mexican government at a cost of 23 billion pesos, or $1.1 billion.

The Mexican government said last year it was going to make structural changes “of a permanent manner” to help Pemex finances. One change is to keep reducing the profit-sharing duty, or DUC by its Spanish acronym, which accounts for 80% of the direct fiscal burden. The DUC rate fell from 65% in 2019 to 58% in 2020 and is currently at 52%. That figure will fall to 40% this year, executives said.

Despite higher crude production and a realized oil price that was almost double what it was during the comparable period in 2020, Pemex reported a loss of 124 billion pesos, or $6 billion, in the quarter. This was compared with a profit of 96 billion pesos a year earlier. The company blamed the result on its tax burden and exchange rate losses.