Mexico’s state oil giant Petróleos Mexicanos (Pemex) appears poised to increase its natural gas output as it begins development at the Lakach deepwater field and works to curb the longtime scourge of flaring. 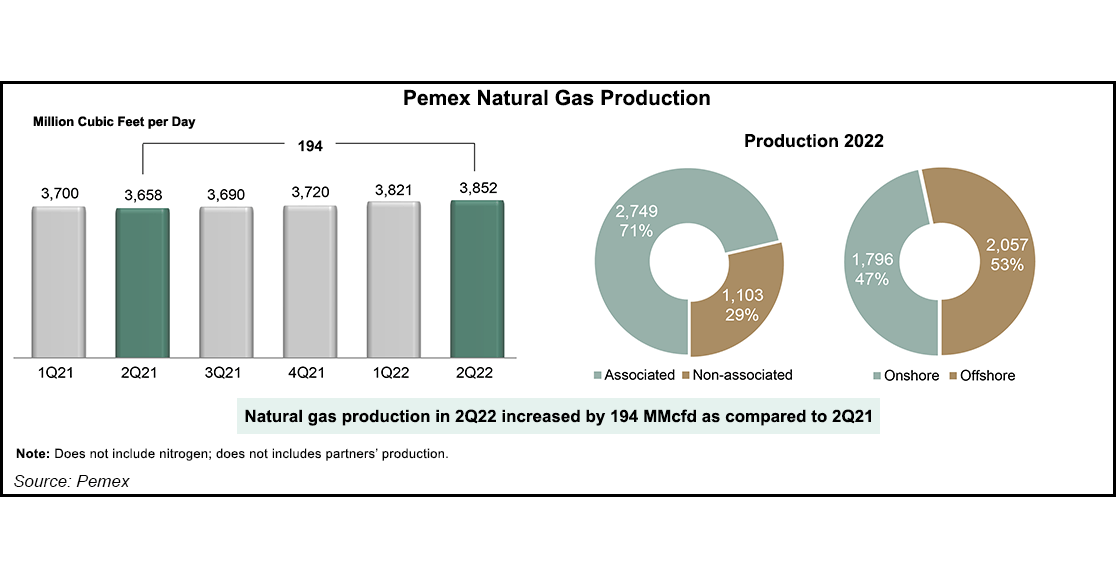 “We seek to progressively reduce the level of gas sent into the atmosphere,” executives said last week during a call to review second quarter earnings.

Pemex is investing 14.5 billion pesos, or $710 million, this year on improving gas capture, and a further 29 billion pesos in the next two years, executives said.

New infrastructure, maintenance programs on compression and booster equipment, and the closure of leaky wells have aided in the effort, executives said. The company has established a 98% gas use goal by 2023.

During a presidential meeting at the White House last month, Mexico and the United States issued a joint pledge “to tackle methane emissions from oil and gas and other sectors, accelerate the transition to zero-emission vehicles, and deepen our efforts to seek nature-based solutions, enabling our two countries to become global leaders in clean energies and actions to combat climate change.

“In support of the Global Methane Pledge and Global Methane Pledge Energy Pathway, Mexico and Pemex, in cooperation with the U.S., will develop an implementation plan to eliminate routine flaring and venting across onshore and offshore oil and gas operations and identify priority projects for investment.”

The Lakach deepwater natural gas field has been long talked about as a major natural gas resource. The field was first explored in 2008, but the company ran out of funds and it was scrapped a few years later.

Executives said an agreement with New Fortress Energy Inc. (NFE) would allow natural gas production to begin at Lakach as early as July of next year. Pemex has said Lakach contains proved and probable resources, i.e. 2P reserves, of close to 1 Tcf. The companies will spend $1.5 billion to develop the field.

NFE executives previously said they plan to jointly complete seven wells that Pemex has already drilled. Most of the gas is to be super-chilled and exported via a 1.4 million metric ton/year floating liquefied natural gas unit that NFE plans to deploy to the site, along with an offshore gas processing plant.

The liquefaction capacity translates to about 184 MMcf/d. Remaining gas output from the wells would be sent to Mexico’s internal market.

The roughly 20 fields given top priority in the current administration continue to add the majority of new oil and gas production, executives said.

Full-year 2022 capital expenditure is expected to be 215 billion pesos ($10.6 billion), the majority of which will go to the upstream.

Pemex had another good quarter financially. Executives said the company didn’t need government help for debt payments in 2Q2022 but “this is something that is dynamic and could vary this year.”

Realized oil prices were up 60% year/year and averaged $105.34/bbl in 2Q2022. Mexico subsidizes energy consumed by end users, and market participants including Pemex can recover the differential between the international price and the commercialized price, executives said.

Meanwhile, during the most recent quarter 39 Pemex suppliers took part in a debt swap. Pemex offered them the swap in lieu of paying their obligations in cash. Executives called it a “one time event” that they didn’t expect to repeat. Pemex has over $100 billion in outstanding debt.