The gap between natural gas production and demand in Mexico continued to widen in 2021, according to the 71st edition of BP plc’s Statistical Review of World Energy published Tuesday. 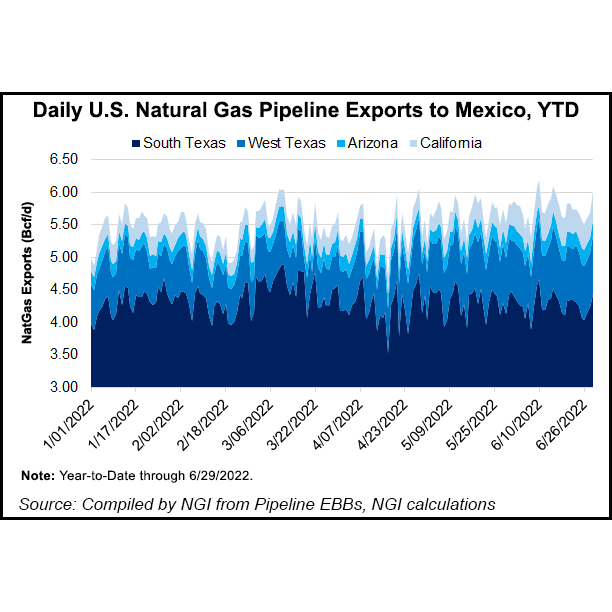 Pipeline imports from the United States have mostly displaced liquefied natural gas imports into Mexico, which totaled 0.9 Bcm in 2021, BP said. This was down from 2.5 Bcm in 2020 and 6.6 Bcm in 2019.

So far in 2022, Texas has been responsible for over 91% of gas exports to Mexico, according to new analysis from BTU Analytics. While South Texas remains the dominant source of those flows, West Texas is rapidly gaining ground due to new pipeline infrastructure coming online in Mexico, analysts said.

BP, by far the largest natural gas marketer by volume in North America, has capitalized on Mexico’s growing reliance on U.S. gas. BP established a gas marketing presence in the country after a constitutional energy reform opened the sector to private competition.

A recent directive from energy ministry Sener appears poised to solidify Pemex and CFE’s primacy by requiring users on the Sistrangas national pipeline grid to purchase gas from one of the two state-owned players.

Mexico’s carbon dioxide (CO2) emissions from energy rose to 373.8 million metric tons (mmt) in 2021 from 357.7 mmt in pandemic-ravaged 2020, a growth trend in line with North America and the world.

Canada and the United States continued to dwarf Mexico in terms of annual primary energy consumption per capita. This metric was 364.4 GJ for Canada, versus 279.9 GJ for the United States and 52.1 GJ in Mexico, according to BP.

Globally, with people back to work and on the road following the relentless Covid restrictions in 2020, energy consumption made a historic comeback last year – particularly natural gas and renewables – according to BP.

Chief economist Spencer Dale, whose team compiles the industry’s energy bible, warned, though, that the “challenges and uncertainties facing the global energy system are at their greatest for almost 50 years, at the time of the last great energy shocks of the 1970s.”