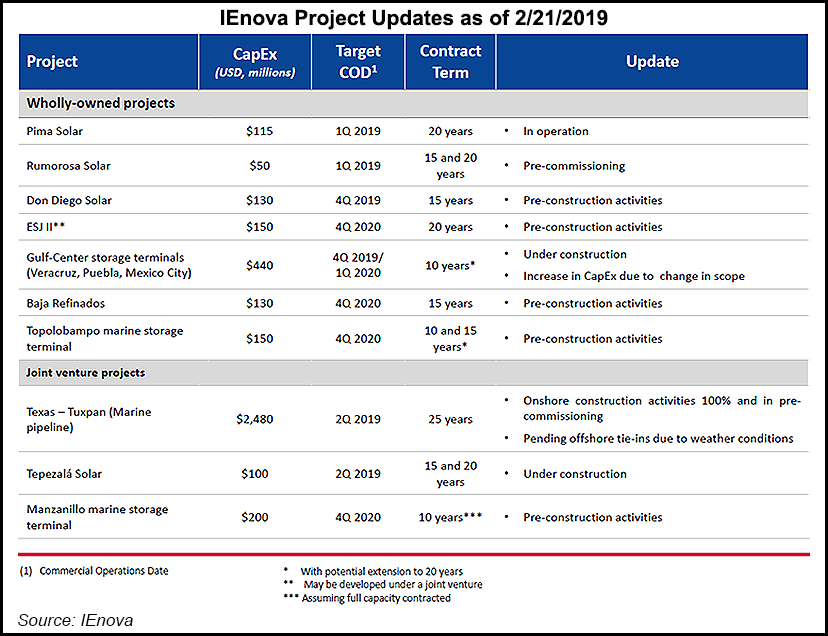 CFE is Mexico’s state-owned power utility and the anchor customer of the Sonora pipeline, which includes the 503-kilometer (313-mile) SÃ¡sabe-Guaymas and 328-kilometer (204-mile) Guaymas-El Oro segments. The Guaymas-El Oro segment remains shut amid a still-unresolved legal dispute with one of the area’s eight Yaqui indigenous communities. The other seven gave their blessing to the pipeline, which entered operation in 2017, but was subsequently sabotaged that same year by the dissenting Yaqui faction.

IEnova is the Mexican unit of U.S.-based Sempra Energy.

During IEnova’s fourth quarter earnings call Thursday, Ruiz Sacristan told analysts that he and Bartlett had a “very cordial discussion about [Guaymas-El Oro]. We agreed with CFE that our priority is to work together to place this pipeline back into service.”

Since then, however, Bartlett has held meetings with executives of each company to discuss a path forward for their stalled projects.

“I think this is really a great opportunity to solve [the Guaymas-El Oro] problem and put that pipeline into place,” Ruiz Sacristan continued, adding, “There was no discussion whatsoever of what future contracts would look like.”

The expected in-service date of another delayed project, the Sur de Texas-Tuxpan marine pipeline, has been pushed to April 2019, IEnova CFO Nelly Molina said. In its previous earnings call, IEnova had forecast a startup date of late 4Q2018 or early 1Q2019.

Estimated capital expenditure (capex) for the project, which is a joint-venture with TransCanada, has risen to $2.48 billion from $2.36 billion, Molina said, citing that the cost overruns and delay are mainly due to unfavorable weather conditions that have impeded the final tie-ins of the pipe’s offshore section.

The company is targeting potential first Liquified Natural Gas (LNG) deliveries in 2023 for the project’s first phase, which is expected to produce approximately 2.4 million tons per annum (mtpa) of LNG.

IEnova reported a profit of $89 million (6 cents/share) for the fourth quarter, up from $37 million (2 cents) in the year-ago period.

The company attributed the increase to improved results at the TermoelÃ©ctrica de Mexicali (TDM) thermal power plant, the acquisition of Ductos y EnergÃ©ticos del Norte (DEN), and higher margins in the gas segment.