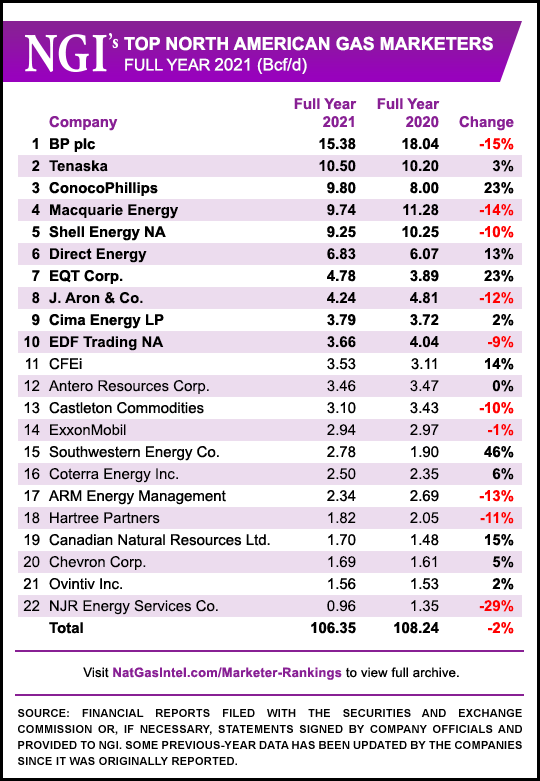 CFEi, a fuel procurement and marketing arm of state-owned power utility Comisión Federal de Electricidad (CFE), transacted 3.53 Bcf/d of gas last year, up from 3.11 Bcf/d in 2020. That made it the 11th largest marketer by volume, according to the survey.

CFE has sought to continue expanding its natural gas import capacity from the United States in order to supply its gas-fired power plants and grow its domestic gas marketing business through subsidiary CFEnergía.

U.S.-to-Mexico exports of natural gas by pipeline averaged 5.9 Bcf/d in 2021, up from 5.45 Bcf/d in 2020, according to the U.S. Energy Information Administration. Pipeline flows to Mexico (excluding non-public intrastate flows) stood at 5.39 Bcf/d as of Wednesday, according to NGI data.

The marketers included in the latest survey reported combined sales transactions of 106.35 Bcf/d for all of 2021 and 109.77 Bc/d for the fourth quarter. The full-year result was down slightly – 2% — from 2020, while the 4Q2021 number was virtually even with a year earlier.

That noted, several companies reported robust increases in the fourth quarter and throughout the year, offsetting notable declines among a handful of prominent players. Traders said the industry finished the year benefiting from strong natural gas demand momentum that is continuing into 2022.

ConocoPhillips’ buyout of Concho Resources Inc. in 2021 added to the sales volumes. However, like EQT, it also reported that new gas marketing and energy management agreements with producers, end users and power generators helped drive gains.

U.S. Global Investors’ Mike Matousek, head trader, said demand was not an issue in 2021, nor is it early in 2022. Rather, lingering concerns about the pandemic, combined with investor pressure on energy giants to invest more in renewable fuels, kept overall gas production in check. This, by extension, curbed sales totals.

Matousek told NGI that demand is solid amid increasingly harsh weather in both the peak winter and summer demand seasons in the United States, while supply shortages in Europe and Asia are driving steadily increasing demand for American exports of liquefied natural gas (LNG).

Still, the nagging effects of the pandemic – notable supply chain disruptions and soaring inflation — make it expensive and difficult to ramp up production. Oil production, too, is under pressure. This hinders output of associated natural gas, a byproduct of oil production.

“This virus is still a serious wildcard,” Matousek said.

“I think we’ve learned how to live with it, but it’s definitely with us, definitely capable of causing problems,” Saal told NGI.

Saal noted that this month, in response to a resurgence of cases, the Chinese government placed more than 30 million people under new lockdown measures to slow the spread of an Omicron variant.

Cases of the new subvariant of Omicron are spreading anew in other parts of Asia and Western Europe in March as well. This has fostered fresh concerns that the pandemic could cause at least temporary disruptions to both the energy sector and global economy recoveries this year.

With European countries currently dependent on Russian gas but vowing to wean themselves in protest of the war, demand for U.S LNG is soaring and supporting prices. American exports of the super-chilled fuel have consistently held near or above 13 Bcf – around record levels – since the war started nearly four weeks ago.

However, that may not be enough to offset European gas needs, and U.S. LNG exporters have little ability to ramp up further in the near term. Several expansion efforts are in the works, but it will be a matter of years rather than months for such projects to come online and drive significantly greater capacity.

Marex North America LLC’s Steve Blair, a senior account executive, told NGI that export volumes could top 15 Bcf to meet global demand, given Europe’s challenges and ongoing calls from parts of Asia for U.S. supplies. Because the United States does not have the ability to ship 15 Bcf/d of LNG, he said, the demand at that level amplifies global supply concerns.

“U.S. natural gas is absolutely tied into the global market now,” Blair said. “And when there is a major challenge affecting an entire continent like Europe, it also becomes our challenge in a way, and so this war creates a ton of uncertainty. Yes, there’s strong demand, but can we meet it, and if this continues for months, what other issues does it cause?”

In the near term, Rystad Energy analyst Kaushal Ramesh noted, Europe still relies on Russia for about one-third of its gas. He said markets are worried Russian natural gas exports could be interrupted amid pipeline damage from bombings in Ukraine. Much of the gas that countries on the continent get from Russia flows through Ukraine.

What’s more, Europe is pushing to rebuild stockpiles of gas amid the war, looking to the United States and other Western sources to minimize its dependence on Russia. The European Commission this month approved multiple rounds of sanctions against Russia, including bans on new investment in the Russian energy sector.

While the penalties do not restrict oil and gas purchases from Russia, Ramesh said an increasing number of international energy companies are withdrawing from Russia. As such, Russian gas exports to Europe could taper in coming months “as more companies ramp up self-imposed sanctions.”

In total, the various moving parts of the global natural gas puzzle make it difficult for producers to gauge the ideal level of output, U.S. Global Investors’ Matousek said. This could keep a lid on total production in 2022 and, in turn, put a ceiling on marketer sales volumes – at least in the first half of the year.

“There’s just so many unknowns right now,” Matousek said. While government forecasts call for increased output in 2022, production much of this year so far has held below 2021 highs and well below pre-pandemic peaks. “I’m not sure there really is a good guess at this stage of how much more active producers get.”