The natural gas-heavy Burgos Basin in northern Mexico accounted for 15% of the country’s total gas production in 2016, and foreign investment in the play could put it on par with the Eagle Ford Shale in South Texas, according to the U.S. Energy Information Administration (EIA). 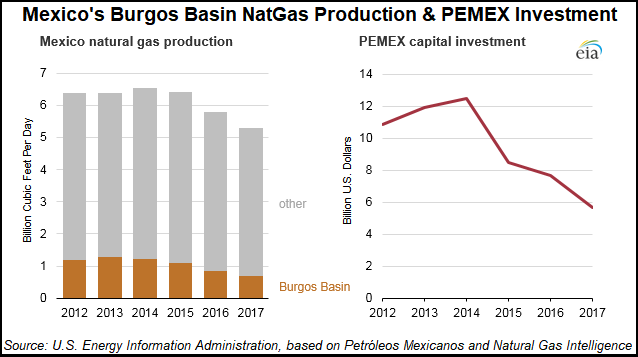 In a “Today in Energy” brief on Tuesday, the EIA said the Burgos holds the largest undeveloped shale resources in the country, and increased production could help meet increasing demand for natural gas in the northeastern part of Mexico, making the country less reliant on U.S. imports over the long-term.

According to the EIA, the Burgos currently has more than 3,500 active gas wells targeting conventional formations.

“Many reservoirs in the Burgos Basin have low permeability and high decline rates typical for tight formations,” the EIA said, adding that such formations require significant investment from Mexico’s national oil company, PetrÃ³leos Mexicanos (Pemex) “to maintain or increase production.”

However, in the wake of low natural gas prices and energy reforms submitted by President Enrique Pena Nieto and enacted by Mexico’s Congress in 2014, “that gave priority to oil development, Pemex has decreased its exploration and production spending in Burgos,” EIA said.

Mexico’s Secretaria de Energia (Sener) last month opened the onshore portion of the Burgos to gas development by private companies. “Sener hopes that private investment will help to reverse the decline in natural gas production and offset decreasing Pemex investment in the region,” the EIA said.

Last week, an official with Mexico’s National Hydrocarbons Commission (CNH) told attendees of the LDC Gas Forum’s U.S.-Mexico Natural Gas Forum in San Antonio that the agency is planning a Round 2.5 auction that would include unconventional resources. CNH assigned 25 onshore areas for the auction in July. The official said more details on Round 2.5 would be announced in the coming months, with opening bids planned in early 2018.

Sener and other Mexican government officials also told the conference they don’t believe energy reforms started by Nieto are imperiled by the country’s presidential election in 2018.

Mexico Energy Secretary Pedro Joaquin Coldwell said at a recent conference in Mexico City that the country also is considering holding a Round 3 auction before the end of 2018. The auction would include shale and tight resources. Coldwell characterized Mexico’s decline in domestic natural gas production and increasing reliance on foreign imports as a national security risk.