During the fourth quarter, pipeline exports to Mexico and Canada were up about 22% each from the year-ago quarter, according to the U.S. Department of Energy (DOE). Mexico, in particular, is increasingly a destination for U.S. gas as shale supplies grow and pipeline capacity increases. 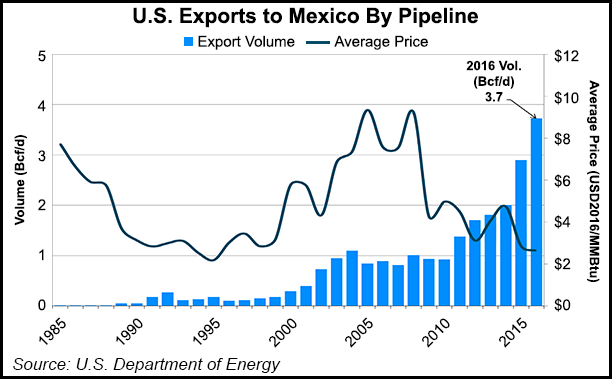 “U.S. exports to Mexico have grown substantially in the past 20 years, especially in the past year,” DOE said. “Growing demand for power generation and industrial uses in Mexico and an increase in pipeline capacity have been widely cited as the main drivers for this trend.”

The outlook for continued growth in gas exports to Mexico from the United States is good if economic data from Mexico is a reliable indicator. “Mexico’s economy grew solidly in the first quarter despite higher inflation, interest rates and uncertainty over trade relations with the U.S.,” the Federal Reserve Bank of Dallas said in a recent note.

Mexico’s economy expanded during the first quarter, the Fed said. Gross domestic product (GDP) expanded at a 2.4% annualized rate, and data on fourth quarter output was revised higher to 2.9%.

“The consensus 2017 GDP growth forecast was revised up from 1.5% to 1.7%,” the Fed said. “Recent data on exports, industrial production, retail sales and employment showed continued expansion but at a slower pace.” While inflation was up, the peso recovered some strength against the dollar in April for the third consecutive month, the Fed said.

In the fourth quarter Mexico eclipsed Canada as a destination for total natural gas exports by pipeline from the United States, with 54.8% going to Mexico and 33.2% to Canada,” DOE said in a report released Tuesday. The remaining 12% was LNG trucked to Canada or Mexico as well as LNG exported by vessel to Chile, China, Egypt, India, Italy, Japan, Jordan, Mexico, South Korea and Turkey.

“Overall, U.S. exports by pipeline increased by 22.3% while prices also increased by 29.8%, compared to the fourth quarter of 2015,” DOE said. Average prices for exports to Canada by pipeline were “slightly higher” than for Mexico.

Exports to Mexico rose in every month last year compared with 2015, DOE said. The increase steadily grew during the beginning of the year and continued through the end of the year.

Prices of pipeline exports to Mexico were lower in 2016 than the year before until September. The difference in prices was the widest during the beginning of the year, it but narrowed toward the middle of the year and summer months, DOE said.

In the fourth quarter of last year the majority of LNG exports by vessel went to Mexico (20.5 Bcf) and China (14.1 Bcf).

During the fourth quarter the United States also imported more gas from Mexico and Canada than during the year-ago quarter.

“U.S. net imports have steadily declined since 2008 until a slight uptick in 2016,” DOE said. “In 2008, the U.S. saw the reversal of increasing net imports. This is partly due to the increase in exports to Mexico as imports from Canada continue generally to trend downward.”