“The energy reform sought to create a sector that operated as a market with technical criteria and with long-term investor certainty, and that is being dismantled,” Guillermo Zúñiga, former Commissioner at the Energy Regulatory Commission (CRE) from 2013-2019, told NGI’s Mexico Gas Price Index. 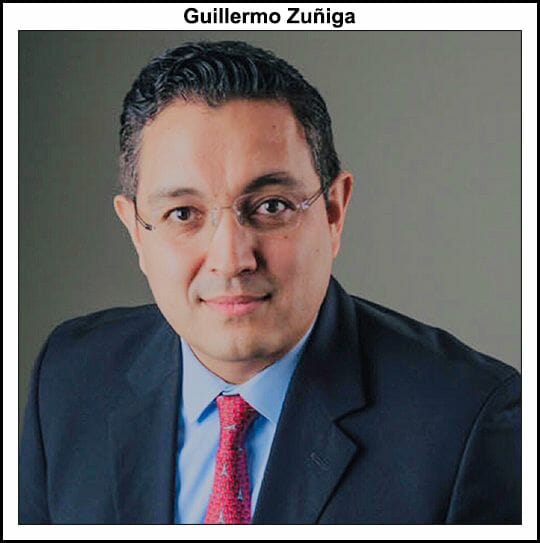 Zúñiga, currently an international attorney at the Earthjustice environmental nonprofit based in San Francisco, is the 48th expert to participate in NGI’s Mexico GPI’s ongoing question-and-answer (Q&A) series about the Mexican energy industry.

“A very important change in direction is occurring and we are seeing a return to a period of direct intervention in the sector, headed by the president, the ministries and the state-owned enterprises.”

In his more than 20-year career in the Mexican and international energy industry, Zúñiga has worked at Mexico’s Comisión Federal de Electricidad (CFE), the Federal Economic Competition Commission (Cofece), and Petróleos Mexicanos (Pemex). He also served as vice president of the Iberoamerican Association of Energy Regulatory Entities (ARIAE) from 2015-2018, and as a professor of energy law and policy at Instituto Tecnológico Autónomo de Mexico (ITAM) from 2010-2019.

NGI: The U.S. government sent a letter to Mexico this month about its concerns with the changes to Mexico’s energy regulatory bodies. What are your thoughts on the letter and what signal is the U.S. trying to send to Mexico about the energy sector?

Zúñiga: For starters, the timing of the letter at a time of transition for the U.S. government makes it very difficult to think that it wasn’t influenced by the team of Joe Biden and the incoming administration. The Biden administration and team are very worried about climate change and it appears the incoming team has an agenda that is very progressive. Biden’s team has put energy transition as one of its top priorities.

Additionally, the outgoing Trump administration didn’t have to send the letter, particularly in the final days of the government. The Trump government and current government of López Obrador were more aligned on energy matters.

So, I interpret the letter as something that wasn’t an initiative of the outgoing Trump administration and that it is more likely to have been something encouraged by the Biden team. The response by the Mexican government, for example, will have to be directed to the Biden government.

I also find it interesting to see that the letter is addressed to the Mexican Foreign Affairs Ministry. It was signed by the former secretariesof energy and trade of the U.S., but at a ministerial level, energy secretaries of both countries have a direct line of communication, as well as the trade ministers. There was no necessary reason to have sent the letter through diplomatic channels of the Secretary of State and the Foreign Affairs Ministry.

This is interesting because it seems that the U.S. and the outgoing Trump administration was looking to create and pressure a response by the Mexican government and two leading teams of [Mexican President Andrés Manuel] López Obrador’s cabinet – the Foreign Affairs Ministry and the Energy Ministry. And, because the letter refers to the USMCA, the U.S.-Mexico-Agreement, the free trade agreement between the countries whose recent ratification was led primarily, on the political side, by the Mexican Ministry of Foreign Affairs.

The letter is addressed to the Foreign Affairs Ministry, which is considered to have a moderate position on international economic matters, as well as to the Energy Ministry, the institutional leader of this particular sector of the economy. As we know, the Energy Ministry has been adamant in pursuing a nationalistic agenda that is centered on strengthening the state-owned energy companies and has promoted corresponding protectionist policies in the sector.

So, the response to this letter by the Mexican government will be very interesting and will really set a tone for Mexico’s stance regarding bilateral energy policy. Additionally, it will call upon a response by a Foreign Affairs Ministry that has to uphold the importance of the integrity of the USMCA international trade agreement, investment measures, and business interests of major companies, among many other things.

However, the response could also confirm that, in the eyes of Mexico, the role of international trade commitments doesn’t apply to the energy industry and that state monopolies are what the country hopes to continue to fortify. How Mexico responds will be very interesting.

NGI:  Any idea when Mexico might respond to the U.S. letter?

Zúñiga: I’ve yet to hear anything, but I imagine that they are going to have to attend to that letter quite soon. It’s not something you can just let sit out there without a response.

I think the answer is that we have to look at competition from a broad perspective and define the role of the regulatory state. The regulatory state policy model was designed to implement public policies since the 1990s, when the regulatory agencies began to grow and were given increasing autonomy from the central government. Several regulators for specific sectors were created and began to follow the advances of public policies in other parts of the world, such as in Europe and South America, which were liberalizing their markets in the years ahead of Mexico. This took time, and these markets didn’t just become immediately free and open, and they were under the power of a specialized regulatory agency. This happened in many countries and Mexico wasn’t the exception.

For constitutional and institutional reasons, Mexico wasn’t able to fully liberalize the energy industry during the international liberalization wave of the 90s and the early 2000s, though smaller sectors were opened to a degree to outside investment, and the CRE was created to regulate those activities, such as the natural gas and to a limited degree, electricity generation markets.

What the formation of the CRE and other regulatory bodies created was an opportunity to provide certain tranquility, stability and certainty for long-term investments, which is what many industries, including the energy sector, need to develop. A power generation plant, for example, is going to be in place for decades, and regulatory bodies created certainty for long-term investments, instead of just six-year government periods.

The regulatory agencies created an environment that gave more certainty to companies, investments and traders, and alleviated any political pressures that might have disrupted stability, given that the regulatory bodies were autonomous. It depoliticized economic sectors and fortified a competitive environment in Mexico.

So what’s happening now? A move that entirely contradicts the reasons for the creation of the regulatory agencies. Now the regulators, as well as the energy industry, are part of the political agenda of the executive branch. The idea of the regulatory bodies was to eliminate political control, and now we are seeing the exact opposite of that.

Now the centralized federal government wants to be the one to decide all that happens, to be the one that controls and directs the autonomous bodies, and therein lies the problem. The regulatory bodies are designed to prevent political intervention, and the current government is effectively trying to change that. The initiatives of the current administration are to weaken the regulatory bodies and again make them dependent or just another office within the federal ministries, which would give this administration direct control over them.

NGI: What you are explaining indicates a reversal of the energy reform. Do you think that is the objective of the current government? To undo the energy reform of the previous administration?

Zúñiga: Yes. That is really that the changes I explained indicate. The energy reform sought to create a sector that operated as a market with technical criteria and with long-term certainty, and that is being dismantled.

To respond to your question, yes, the energy reform is being undone. A very important change in direction is occurring and we are seeing a return to a period of direct intervention in the sector, headed by the president, the ministries and the state-owned enterprises.

NGI: We are also seeing renewable energy companies canceling projects and investment in Mexico. What are your thoughts about what is currently happening in the renewables sector?

Zúñiga: On a global scale, what we are seeing is a technological revolution in terms of renewable and clean energy options. And – returning to the topic of regulatory bodies – they are designed to make the introduction of these new technologies efficient so that they can quickly enter the market.

So, in Mexico, with the incumbent energy source being oil and oil-derived products, renewables represent competition that could interrupt the monopoly. They are seen as a threat in the sense that they can attract the clients of the incumbent, and maintaining the status quo requires disallowance of the entrance of new technologies. It’s similar to how, in the 1980s and 1990s, combined-cycle generation plants reduced electricity generation costs and threatened coal-fired power plants all over the world.

Now, that is the case with renewables. They are seen as a disruption, and they are a much cheaper and cleaner generation option. Battery energy storage is also a disruption, and eventually green hydrogen will be considered one as well.

The way to assure that competition is allowed, however, is through regulatory bodies. If there is a regulatory system in place that recognizes, authorizes and accepts these new technologies, such as clean energy technologies, they can be integrated quicker.

But if you have a current regulatory environment such as in Mexico, where permits to allow these new technologies are blocked, well, obviously an energy transition cannot currently happen due to political forces impeding it. Countries with regulatory bodies that favor the entrance of new technologies are allowing the energy transition to occur. Mexico, however, is not.

NGI: The Mexico energy industry is in a challenging spot. Do you currently see any growth opportunities in the sector?

Zúñiga: Mexico, as well as many other countries, is experiencing a clash between old energy models and the new ones. So, the opportunities exist if regulatory bodies are allowed to function as designed and are open to the entrance of new technologies that would create cheaper, cleaner sources of energy to citizens. The conditions for financing, development, new technologies and certainty have to be in place for that to happen, and for those opportunities to become available.

Having said that, one opportunity for growth in the electricity sector is for users to deploy decentralized solar generation, even to the extreme of having a mix of distributed generation and storage facilities to carry out off-grid energy schemes. Since distributed sources are becoming an important substitute of electricity transmission and distribution services, this is an example of how technology can directly compete with these so-called “natural monopoly” segments.