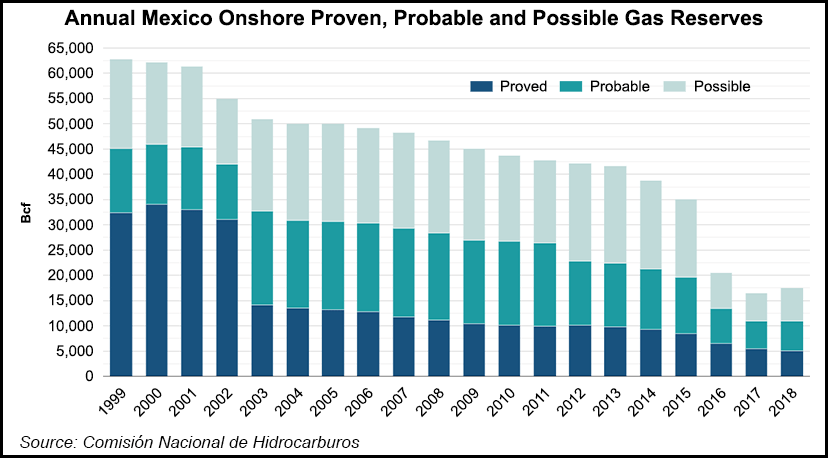 Despite suffering a 35% budget cut in 2019, ASEA will stick to the timeline laid out last year, which has its first major deadline for operators in February 2020, executive director Luis Vera said Wednesday during a webinar organized by the Institute of the Americas think tank.

Mexico is among the world’s 10 largest emitters of methane, Vera said, citing that the hydrocarbons sector is the country’s second leading contributor to emissions.

Methane is the main component of natural gas, and is about 84 times more potent as a greenhouse gas during the first two decades after its release than carbon dioxide, according to the Environmental Defense Fund (EDF).

Last November, ASEA published new methane emissions control and prevention regulations in Mexico’s official gazette. The rules were the result of a two-year collaborative process that included ASEA, environmental groups such as EDF and the Clean Air Institute (CAI), and the local oil and gas industry.

The regulations, which are the first of their kind in Latin America, apply to both new and existing projects across the entire oil and gas value chain.

EDF’s Matt Watson, vice president for energy, said in November that the rules put Mexico “on a clear pathway to meet a trilateral commitment between the U.S., Canada and Mexico to reduce emissions by 45% by 2025.”

However, that was before the December inauguration of president AndrÃ©s Manuel LÃ³pez Obrador, who slashed the budget of the SecretarÃ­a de Medio Ambiente y Recursos Naturales (SEMARNAT), or environment and natural resources ministry, by 17% to 31 billion pesos, or about $1.6 billion.

“It has been tough for everyone,” Vera said of the cuts, which were part of a larger austerity campaign for the public sector undertaken by LÃ³pez Obrador.

Part of the challenge faced by ASEA is that it only has personnel in Mexico City, Vera said. Mexico’s natural gas pipeline network alone stretches nearly 10,000 miles.

But in spite of the budgetary and logistical challenges faced by the agency, it remains committed to curbing methane emissions from the oil and gas industry, Vera said.

The new rules, which can be viewed here in Spanish, require firms to quantify methane emissions from throughout their operations during an initial baseline year, then establish an integrated program for the prevention and control of methane emissions, or PPCIEM.

The PPCIEM submission deadline is February 2020, which is also when companies must begin executing leak detection and repair programs. Under these programs, companies must conduct quarterly inspections and report the results to ASEA.

The deadlines for repairing leaks will depend on the intensity of emissions at the leak site.

Companies establish their own emissions reduction goals, which must be reached within six years of submitting the PPCIEM.

Amid a growing outcry to address the climate crisis, a slew of oil and gas companies, including majors such as BP plc, and Total SA, and independents such as Devon Energy Inc. and Dominion Energy Inc., have voluntarily committed to reduce methane emissions from their operations over the coming years.