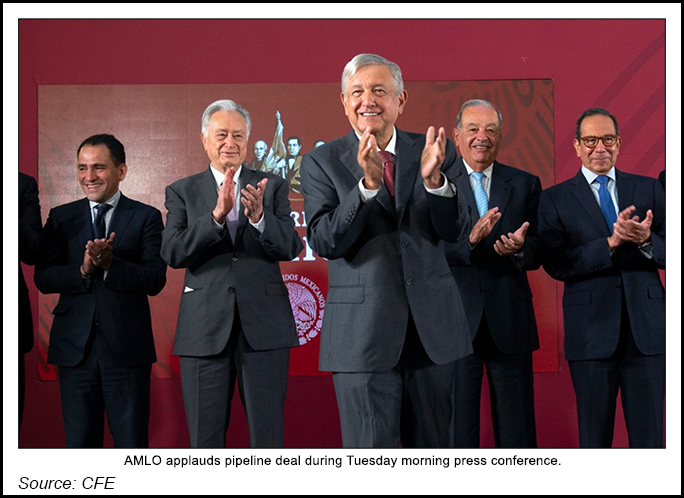 “We’ve finally reached an agreement,” Mexico President AndrÃ©s Manuel LÃ³pez Obrador said on Tuesday morning in his daily press conference. “I’d like to underline the fact that this was only possible because of the will and openness to dialogue on the part of businessmen, because legally they had signed contracts and they had come to agreement on conditions that we thought were harmful to the national treasury, and for this we reached out to the owners of the companies and we reached an agreement that was beneficial to everyone.”

In July, the CFE filed arbitration requests with the developers of seven stalled pipelines in an attempt to amend the force majeure clauses of the 25-year firm capacity agreements built into the original contracts, which it claimed were “abusive.” The CFE has said it reached agreements with three of the four pipeline companies, with only Mexican company Fermaca yet to commit to a new plan.

LÃ³pez Obrador said the new agreement would save Mexico $4.5 billion, without specifying details.

Among the pipelines in the agreement is the 2.6 Bcf/d Sur de Texas-Tuxpan pipe, a crucial outlet for Texas natural gas and fundamental to reliable gas service in the southeast of Mexico. The $2.5 billion marine pipeline owned by Infraestructura EnergÃ©tica Nova (IEnova) and TC Energy Corp. is ready to enter service but has remained stalled as the pipeline spat continued. It could begin operation by the end of this week.

IEnova said “through this agreement, a new tariff structure has been agreed to which will extend the life of the contract by 10 years.” The agreement “satisfies the interests of both parties and allows for a benefit to the CFE while conserving the integrity of the contracts.” The new terms include fixed natural gas transport fees, longer contract terms, new force majeure clauses and an end to the arbitration requests.

CFE said the agreement would allow marketing arms CFEnergÃ­a and CFE Internacional to market 8.2 Bcf/d, 63% destined to power plants and the remaining 37% to industry.

Beyond TC and IEnova, the third developer that reached agreement was Grupo Carso, whose CEO Carlos Slim was instrumental to brokering the truce. Slim, said to be Mexico’s richest man, was at Tuesday’s presidential press conference and said negotiations had been “cordial.”

“From our perspective, I’d like to say that we have the privilege of being able to pay fixed fees during the length of the contract, which will allow us to finance more projects, join more projects and invest more, which is very important for us,” Slim said.

“I’d underline the great importance of these pipelines as part of general national infrastructure that will allow us access to the cheapest gas in the world from Texas, where we already have connections.”

Most analysis points to the new contracts as favorable to both private companies and the CFE, with perhaps the end user suffering through higher natural gas prices.

“The companies won’t see their financial performance hit; they are happy and I think we should be happy too,” Mexico natural gas expert Eduardo Prud’homme told NGI’s Mexico GPI. “If they open the marine pipeline, it’s great news” and “certainly cheaper” than buying liquefied natural gas.

The contracts, which had not been made public late Tuesday, are essential to market transparency, Prud’homme said. The general mood about resolving the issues was positive, and “is a sign that the government is kicking off a new era in its relationship with the private sector,” he said.

Mexico’s IPGN monthly natural gas price index, which is highly correlated to U.S. natural gas prices, averaged $2.624/MMBtu in July, the lowest price recorded since the ComisiÃ³n Reguladora de EnergÃ­a (CRE) began publishing the index in July 2017. The July 2019 price was down from $4.090/MMBtu averaged in the same month a year ago.

A working group with representatives from the government, the CFE, and business chambers Consejo Mexicano de Negocios (CMN) and Consejo Coordinador Empresarial (CCE) plan to continue dialogue with Fermaca with the hope of “a positive result soon,” CFE CEO Manuel Bartlett said.

“This signals, without a doubt, the start of an important process of investment in the country, and what we were all hoping for,” CCE President Carlos Salazar said on Twitter on Tuesday.