Mexico’s energy authorities have taken a bold initiative by inviting tenders for the nation’s first auction of unconventional resources of massive but thus far unrealized potential and fraught with potential problems. 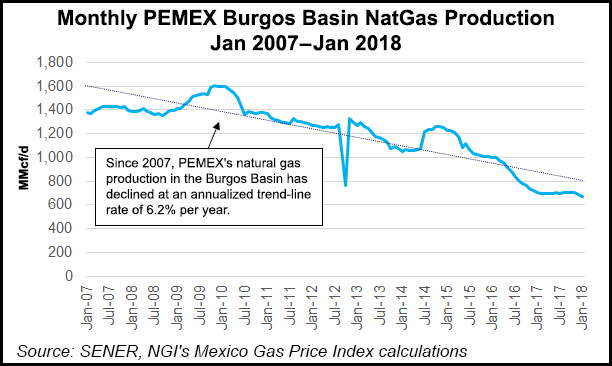 The invitation for Round 3.3, the third auction in the third round of the nation’s energy reform was published Friday in El Diario Oficial, the Mexican equivalent of the Federal Register. Access to the data room is to be opened on Monday (March 5). Presentation and the opening of bids is due Sept. 5.

The first attempt to hold an unconventionals auction was postponed while stringent rules were enacted about the use of water for hydraulic fracturing and consultations were completed for vulnerable communities in a state with high incidences both of poverty and violence.

The violence is a question for the Mexican security forces. As for community relations, during a meeting of the upstream regulator, the National Hydrocarbons Commission (CNH), a list of rules on community consultations was approved and deemed more than adequate.

Meanwhile, the potential prize is unlocking the Burgos which, Mexicans say, could have resources that are half as much again as the resources of the Eagle Ford Shale in South Texas, one of the cradles of the U.S. unconventional revolution.

Indeed, the blocks on offer in 3.3 form part of the Eagle Ford formation that extends on both sides of the border, said Luis Miguel Labardini, a partner of the Mexico City-based consultancy Marcos y Asociados.

Official sources indicate the Burgos and Eagle Ford geology is similar, but the region in question could not be considered as an extension of Eagle Ford.

However, at Thursday’s presentation, Undersecretary for Hydrocarbons Aldo Flores described the potential of the nine blocks as “gigantic,” or at least four and half times as large as the 37 on offer for the preceding onshore auction, 3.2, which is to feature conventional resources. Bids forthe 3.2 auction are due in late July.

In addition, analysts have long emphasized that the differences in the legal system of the United States and Mexico, particularly land tenure laws, mean that there are few points of comparison.

When, for example, a private U.S. farmer sells his land to an oil and gas company, the producer can move in quickly. However, in Mexico, what lies below the land belongs to the state.

At the presentation, the need to promote natural gas production in Mexico was emphasized by Energy Secretary Pedro Joaquin Coldwell.

More than half of Mexico’s hydrocarbon wealth is underground in the form of unconventional resources, he said. However, 84% of the natural gas consumed in the country is imported.

“We are depending on imports of gas in order to drive the nation’s industry, while our conventional deposits are becoming exhausted,” he said.

Meanwhile,the potential reserves of the Burgos Basin amount to 40 years of the current levels of Mexico’s imports of natural gas, Joaquin Coldwell added.

Though Tamaulipas is relatively undeveloped, it forms part of the northeastern region of Mexico, which is an industrial powerhouse that accounts for one-third of Mexico’s gas consumption.

The region also has six power plants; the Cadereyta refinery of Petroleos Mexicanos (Pemex); 18 horizontal exploratory wells that could be used for work on unconventionals; the ports of Matamoros and Tampico, and the Los Ramones pipeline.

CNH President Juan Carlos Zepeda said companies participating in the auction should have capitalization of at least $100 million or assets worth an estimated $500 million.

There are concerns about violence in the country, and the United States has issued travel warnings advising against visiting Tamaulipas. As well, former Tamaulipas Gov. Tomas Yarrington is in an Italian jail as the United States seeks his extradition. Yarrington concluded his mandate in 2005, and there have been no scandals involving the current governor.

However, violence continues. At a recent two-day forum on unconventionals in the border city of Reynosa, gun battles were reported both days in the daily El MaÃ±ana. The forum was protected by a discrete but heavily armed military presence.

Pemex production of non-associated gas in Burgos at one time stood at more than 1.5 Bcf/d, but it is now running at less than half as much.

“The violence there was one of the main factors of the decline,” said editor David Shields, who publishes the magazine Energia a Debate.

A cluster of petrochemical companies in and around the port of Altamira in Tamaulipas also has failed to expand in recent years where companies have complained of serious problems of crime, he added.

Arturo Carranza of Mexico’s National Industry of Public Administration, agreed that the perception of crime is prevalent in the business community.

“On top of that, operations that involve shale require high-quality basic infrastructure, such as roads,” Carranza said. “And the roads in Tamaulipas, as in much of rural Mexico, are adequate enough for their present purposes but not for the very heavy loads are are needed for shale operations.”