Federal judges in Mexico have now suspended the implementation of controversial new legislation in the power sector on both economic and environmental grounds. 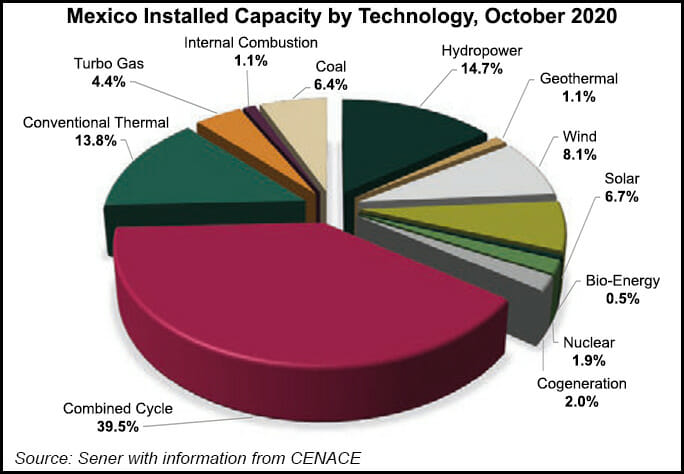 Greenpeace Mexico on Tuesday announced it had successfully lobbied for a judicial order suspending, on a provisional basis, implementation of the new rules that were passed by Mexico’s Senate on March 3.

The rules, if enacted, would modify Mexico’s electric industry law to give priority in the electricity dispatch order to generation assets owned by CFE, regardless of cost, followed by private sector generators.

The rules also would remove the obligation for CFE to purchase power via competitive auctions, allow the revocation of electricity self-supply permits, and authorize the modification and/or early termination of offtake agreements between CFE and independent power producers, according to a fact sheet on the reforms published by analysts at EY Mexico.

By agreeing to the provisional suspension, a judge recognized as valid Greenpeace’s argument that the reforms “delay interminably the decarbonization of electricity production and the fulfillment of international commitments in matters of climate change,” the environmental non-profit said.

Numerous suspensions against implementing the new rules have already been granted in other lawsuits, including a definitive suspension granted by Judge Juan Pablo Gómez Fierro on Friday.

Provisional suspensions typically are granted to plaintiffs within hours of filing a complaint, Daniel Salomón Sotomayor of Mexico City-based law firm Gonzalez Calvillo told NGI’s Mexico GPI. Definitive suspensions come next, and remain in effect until a verdict is reached.

The suspension awarded to Greenpeace is noteworthy in that it was granted in order to protect the environment as opposed to protecting competition in the market, Salomón explained.

A Greenpeace spokesperson also confirmed that this is the first suspension of the rules to be granted on environmental grounds.

Greenpeace Mexico’s María Colín, environmental law specialist, said the proposed reforms open the door to producing electricity from fossil fuels such as fuel oil that are “highly damaging for the population and the environment.”

The reforms in question have been widely criticized as a maneuver to ensure the purchase by CFE of high-sulfur fuel oil (HSFO) produced by state oil company Petróleos Mexicanos.

Mexico’s courts have proven among the few effective counterweights to the controversial energy policies of President Andrés Manuel López Obrador, as evidenced by the injunctions against the power law.

The policies have caused international energy companies to reevaluate plans to invest in Mexico, according to Marcela Roque, Energy Director at Luxem Energía in Mexico City.

“This ‘counter reform’ or ‘fuel oil law’ as some are calling it, presents several structural changes in the functionality of the market,” Roque told NGI’s Mexico GPI in a recent interview. Dispatching electricity from more expensive plants would mean that CFE’s distribution unit CFE Suministro Básico would either have to raise rates for end users, or the government would have to increase subsidies for CFE, she said.

“Additionally, market prices would be dictated principally by the costs declared by the CFE power plants, which can’t guarantee transparency,” Roque said. “Finally, the price signals that are currently provided by marginal prices would be lost, which means the loss of information about areas where power plants and transmission lines should be constructed.”