Mexico’s natural gas production in October rose to 3.93 Bcf/d, compared with 3.899 Bcf/d in the year-ago month. 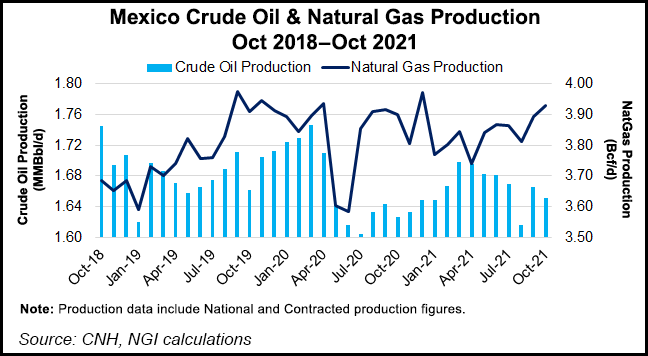 October’s production was the highest of any month this year. The average to date in 2021 has been 3.837 Bcf/d, according to upstream regulator Comisión Nacional de Hidrocarburos (CNH). September production was 3.894 Bcf/d.

Mexico makes up for its supply shortfall through imports from the United States. Pipeline imports have consistently been above 6 Bcf/d this year and hovered around 7 Bcf/d at times during the summer.

Although private sector oil and gas production remains relatively small, a new report by private sector operator association Amexhi found that independent companies in Mexico’s upstream have invested more than $18 billion in exploration and production since the country opened the market to outside investment in 2015.

A total of $42 billion in investment has been approved, and the 15 announced discoveries by the private sector amount to reserves of 2 billion bbl of oil, Amexhi said.

Beyond the freakish prices recorded during the Texas freeze in February, the October prices were for the fourth consecutive month the highest on record since the IPGN was launched in 2017. The CRE used 331 transactions from information provided by 31 marketers to calculate the October index.

Mexican natural gas prices track closely to pricing changes in the United States. In NGI’s latest survey of the market in August, Mexican natural gas deals tied to U.S indexes climbed for the third consecutive survey, reaching 76%. This was up from 72% in the March survey.

The U.S. Energy Information Administration (EIA) reported an average Henry Hub spot price of $5.51 for October from $5.16 in September and well above the $3.25 average seen through the first half of 2021.

The EIA is forecasting Henry Hub prices will average $5.53 during the winter months before declining to an average of $3.93 in 2022.