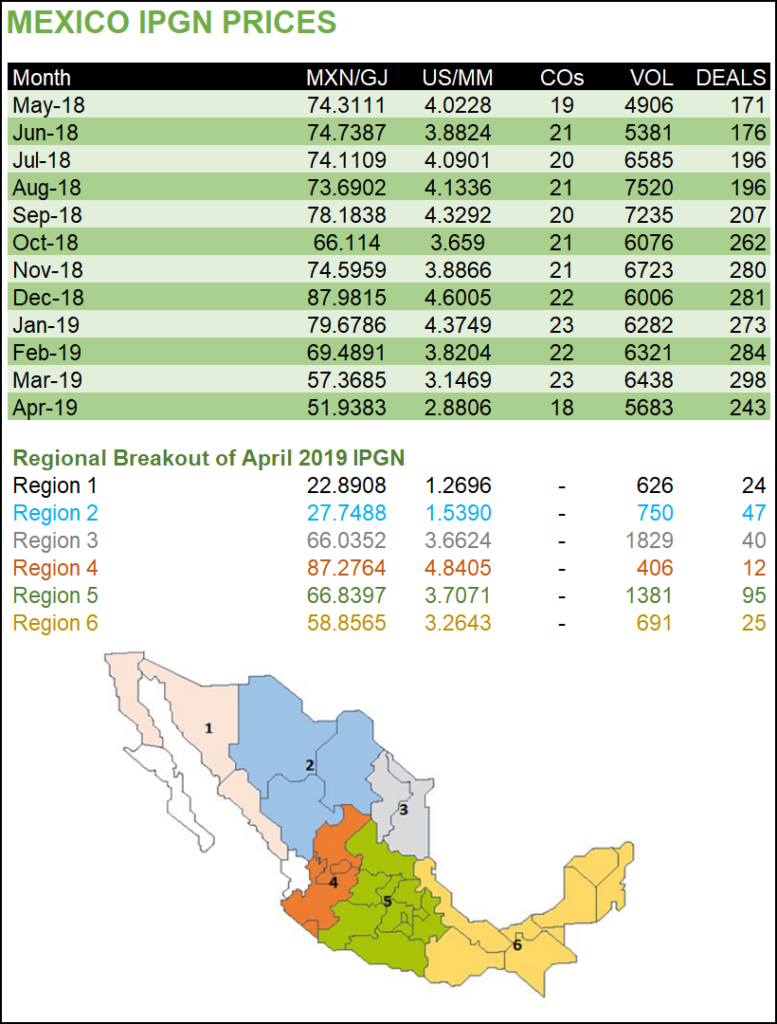 Marketers reported an average price of 51.938 pesos/gigajoule (GJ), or $2.88/MMBtu, making April the first month for which the IPGN has fallen below $3/MMBtu since its inaugural publication in July 2017.

The April price was down from the April 2018 average of 71.854 pesos/GJ ($4.132/MMBtu), reflecting a downward trend in the U.S. indexes to which a majority of transactions in Mexico are linked.

The IPGN breaks Mexico into six regions, with regions 3 and 5 accounting for the highest volumes traded in April at 1.829 Bcf/d and 1.381 Bcf/d, respectively.

The Monterrey hub in Nuevo León is expected to add 200 MMcf/d of transport capacity by its projected startup date in the first half of 2020, according to a recent presentation by Cenagas’ Emmanuel Silva, adjunct executive director of planning.

The Reynosa loop project in Tamaulipas, also slated to come online in 2020, is expected to add another 350 MMcf/d, according to the fourth and final revision of the 2015-2019 Sistrangas expansion plan approved recently by energy ministry Sener.

Region 2 includes Chihuahua state, where the El Encino trading hub is expected to take shape upon the completion and interconnection to the Sistrangas of Fermaca’s Wahalajara pipeline system.

The final three sections of Wahalajara will have a combined transport capacity of 2.08 Bcf/d, and are due online this month, according to the latest Sener projections.

Pipeline imports from the United States accounted for 60.37% of supply, or 3.222 Bcf/d, on Mexico’s Sistrangas national pipeline grid on Monday (May 20), up from 2.936 Bcf/d on the same day last year, according to data from energy ministry Sener.

For the country, pipeline and liquefied natural gas (LNG) imports accounted for 5.434 Bcf/d, or 67.4% of total supply in February, the latest month for which Sener data is available. This is up from 5.189 Bcf/d, or 65.3% of total supply, in the same month a year ago.

April also saw the conclusion of the Consulta Pública, or public consultation, a nonbinding process conducted by Cenagas to gauge expected growth in gas demand from the marketing, industrial, power generation, and gas distribution segments over the next 15 years.

The results show potential gas demand from respondents reaching 3.525 Bcf/d by the end of President Andrés Manuel López Obrador’s term in 2024, up from 1.589 Bcf/d expected for 2019.

“Overall, the demand projections are consistent with what was foreseen in initial Cenagas planning: that natural gas demand in Mexico would grow by about 0.5 Bcf/d each year,” former Cenagas ISO CEO Eduardo Prud’homme wrote last week in a column for NGI’s Mexico GPI.

“Given this figure, along with the decline in Mexico’s domestic production of around 150-200 MMcf/d per year, the opportunity for U.S. exports adds up to total growth of around 4 Bcf/d by the end of 2024 as compared to today.”