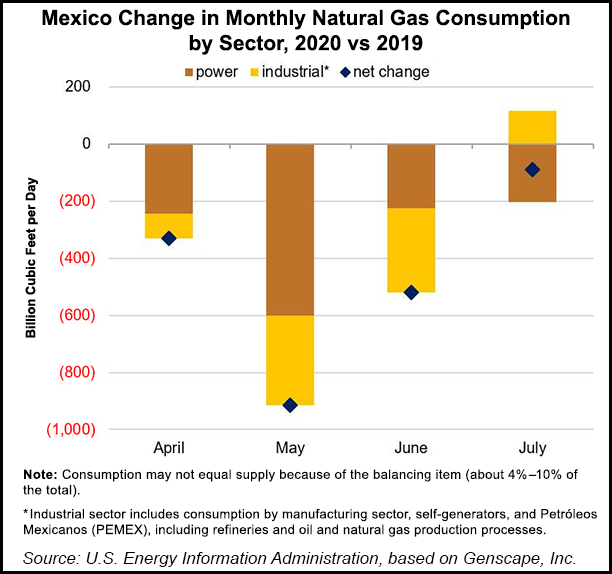 The Covid-19 pandemic dealt a substantial blow to Mexico’s natural gas demand between April and July, according to the U.S. Energy Information Administration (EIA).

The largest reductions occurred in May, when consumption across all sectors averaged 7.8 Bcf/d, down 10% year/year (y/y), researchers said. They noted that natural gas in Mexico is consumed primarily by the power generation and industrial sectors.

Gas-fired power plants accounted for the largest share of the decline in May, with their consumption averaging 14% (0.6 Bcf/d) less than in May 2019.

The countrywide generation load declined by 11%, or 3.1 terawatt-hours (TWh), versus May 2019 amid efforts to contain the spread of the virus, according to the EIA team.

“A large portion of electricity demand in Mexico is generated by the tourism industry,” which contributes 17% to Mexico’s gross domestic product (GDP), researchers said. “The reduction in trade, tourism and other economic activities led to a significant reduction in overall electricity demand, which declined by 7.4 TWh (7%) in April-July 2020 compared to the same period in 2019.

“Industrial sector consumption also declined in April-June 2020, averaging 5% lower than during the same period last year, but it has begun to gradually recover since July.”

[Understand how the Mexican natural gas market has evolved over time with on-the-ground insight from active participants. Get the analysis of NGI’s most-recent market survey in Mexico.]

On the supply side, meanwhile, EIA analysts said the pandemic has not significantly affected domestic production. The impact on upstream activity generally has been less pronounced in Mexico than elsewhere in the region, as President Andrés Manuel López Obrador has stuck to his produce-at-any-cost strategy.

“Mexico and Brazil have been the two main Latin American countries that have continued to drill through the epidemic,” said NGI’s Patrick Rau, director of strategy and research, in a recent podcast.

Sections of Fermaca’s Waha-to-Guadalajara pipeline system have begun to displace imports to the Manzanillo regasification terminal on Mexico’s Pacific coast, researchers said, while the 2.6 Bcf/d Sur de Texas-Tuxpan subsea pipeline has displaced imports to the Altamira terminal on the country’s east coast.

Altamira recorded no LNG imports from November to April, and it has imported only three cargoes since then, researchers said.

Genscape analyst Ricardo Falcón told NGI’s Mexico GPI last week that pipeline gas flows from the United States to Mexico were exceeding 6 Bcf/d month-to-date in August, up from the 5.3 Bcf/d reported by the U.S. Department of Energy for the first quarter of 2020.

Exports from West Texas and South Texas were relatively flat month/month, he said, while exports from California and Arizona had jumped by 12% and 6%, respectively.

Despite uncertainty around the pandemic and some of López Obrador’s energy policies, multinational firms remain eager to expand their natural gas footprints in Mexico, Rau said.