Infraestructura Energetica Nova (IEnova) more than doubled its earnings during the third quarter over the year-ago period, lifted by prior acquisitions and the startup of natural gas pipelines in northwestern Mexico. 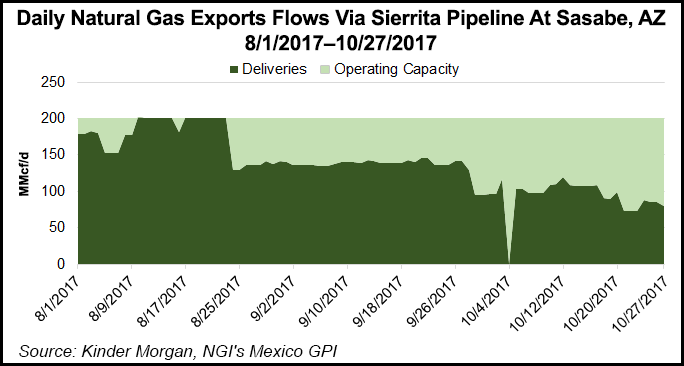 The earnings boost was largely because of two acquisitions in 2016, buying an additional 50% stake in subsidiary Gasoductos de Chihuahua and the Ventika wind farm, management said during a conference call on Thursday. Gasoductos de Chihuahua transports natural gas and liquefied petroleum gas in Mexico, with assets that include the Samalayuca natural gas pipeline and Gloria a Dios compressor station in Chihuahua and the Los Ramones I and San Fernando pipelines, both in the northeastern part of Mexico.

The pipelines are part of the ongoing buildout — by IEnova and other developers — of the natural gas transport infrastructure in northwestern Mexico. The projects are anchored by long-term transport agreements with the federal power company, the Comision Federal de Electricidad (CFE).

Pre-tax net profit from IEnova’s natural gas business, which is shared with joint venture (JV) partners, came to $136 million in 3Q2017, versus $81 million in the year-ago period.

However, management also reported that a force majeure was still in place on the 510 MMcf/d Guaymas-El Oro, the downstream segment of IEnova’s Sonora pipeline, following damage caused by third parties on Aug. 23.

“There is no economic impact and the [upstream] Sonora Sasabe-Guaymas segment remains in full operation,” said CFO Nelly Molina.

The Sonora pipeline receives gas imports from Sierrita Pipeline at Sasabe in Arizona. Conflicts with Yaqui indigenous communities have prevented the company from carrying out repair work on the damaged segment, according to press reports.

The force majeure on Guaymas-El Oro appears to have curtailed imports at the Sasabe border crossing, according to the NGI Mexico Border Tracker.

“On August 23rd, Sasabe was flowing at 100% capacity but by the next day flows had dropped to just 65%,” NGI market analyst Nathan Harrison said.“Flows have continued to decline and it doesn’t look like they have recovered above 73% utilization since. Currently the pipeline is flowing at just 40% of its listed operating capacity.”

Earlier this month, IEnova acquired an additional 25% interest in the Los Ramones II Norte gas pipeline from Petroleos Mexicanos (Pemex), upping its indirect stake to 50%. The deal is valued at $520 million, including $231 million in cash and the assumption of $289 million in outstanding debt.

“We expect to close this transaction in the fourth quarter of this year, subject to standard closing conditions and [regulatory] approval,” said Arturo Infanzon Favela, chief mergers/acquisition and planning officer.

IEnova is also building the 2.6 Bcf/d Sur de Texas-Tuxpan marine pipeline in a JV with TransCanada Corp. The $2.1 billion project extends from the maritime border with the United States, near Brownsville, TX, and terminates at the Port of Tuxpan in Veracruz state.

“The marine pipeline is in full construction, so it’s on schedule to begin operations by the end of 2018,” said Chief Development Officer Tania Ortiz Mena.

“I think they would like to issue the definitive policy by the end of this year,” she said. “That would create an obligation to create those inventories and therefore build that infrastructure, and we do have a project under development that would allow us to participate in that opportunity.”

Earlier in the quarter, IEnova signed long-term firm capacity contracts with Valero Energy Corp. for three liquid fuel storage terminals under development in Mexico. The projects include a marine facility in Veracruz on the Gulf Coast, as well as two inland terminals in Puebla and Mexico City.

“Valero plans to import refined products including gasoline, diesel and jet fuel, and store them at the Veracruz marine terminal,” the company said in August. “Locally, the products will be distributed by truck and they will be transported to Puebla and Mexico City by rail.”

IEnova estimates that it will invest $275 million to build the three terminals, which are due to start commercial operations during 4Q2018 and in the first half of 2019.

On Thursday, management also said the company plans to participate in an upcoming auction for renewable energy projects. The auction, scheduled for November, would be the third that Mexico has held since the energy reforms began in 2013.