Mexico reforms signed into law in August by President Enrique Pena Nieto are critical steps for the energy sector to welcome an influx of foreign investment, offering a “golden opportunity” for California with its location and historic ties, state energy officials said on Tuesday. 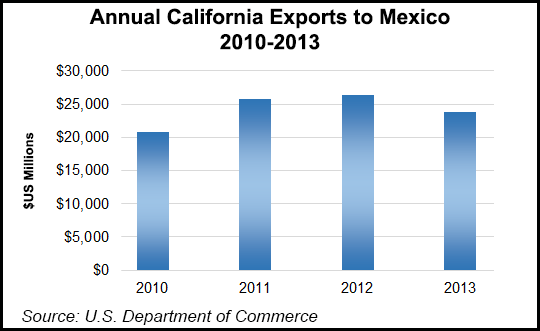 Pena Nieto signed legislation to facilitate private investment and development in the electricity and oil and gas sectors (see Daily GPI,Aug. 14). Weisenmiller and Rossi likened the action to Mexico’s national electric utility, Comision Federal de Electricidad, which owns and operates an electricity market much like California’s.

While touting California’s aggressive climate change and renewable energy goals, Weisenmiller and Rossi said there are now many companies doing business in the state as a result, and they can help Mexico implement reforms as it seeks to meet targets to reduce emissions and expand use of renewables.

“By doing so, California and U.S. energy companies will create more jobs and tax revenue on both sides of the border and build an even stronger economic partnership,” Weisenmiller and Rossi said.

Brown and Pena Nieto agreed to pursue a collaboration on climate change, energy and trade when they met in August.

“Over the coming months, officials in California and Mexico will initiate efforts to take action on the areas of cooperation identified in the [agreements] and explore ways to further expand trade and investment, including in the energy sector,” the blog said.

The two officials said Mexico is California’s largest export market, and two-way trade in goods between Mexico and California totaled more than $60.1 billion in 2013. “The energy reforms in Mexico allow for this collaboration to continue and result in greater economic growth and the achievement of climate and clean energy goals on both sides of the border.”