“Investors are waiting to see if U.S. President Biden will defend the interests of the North American companies that have money invested in Mexico and that are financed by development banks in North America,” Antonio Prado, seasoned international lawyer and executive at consultancy EnerSalpra, told NGI’s Mexico GPI. 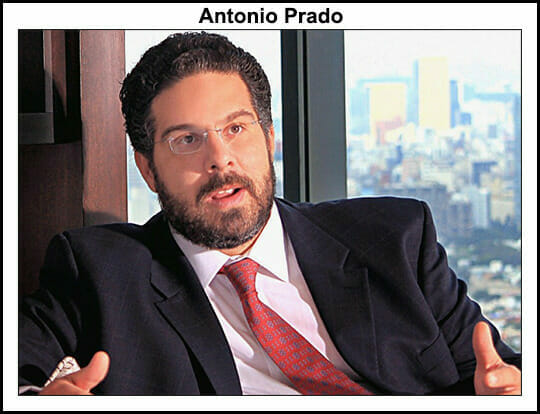 “There’s a lot of hope that there will be a formal declaration announced by the U.S. government because what we’re seeing would imply violations to the United States-Mexico-Canada Agreement (USMCA),” he said.

Prado, who started his own boutique energy law firm EnerSalpra in Mexico in 2020, worked previously at Holland & Knight for seven years. Before that, he was a lead lawyer at the Comisión Federal de Electricidad (CFE), the head of legal compliance at Pemex, and general counsel at the Mexican Energy Ministry Hydrocarbons Section (Sener). At EnerSalpra, Prado and associates help to protect the investments of energy companies with projects in Mexico.

Prado holds a Master of Laws degree from the Tulane University Law School and a bachelor’s degree in law from the Universidad Panamericana in Mexico City.

NGI: Last week, we saw power outages across Mexico related to the Texas energy crisis. What are your thoughts on what happened?

Prado: I believe it is the result of the extreme dependence of Mexico on natural gas coming from south Texas. Most of the electricity produced by Mexico comes from natural gas plants (around 60%). This is exactly why it doesn’t make sense for Mexico to curtail domestic generation by renewable sources.

While the country needs gas to run its normal generation operations, Mexico generates part of its power demand with hydro, small nuclear capacity, coal, diesel and fuel oil. That matrix has been proven to be insufficient and does not generate enough power.

The Comisión Federal de Electricidad’s (CFE) recently published business plan delays generation from renewable sources until 2027. I really find no logic in this.

NGI: One of the central issues in the industry thus far in 2021 has been the government proposal to modify the current electricity law. What are your thoughts on this proposal and what signal does it send to the Mexican energy sector?

Prado: Independent of the issue of sovereignty that has been promoted by the current government – which I think is a dogmatic subject that is very well-known and has been mentioned repeatedly – I think what the government really wants is control over the electricity sector, but at the same time they need it for tax purposes. It is well known that about 70% of CFE’s revenue comes from supplying electricity for industrial and commercial clients.

Some clients are now in situations in which the government has insisted they go back to CFE´s supply and terminate their self-supply energy contracts.

And, what many of these companies have said to [electricity marketing subsidiary] CFE Calificados is: We can’t do that because we have take-or-pay clauses in our contracts (specifically with renewable sources). This has been communicated to the government.  By terminating the self-supply regime, the government would have free access to supply these companies with energy.

These companies need electricity. So, CFE hopes that with a legal change, these companies will have to immediately return to buy supply from CFE.

NGI: You mentioned the take-or-pay contracts, which is something we heard regularly during the first year of this administration regarding natural gas and pipeline deals. With the proposed changes to the electricity law, would that eliminate existing take-or-pay contracts?

What that means is that the clients would return to CFE and that there would no longer be a legal way to provide them with energy because there wouldn’t be available permits and the existing ones would be revoked on strictly discretional terms. Even if the dispute entered into a legal proceeding, the permit might be cancelled during the process. Federal Judges will have a lot of say as to whether unconstitutional terminations could be suspended by injunctions.

A company can’t operate without a permit and the companies would have to immediately return to sign an electricity service contract with CFE. That is one part of this.

On the issue of power purchase agreements with independent power producers (IPPs), all of the plants were built so that CFE could exclusively buy the energy produced by those plants, which are all combined-cycle operations. What is happening now is that, with the proposed changes to the electricity law, the companies that constructed the plants are now going to have to demonstrate that the plant is profitable for CFE. And if it’s deemed not profitable, and the companies don’t accept the terms the CFE determines as fair, their contract will be cancelled. And, if the terms are renegotiated and the companies don’t accept the rates that CFE demands, they’re left without a contract, and with a plant no longer in operation. The companies would have to request a new permit to operate the plant under the current law, but there is no guarantee such new permits will be awarded.

Prado: I think there are really two. The first, which I think is the biggest worry right now, is that the permits for generation companies could be taken away from them. This would mean the end of self-supply contracts for individual companies.

A second concern is: What’s going to happen to all the projects that have already invested money to be developed, particularly now that all the processes and permits required for continued development are stopped in the CRE?

There are also two things that investors are really waiting to see currently. The first is to see if there will be more flexibility in electricity policy with the arrival of President Biden in the U.S. Investors are waiting to see if Biden will defend the interests of the companies that have money invested in Mexico and North America that are financed by development banks in North America. A lot of the projects being developed have 15–20-year credit agreements with the North American Development Bank (NADBANK) or with the U.S. International Development Finance Corporation [former OPIC], for example. If you take away their possibilities to operate, the banks suffer and are left without collection rights. And even worse, if the possibility of continuing to develop or operate the project is lost, then companies don’t have a way to continue to pay off the debt owed to develop the project.

So, if you take away the permit for the project, there’s no way that this project can make payments since no generation or supply is permitted. The assets and money invested become useless, and the projects no longer have any value at all.

[For the third year, NGI is surveying active players in the Mexico natural gas market to track the evolution of the industry as it continues to open. If you buy or sell natural gas in Mexico or on the border, please contribute your perspective. It takes two minutes to complete the survey linked here, but the transparency it provides empowers a nation.]

Prado: Yes, a lot. There is a lot of hope that there will be a formal declaration announced by the U.S. government because what we’re seeing would imply violations to the United USMCA. What people in the Mexican energy sector are hoping for is a strong stance where the U.S. says: If you’re going to violate the terms that we’ve established, I’m going to have to enforce it through other aspects of the USMCA.

NGI: It’s interesting that Mexico has yet to respond to the letters sent by the U.S., because in them they do mention possible violations of the USMCA. Why do you think Mexico hasn’t responded?

Prado: The Mexican government says that what they are doing doesn’t violate the USMCA because the country has the sovereign right to change its own energy legislation. But that isn’t actually true. The protection agreement of the USMCA applies to the energy sector because it had already been opened to private competition when the USMCA was signed.

Additionally, it applies to the Trans-Pacific Partnership (TPP) agreement. So, even if Mexico were to modify its laws, it would be noncompliant with the protections established in the TPP and USMCA that apply to energy investments. Should formal changes to the current laws apply, then we can surely expect international claims in terms of USMCA as they pertain to Bilateral Investment Protection Treaties.

This is the legal argument and the government is going to have a dilemma. It will either have to face litigation or modify what it wants to do to be more flexible. But, at this point it doesn’t seem that the government wants to be more flexible. President López Obrador said just weeks ago that he isn’t willing to change even a comma in the initiative. Mexico’s Congress will have to evaluate the risks of taking further steps. Domestic federal courts and Mexico’s Supreme Court will have the last word.

NGI: You mentioned the CRE and the ongoing issues with permits. What are your thoughts about the changes this administration is making to the regulatory bodies?

In other sectors these changes haven’t occurred as quickly or as clearly, but the president has expressed interest in weakening other regulatory agencies in other sectors as well.

Prado: The midterm elections are the other hope that investors have for the rescue of the sector. The first hope is Biden, without question. The industry wants to see what actions he or his government might take to protect North American investments in the Mexican energy sector. Power and oil and gas investments were made in Mexico in good faith by international companies and should be protected.

The second hope of investors in the industry is that there will be a change in composition of the lower house and that the next three years transform into a legislative battle and that energy contracts are not cancelled or drastically modified. If the ruling party loses control of the lower house, the hope is that the existing energy projects will remain in place at least another three years and allow for new strategies, perhaps with the United States, to develop.

Editor’s Note: NGI’s Mexico Gas Price Index, a leader tracking Mexico natural gas market reform, offers the above question-and-answer (Q&A) column as part of a regular interview series with experts in the Mexican natural gas market. Prado is the 50th expert to participate in the series.