Mexico’s economy posted solid growth during the second quarter, with oil exports climbing 34.4% in the first five months of 2017 year/year, according to research by the Federal Reserve Bank of Dallas. 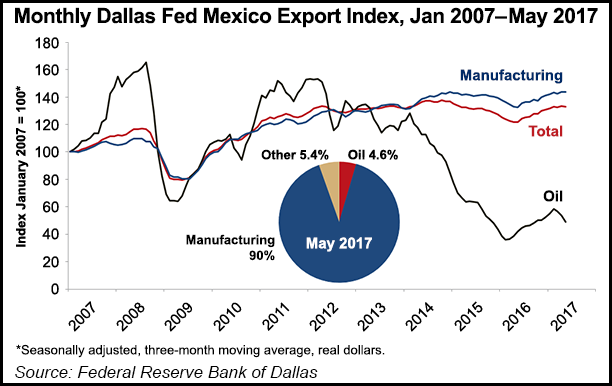 Industrial production (IP), including oil and gas extraction, utilities, manufacturing and construction, grew 0.1% in May after falling for three consecutive months, based on advanced estimates provided by the government.

Mexico’s manufacturing IP fell 0.3% in May after expanding 0.6% in April. The three-month moving average of total IP has dipped in recent months, while manufacturing IP has been flat, the Fed noted.

Gross domestic product grew 2.4% annualized between April and June, a slightly slower pace than the 2.7% growth in the first three months of this year. Activity mostly was driven by the service sector, up 3.2%, while goods-producing industries, including manufacturing, construction, utilities and mining, increased by only 0.4%.

Although oil exports have risen sharply, total exports grew only 0.9% in May, but they had fallen by 2.2% in April from a year ago. Exports year-to-date through May rose 7.8% from the same period of 2016. Manufacturing exports were 6.3% for the first five months of 2016.

Meanwhile formal-sector employment, i.e. jobs with government benefits and pensions, grew at an annualized rate of 4.8% in June after expanding 4.2% in May. Employment growth in 2016 was 4.1%, versus 3.8% growth in 2015.

The peso gained ground in June, according to the analysis. Mexican currency averaged 18.1 pesos per the U.S. dollar in June, a 3.4% gain from May. The peso is up 18% since January and “is practically back to its level seen a year ago.”

Mexican currency initially weakened in 2016 in anticipation of increases in U.S. interest rates, as well as policy and economic uncertainty following the U.S. presidential election.

“With stabilization of the peso/dollar exchange rate, the share of peso-denominated government debt held abroad has declined in recent months,” said researchers. “This debt share has hovered near 35% year-to-date.

“The extent of nonresident holdings of government debt reflects Mexico’s exposure to international investors, whose holdings could quickly reverse if they perceive an abrupt change in market sentiment toward Mexico.”