The Mexican upstream regulator has called off what would have been the second deepwater farmout by Petroleos Mexicanos (Pemex) because of a lack of interest, while also authorizing the state-owned producer to carry out additional exploration work on the project. 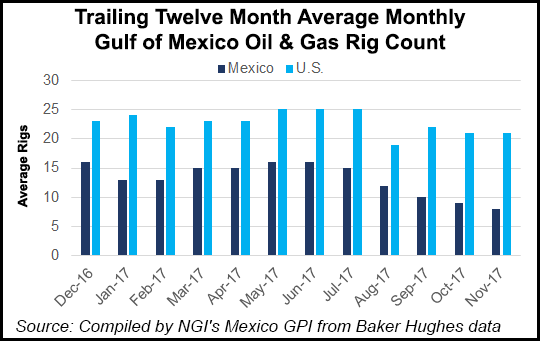 The Comision Nacional de Hidrocarburos (CNH) last week approved a resolution to cancel the farmout of the Nobilis-Maximino project in the Gulf of Mexico (GOM) Perdido Fold Belt.

The auction for the project was to be held on Jan. 31 in conjunction with licensing round 2.4, which is to offer 29 deepwater blocks across three GOM basins.

“Petroleos Mexicanos will evaluate whether to hold the farmout at a more opportune moment in the future and will continue taking steps to reduce the project’s risk,” the company said.

CNH recently reported that 29 bidders had signed up to prequalify for the deepwater auctions, without specifying which two they were registering for.

Last month the regulator also agreed to cut Pemex’s stake in Nobilis-Maximino and reduce the project’s cash carry and minimum work program. The changes, made at Pemex’s request and based in part on industry feedback, were intended to make the farmout more attractive to potential partners.

Those changes were made to no avail. The sign-up period for Nobilis-Maximino ended last Tuesday (Dec. 5) without recording a single request to prequalify for the tender.

“Given that the predominant medium- to long-term outlook for crude prices is between $50-60/bbl, international oil companies are being very cautious about committing themselves to complex projects that require large investments, and where the recovery of those investments occurs over the long term,” Pemex said.

“Such is the case with Nobilis-Maximino, which would require more than $10 billion to develop and is not expected to reach commercial production for at least seven years.”

Pemex officials also said the project was more geologically complex, contained more natural gas and was deeper underwater than the Trion project, also in the GOM, which it farmed out to Australia’s BHP Billiton Ltd. in December 2016.

“Another factor influencing the appetite for new projects is the investment commitments that some potential bidders have recently taken on,” particularly in Brazil, Pemex said.

On the same day it cancelled the Nobilis-Maximino farmout, the CNH also authorized Pemex to carry out additional exploration studies and drill an exploration well in the Maximino area of the project. Nobilis-Maximino holds an estimated 220 million bbl of mostly light oil and 524 Bcf of natural gas in proved, probable and possible, i.e. 3P reserves, according to CNH.

The additional work on Nobilis-Maximino was one of 22 exploration plans that CNH approved last Thursday. The plans, for which Pemex expects to drill at least 30 wells, were mostly for onshore and deepwater areas in southern Mexico, as well as one unconventional block in the northeast Tampico-Misantla basin.

Last August, the Mexican Energy Ministry (Sener) granted Pemex a two-year extension to develop the 101 exploration blocks it was assigned after the energy reforms began in 2013, despite the company’s having met the minimum work requirements on only about one-third of those areas.

To date, CNH has approved the exploration plans for 82 of the 101 blocks. Under these plans, Pemex has committed to drilling at least 128 wells before the extension period expires in August 2019. Those plans include 18 unconventional wells, approved during November, in the northeastern Burgos Basin, which is Mexico’s largest producer of non-associated gas.

Pemex is also carrying out an aggressive farmout program of mostly onshore blocks. Earlier this year, CNH approved the migration of seven areas to a new contract model, an initial step in its preparation for farmouts.

All of the blocks are onshore in the Sureste basin in Veracruz and Tabasco states in southern Mexico. Combined, 3P reserves are estimated at 392 million boe of mostly light and medium oil, according to a December investors presentation by Pemex.

Pemex also plans to relaunch the farmout of the shallow water Ayin-Batsil block, which is estimated to hold 359 million boe of heavy oil, according to the presentation. The block failed to draw any bids in an October auction that awarded two onshore farmouts to Egypt’s Cheiron Holdings Ltd. and DEA Deutsche Erdoel AG of Germany.

In related news, CNH last week signed 20 contracts with the winners of bidding rounds 2.2 and 2.3. Natural gas-rich blocks dominated the acreage awarded in the two tenders, held jointly in July. The successful bidders now have 180 days to present their exploration plans to CNH.

The signing ceremony on Friday excluded a 21st contract since its winner, a consortium of Chinese and Mexican companies, failed to pay the $2.18 millioncash bonus it had offered during Round 2.3.

CNH said it had filed the paperwork to transfer the block to the second place bidder, a consortium of U.S. and Mexican firms, which now has 140 days to sign the new contract.