Hydrocarbon projects awarded through bid rounds in Mexico from 2015 to 2018 can reasonably be expected to add 280,000 b/d of crude output by 2024, according to the director of upstream association AMEXHI, Raymundo PiÃ±ones. 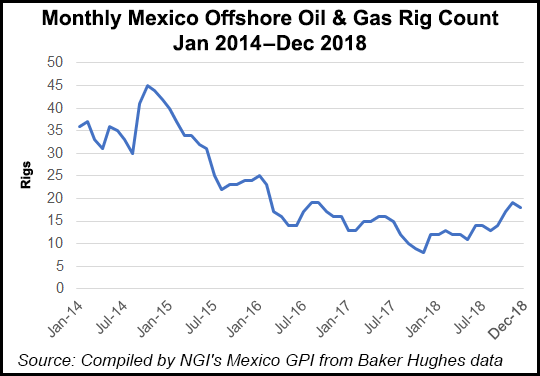 Based strictly on the projects that have so far obtained approval for their development plans from Mexico’s ComisiÃ³n Nacional de Hidrocarburos (CNH), 280,000 b/d “sounds like an achievable goal,” said PiÃ±ones, a petroleum engineer who spent 10 years at A.P. Moller-Maersk A/S in various oil and gas roles.

PiÃ±ones emphasized AMEXHI’s view, however, “that the success of the implementation of the contracts should be measured by the fulfillment of the contractual obligations, and by investment.” He also cautioned that the continuation of bid rounds, which LÃ³pez Obrador has suspended for three years, is essential for maintaining investment levels and output increases after 2024.

The four most advanced projects are expected to provide $6 billion/year in royalties to the Mexican government over their lifespans, PiÃ±ones said, citing a report by the Energy Policy Research Foundation’s Michael Lynch. This amount equals half the yearly revenue collected through gasoline taxes, PiÃ±ones said.

Pemex, which still supplies essentially all of Mexico’s hydrocarbon output, reported crude production of 1.9 million b/d in November, down from a peak of 3.4 million b/d reached in 2004. Gross natural gas output averaged 3.76 Bcf/d, down from a high of 6.52 Bcf/d attained in 2009.

Pemex CEO Octavio Romero Oropeza has pledged a 50% increase in natural gas output by the state-owned firm by 2024, to be driven mainly by associated gas from oil wells.

Multiple projects awarded through the reform have reported advancements in recent days.

Talos Energy Inc. said earlier this month it successfully completed with its partners the Zama-2 shallow water appraisal well at Area 7 in the Sureste Basin. Zama-2 was drilled about 1.3 miles to the north of the Zama-1 well, which struck oil in 2017.

Talos was “able to achieve our primary goals of understanding the depositional environment and the presence of thick sand bodies needed for robust aquifer support, both of which help with ultimate recovery, CEO Timothy S. Duncan said.

“We are staying focused on working with urgency to meet the project timeline to achieve first oil by the second half of 2022.”

“We believe offshore Mexico has become one of the most sought-after exploration basins in the world,” Duncan said, adding, “We will provide additional details of our 2019 capital program and progress on our ongoing offshore Mexico activities in the coming weeks.”

In related news, Australia’s BHP Group plc said last Tuesday the first appraisal well at the Trion deepwater asset struck oil, “in line with expectations.” BHP claimed it is “the first well drilled by an international operator in the Mexican deepwater.”

BHP holds a 60% operating interest in Trion, which is in the Perdido Fold Belt, with the remaining stake held by Pemex. BHP acquired its Trion stake for $624 million in 2016 through Pemex’s inaugural farmout auction.

CNH in December postponed for six months a third farmout tender for stakes in seven Pemex blocks that was previously scheduled for next month.

These developments follow the approval this month by CNH of a five-well, $33 million appraisal and exploration campaign in Veracruz state planned by Jaguar ExploraciÃ³n y ProducciÃ³n. The plan comprises four appraisal wells to evaluate and delineate the Guzmantla and Orizaba formations, and one exploration well with the goal of adding gas reserves in the San Felipe and Guzmantla formations, according to CNH.

Jaguar, in partnership with Canada-based Sun God Resources Inc., secured 11 of the 24 gas-rich blocks on offer in Mexico’s onshore Round 2.2 and 2.3 tenders in 2017.

Dionisio Garza Sada, CEO of Jaguar’s parent company Grupo Topaz, told El Financiero that Jaguar plans to invest about $200 million over the next two years in the 11 areas won through the bid rounds.

Jaguar also announced last May a joint venture with Vista Oil & Gas SAB de CV, through which Vista obtained a 50% stake in three of Jaguar’s gas blocks in Veracruz and Tabasco states. Vista is helmed by Miguel Galuccio, former CEO of Argentine state oil company YPF SA, which has pioneered development of the Vaca Muerta formation in the South American country.