A unit of Bismarck, ND-based MDU Resources on Thursday launched an open season for a proposed $650 million natural gas transmission pipeline connecting plentiful Bakken Shale supplies to markets in the Great Lakes. Planning for the 375-mile pipeline is under way at MDU’s WBI Energy Inc. 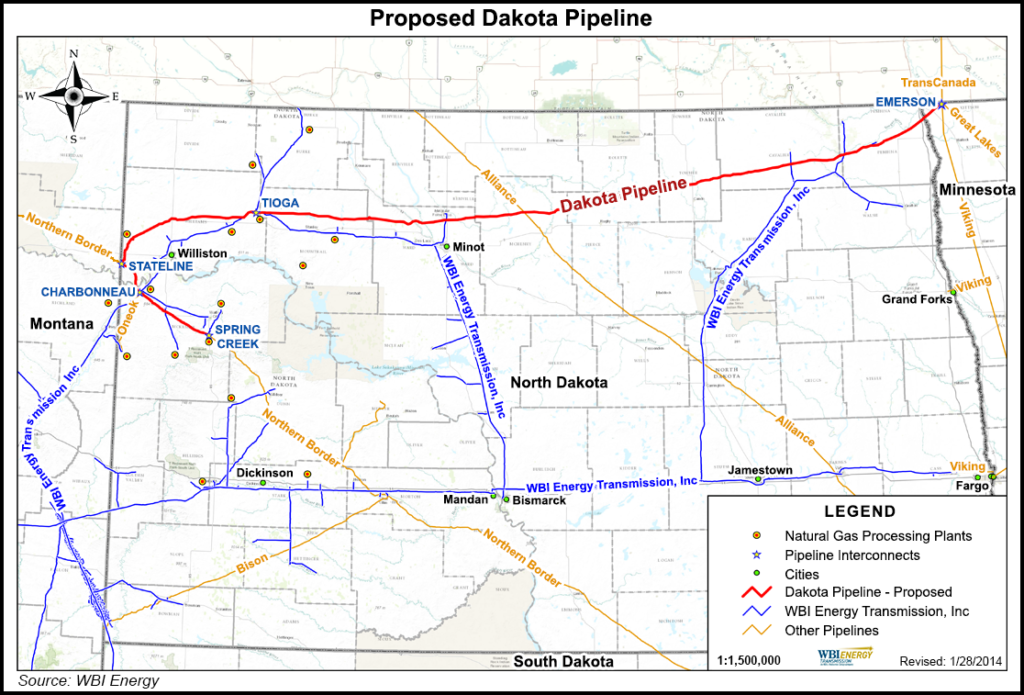 Binding capacity commitments for firm transportation rights are being sought over the next four months. The open season ends May 30, according to the WBI website. The targeted in-service date for the 24-inch diameter pipeline is Nov. 1, 2017. All precedent agreements must be completed within 30 days following the close of the open season unless WBI agrees to extend that deadline.

With rapidly growing gas production in western North Dakota, demand across all of the major markets has picked up in the Great Lakes states of Minnesota, Wisconsin, and Michigan as well as broader Midwest markets, MDU said.

The Dakota Pipeline will offer “another avenue to move Bakken-produced natural gas,” and it is intended as a complement to MDU’s other ongoing activities to build connections to several gas processing facilities, said MDU CEO David Goodin. Increased capacity for this project will help take away added production that is forecast as well as helping reduce the large portions of flaring of existing production, Goodin said.

MDU’s open season prompted Gov. Jack Dalrymple, who has been leading efforts to prod industry to find new ways to cut flaring, to committ to working with WBI on the pipeline project. The pipeline is slated to circle the northwestern edge of the state from Spring Creek around Williston to Tioga, and from that point traversing the state in a nearly straight easterly direction, crossing into the northwest corner of Minnesota and terminating at Emerson on the Canadian border.

“This pipeline is part of the solution [to flaring], and I commend MDU Resources and WBI Energy for their commitment to North Dakota and to the responsible development of our energy resources,” Dalrymple said.

The initial design is for a 400 MMcf/d capacity, and depending on how robust the open season commitments are, it could be increased to 500 MMcf/d, according to WBI CEO Steven Bietz. The proposed route will provide access for Bakken gas to move into interconnects operated by Great Lakes Gas Transmission Ltd Partnership, Viking Gas Transmission Co., and potentially TransCanada Pipelines Ltd. in northwest Minnesota.

There are two compressor stations and various measurement and interconnection facilities to be included in the Dakota Pipeline, according to WBI’s website description. Two existing north-south WBI transmission pipelines will intersect the proposed Dakota Pipeline route as well as existing northerly running pipelines operated by Northern Border Pipeline and Alliance in the west-central and east-central parts of the state, respectively.