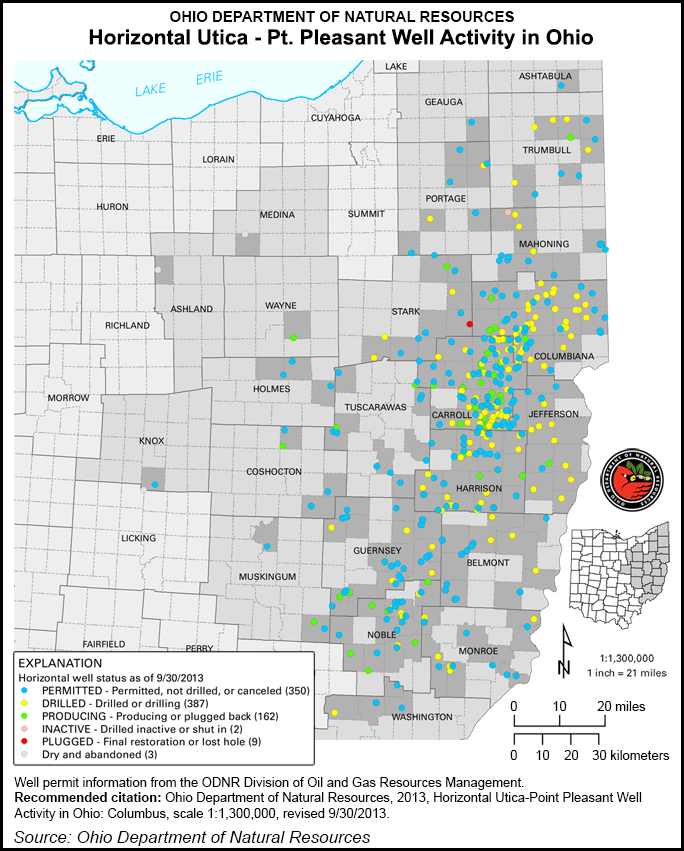 Dover, OH-based Red Hill Development LLC, a unit of the Kimble Cos., is going into business with American Energy-Utica LLC (AEU) through a joint venture (JV) that would develop oil and gas prospects through Red Hill’s RHDK Oil & Gas.

In the Tuscarawas Valley region, Red Hill holds an estimated 50,000-plus acres in Guernsey and Harrison counties. It also operates more than 600 shallow and deep conventional and unconventional wells on leased property in Tuscarawas, Coshocton, Harrison and Guernsey counties.

The JV already has begun the well permitting process, which would involve only a portion of Red Hill’s acreage, said RHDK Manager Keith B. Kimball. If all things progress smoothly, the first well scheduled in Harrison County could begin producing by the end of the year.

“We’ve spent a great deal of time and energy studying the Utica Shale and the best available technologies to use in order to effectively develop the Utica,” Kimble said. “We have a lot of history drilling through the Utica and know it can be challenging and will require a tremendous amount of capital. The family has explored all options so that we could provide the best opportunity for expeditious, safe and productive development of our leases.”

The new partnership would provide a “big addition to the economy, with quite a bit of drilling activity,” as well as royalties and jobs, he said. It’s too soon to speculate on the JV or the number of jobs to be created, but Red Hill, now with 30 full-time employees, expects to add another 50 positions as the partnership progresses.

Financial terms of the agreement were not disclosed, but the JV has been in the works for about a month.

In August, analysts told NGI’s Shale Daily that American Energy had bought some Utica property from long-time McClendon partner EV Energy Partners LP (see Shale Daily, Aug. 21). EV officials had indicated then that they were working with an undisclosed company to develop more than 4,000 net acres in Guernsey, Harrison and Noble counties. The transaction was set to close at the end of September.

“After all of our due diligence, the best fit for rapid, safe and productive development was a joint venture relationship,” Kimball said of the new JV. He also pointed to McClendon’s prowess in the oil and gas industry.

“Aubrey’s ability to raise money for development, and his experience in horizontal drilling in general and the Utica Shale in particular, were a perfect fit for Red Hill Development.”

American Energy, meanwhile, is on the verge of completing a $1.8 billion PE and debt financing transaction, according to a report by CNBC that was confirmed by Shale Daily. The AEU unit over the next two to three years plans to purchase 80,000 acres in Ohio and would have 12 rigs in operation, according to investors.

The Energy & Minerals Group (EMG) based in Houston, is the 70% backer of AEU. Other investors include First Reserve Corp.

EMG already has a big footprint in Ohio and across the Appalachian Basin through JVs with MarkWest Energy Partners LP, among others. Two years ago MarkWest and EMG formed a midstream partnership for eastern Ohio, in which EMG has continued to invest (see Shale Daily, Feb. 26). The MarkWest/EMG venture in Ohio, among other things, is building a third 200 MMcf/d cryogenic gas processor at the Seneca complex in Noble County (see Shale Daily, June 3). Partners also are building the Cadiz complex in Harrison County, which had 185 MMcf/d of capacity in June.

Kimble Cos. employ about 500 people through businesses that provide oil and gas development, trash hauling, excavation and recycling services. It has a state-of-the-art landfill in Tuscarawas County and permitted solid waste transfer facilities in Carroll, Guernsey, Stark and Summit counties. Natural gas produced from its wells helps to power its compressed natural gas fleet.