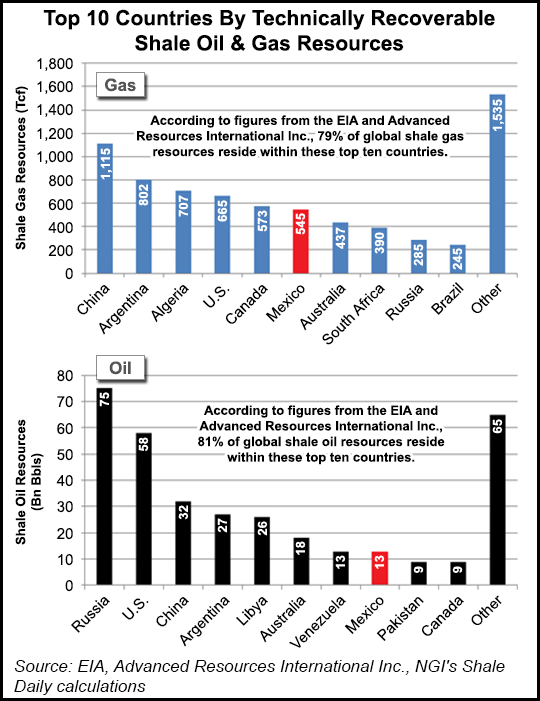 An affiliate of the Aubrey McClendon-led AELP said the “long-term landmark partnership” would be with Energy and Infrastructure Mexico Capital (EIM), a fund dedicated “solely to new investment in the Mexican energy sector, including power, upstream, midstream and other energy-related infrastructure.”

Fox and CEO Franco C. Hamdan oversee the Mexico City-based fund, founded in 2012 in anticipation of Mexico’s constitutional reform that allows private investments in the energy sector (see Daily GPI, Aug. 7, 2014). While in office between 2000 and 2006, Fox pushed for the reforms (see Daily GPI, Feb. 25, 2014; March 6, 2001). Hamdan previously worked with the Mexican private equity firm iCuadrada and is said to be related to Fox.

Oklahoma City-based AELP agreed to make a “significant,” but unspecified, investment into EIM to jointly pursue projects. No details were provided on what part of the country the partners may pursue.

“This partnership will provide significant value to both companies and to the Mexican economy,” McClendon said. “EIM’s knowledge of and investments in Mexican infrastructure coupled with AELP’s knowledge of and operation within the unconventional energy industry will produce unparalleled opportunities as this exciting project progresses.”

Hamdan said the partnership “under the right operating environment could help unlock Mexico’s unconventional energy resources and spur an energy boom, which would be transformational for the Mexican economy.”

According to its website, EIM looks to invest $250-500 million in exploration and production projects with a return on equity (ROE) of 30-40% and with a four- to seven-year investment horizon. Midstream infrastructure projects considered for financing would be for $25-50 million with an ROE of 20-25% over a five- to seven-year investment horizon. It also is interested in power project financing of $50-200 million with an ROE of 20-25% over a seven- to 10-year horizon.

“Mexico’s proximity to the U.S. market’s established infrastructure, service providers, and operators could help quickly scale the nascent Mexican shale industry and, with the right conditions, Mexico could rapidly emerge as a global leader in energy production,” Hamdan said. “We are excited about this partnership’s potential to create these favorable conditions and benefit Mexico through job creation and technology.”

Fox added that the deal with AELP is a “major opportunity” for the country’s energy production. The partners plan to work “closely with the Mexican government to advance this monumental project and enhance Mexico’s current energy policy.”