Natural gas futures traded in the green much of Wednesday, lifted by colder weather trends that pointed to increased heating demand through the second half of April. 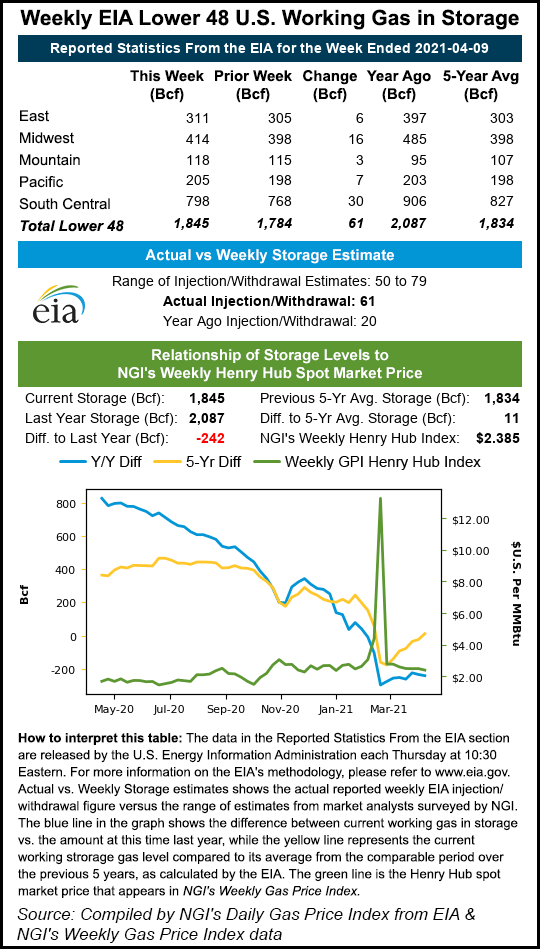 Near-record liquefied natural gas (LNG) levels continued to provide price support as well. But a sixth-straight day of gains proved elusive as traders took profits late in the session and prior to Thursday’s government inventory report.

Cash prices climbed, as they have each day this week, amid several weather systems that have ushered in unseasonably cold air and bouts of chilly rain. NGI’s Spot Gas National Avg. gained 5.5 cents to $2.520.

Bespoke Weather Services said Wednesday that already cooler trends grew more entrenched over the previous 24 hours, with both the American and European models adding 10-12 gas-weighted degree days (GWDD) to their forecasts over the next two weeks.

The bullish shift developed “thanks to more chill in the Midwest and East…It remains difficult for weather to move the needle much at this time of year, but double-digit GWDD changes in a 24-hour period are noteworthy,” Bespoke said. “This generally equates to a lot of 50s highs/30s lows in places like the Midwest,” driving heating demand.

The turn in spring weather in combination with “high LNG volumes along with higher exports to Mexico has been enough to promote a much better supply/demand balance the last few weeks,” the firm said.

LNG feed gas levels exceeded 11 Bcf on Wednesday, NGI data showed. Volumes have held near or above that threshold for a month, bolstered by ongoing demand for U.S. exports from both Asia and Europe.

EBW Analytics Group LLC said demand for natural gas this week also has been aided by a steep decline in wind output in Texas. “This required heavy utilization of gas-fired generating units,” the firms said.

Cash prices in Texas jumped on Tuesday and continued to climb in parts of the state on Wednesday, according to NGI data.

The International Energy Agency (IEA) on Wednesday raised its forecast for worldwide oil consumption this year by 230,000 b/d to an increase of 5.7 million b/d, citing inoculation efforts in the United States and Asia as well as expectations for 6% global economic growth in 2021.

“Vaccine campaigns are gathering pace and the global economy appears to be on a better footing,” IEA researchers said.

IEA’s new forecast followed an optimistic outlook for demand from the Organization of the Petroleum Exporting Countries on Tuesday. The cartel expects demand to rise by 5.95 million b/d this year, a nearly 7% increase from 2020. It also pointed to a pandemic recovery and expectations for strong economic growth this year.

Looking ahead to Thursday’s Energy Information Administration (EIA) natural gas storage report, however, analysts were generally expecting a substantial build in underground stocks, given that the recent spate of cold weather did not arrive until after the covered week. Mild temperatures and light heating demand permeated much of the Lower 48 last week.

NGI forecasted an injection of 67 Bcf, roughly on par with Energy Aspects’ preliminary estimate of 69 Bcf and the 68 Bcf build recorded in the year-earlier period.

Multiple weather systems spanned the central and eastern United States early this week, driving lows down into the 30s and 40s and fueling heating demand first in the Midwest and then farther east on Wednesday.

As the EBW analysts noted, relatively cool weather in parts of Texas along with low wind levels provided continued support for cash prices in parts of the Lone Star state.

“Just like maintaining your car, generators must be maintained to keep them running smoothly,” said Woody Rickerson, ERCOT vice president of grid planning and operations. “ERCOT must balance these necessary outages with serving load…especially given increased weather volatility” common in the spring.

After rising Tuesday, prices in West Texas leveled off and posted modest declines. Elsewhere in the state, however, cash climbed on Wednesday.

The national weather forecast continues to trend on the cooler side for next week, said Steve Silver, senior meteorologist at Maxar’s Weather Desk.

“High pressure, which has Canadian origins, will carry a round of much below-normal temperatures” beginning in the Rockies and Midwest, he said.