More pipelines are needed to deliver natural gas to power generators in Massachusetts if the state is to meet its energy requirements through 2030, according to a report conducted by Synapse Energy Economics. 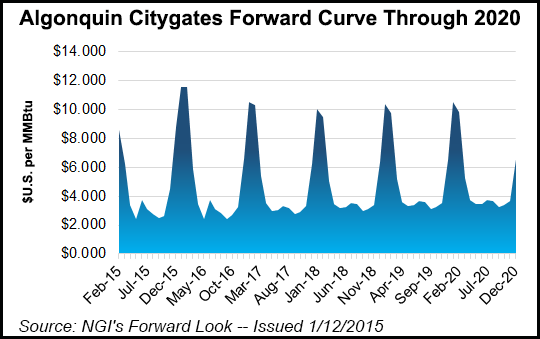 An analysis of eight different scenarios indicated that through 2019 “electric generators have insufficient supply of natural gas, which results in spiking natural gas prices,” according to the report, which was released Thursday by outgoing Gov. Deval Patrick (D).

“Scarcity-driven high natural gas prices will force economic curtailment of natural gas-fired generators in favor of oil-fired units. The combination of increased oil utilization for electricity generation together with the use of emergency measures such as demand response and the ISO-NE [Independent System Operator of New England] Winter Reliability program (through January 2018) will allow electric demand to be met. From 2020 to 2030, existing and planned capacity plus incremental pipeline capacity balances system requirements.”

Known measures — demand response or the addition of new natural gas pipelines — would allow winter peak hour gas shortages to be met between 2020 and 2030, but there is a five-year gap in the short term that will be more problematic, according to the analysis.

“Critical to this result is the assumption that winter peak hour gas shortages cannot be addressed using known measures…in years 2015 through 2019 and, as a result, gas prices are expected to reflect an out-of-balance market in those years. The electric sector responds to these high prices by shifting dispatch from gas to oil generation in the peak hour, reducing reliance on natural gas.”

The amount of pipeline additions required for the state to meet its looming energy requirements varied between scenarios, the analysts said, from lows of 600 MMcf/d in both 2020 and 2030, to highs of 800 MMcf/d in 2020 and 900 MMcf/d in 2030. The lower numbers were achieved in scenarios that included 2,400 MW of incremental Canadian transmission.

The scope of the study was restricted to expected Massachusetts natural gas demand and capacity only. “We did not examine gas constraints in the wider region, nor did we examine the effect of expected gas demand or capacity constraints outside of the Commonwealth,” the analysts said.

“This report underscores the urgent need for more natural gas infrastructure capacity, not only in Massachusetts, but throughout New England,” said Dena Wiggins, CEO of the Natural Gas Supply Association. “Massachusetts is to be commended for taking on this initiative to assess the need for infrastructure.

“Under the study’s every scenario, even those based on a low demand for natural gas, the report revealed that more pipeline capacity is critically needed in order to supply the natural gas required to meet the state’s peak winter demand for energy after 2020. In fact, the need for new capacity would have been even greater had the report looked at the requirements to serve the whole region.”

Pipelines are being built to carry natural gas away from the Marcellus and Utica shale producing areas, but not enough of them are designed to serve New England, a growing concern for a region increasingly reliant on natural gas, according to ISO-NE (see Daily GPI, Sept. 9, 2014). The grid operator “has immediate and growing concerns about the availability and flexibility of generating resources — particularly natural gas and oil-fired resources — to reliably serve the daily, round-the-clock demands of electricity consumers in New England,” according to a draft of the ISO’s annual Regional System Plan.

Forward markets at the Algonquin Citygates hub serving Boston seem to confirm the expectation that winter shortages will continue for a while. The markets currently expect prices to spike as high as $11.557 in January of 2016, and for the trend of high winter gas prices to continue at least five years out the curve.”