Massachusetts Attorney General (AG) Maura Healey on Thursday asked the state’s Department of Public Utilities (DPU) to open an investigation into phasing out natural gas amid the transition toward alternative fuels by 2050. 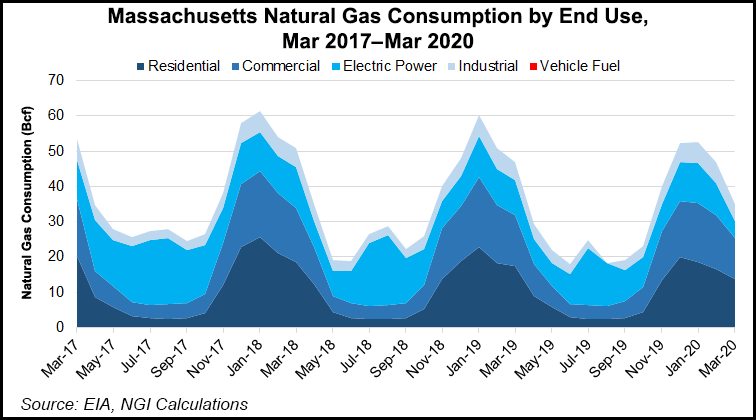 Should the legally binding statewide limit of net-zero greenhouse gas emission by 2050 be achieved, the AG acknowledged considerable fossil fuel usage reductions may be necessary. With the significant reductions in fossil fuels, gas distribution companies in the state would need to take steps to change planning processes and business models. Likewise, the DPU would need to develop policies and structures.

The petition from Healey urged the DPU to work with stakeholders to develop a regulatory and policy roadmap to protect customers.

The DPU petition comes two years after a series of gas explosions in the Merrimack Valley, served by NiSource Inc. subsidiary Columbia Gas of Massachusetts (CMA), killed one person and injured 25 others. Eversource Energy has agreed to acquire the NiSource utility in a $1.1 billion deal expected to close in 3Q2020.

In response to the potential for a gas phase out, an Eversource spokesperson told NGI, that “the potential natural gas ban does not impact our purchase of Columbia Gas, rather it presents more of an opportunity for us to help the state achieve its clean energy goals.

“As a catalyst for clean energy, we were the first gas company in Massachusetts to put together a proposal that included renewable natural gas, geothermal projects and demand-side management, all of which will help reduce carbon emissions. The acquisition of Columbia Gas’s assets allows us to expand those clean energy programs. We fully embrace working with the commonwealth to meet its 2050 climate goals and strongly believe those goals align with ours to be carbon neutral by 2030.”

The AG’s Office suggested that the DPU conduct an investigation in two phases. The first phase could require gas companies to submit business plans and economic analyses to help to project the state’s future gas demand in an economy restrained from carbon. The first phase would include records of probable revenues, expenses, investments, and also allow input from stakeholders on potential regulatory, policy, and legislative alterations.

Phase two would center around how the state could work to develop and execute any necessary changes that would be able to protect the state’s gas consumers.

Should the state’s DPU open the investigation, Massachusetts would become the third state to launch a formal process to phase out natural gas. In 2019, the California Energy Commission approved new local building requirements against gas in five cities and one county across the state. Last July, Berkeley became the first city to establish a ban on gas in any new construction projects, which resulted in California’s Menlo Park, West Hollywood, San Jose, San Mateo, Santa Monica and Marin County to follow along.