Prices, not protesters, were blamed for low turnout by industry Wednesday at the Bureau of Ocean Energy Management’s two Gulf of Mexico oil and natural gas lease sales. 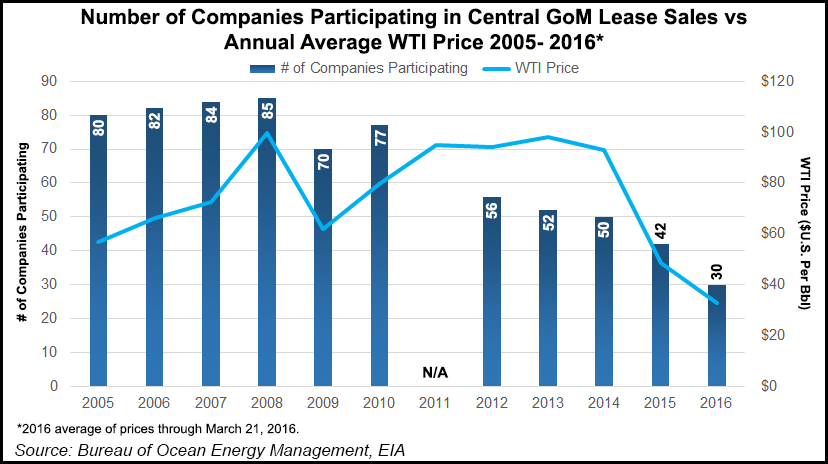 The Department of Interior agency said only 30 exploration and production (E&P) companies bid in Central Planning Area (CPA) Lease Sale 241, with 148 offers on 128 blocks. No bids were submitted in Lease Sale 226 for the Eastern Planning Area.

“The Gulf of Mexico will remain a cornerstone of the nation’s energy future for many decades to come” said Interior’s Janice Schneider, Assistant secretary for Land and Minerals Management. Schneider shared a microphone to discuss the sale with BOEM’s Mike Celata regional director for the GOM.

“Investment is down, but the Gulf of Mexico is still one of the most active deepwater areas,” Schneider said. “Investment is continuing in developing projects, and work continues from work begun years earlier. We expect exploration will bounce back when the market eventually does…”

The Eastern GOM sale, only the second ever, once again failed to attract any bidders (see Daily GPI, March 19, 2014). A lot of the area offshore Florida is under a moratorium. However, “it is still considered an important part of the Gulf of Mexico strategy,” Schneider said. Producers “may have future opportunities in the Eastern Planning Area not under moratorium; it’s supposed to be included in the 2017-2022 five-year sales plan.”

The dual sales were the ninth and 10th offshore auctions under the Obama administration’s five-year Outer Continental Shelf Oil and Gas Leasing Program for 2012-2017.

Mississippi Canyon Block 434 drew the highest single bid at $13.687 million, which was submitted jointly by Chevron U.S.A. inc. and a unit of Royal Dutch Shell plc.

There were 150 to 200 protesters who arrived outside the New Orleans SuperDome, where the auction was held. Some made their way into the staging area and attempted to disrupt the process by shouting Celata down as he read the bids.

Protesters inched toward the stage, but he said he was never worried as law enforcement officials protected the stage. “To me, I just read the bids as I normally would and proceeded through the process,” he said. “I was focused on reading the bids…and meeting the missions of the agency.”

While some protesters claimed on social media they had successfully delayed the auction, Schneider said that was never the case.

“Actually in the room, they were not successful in holding up the process,” she said. “We started relatively on time and we had good communication…all through the protest. Making sure everyone was safe was our No. 1 priority…We worked through reading all of the bids in regular order and were able to successfully complete the sale.”

Of more concern is the state of the industry, said Schneider.

“We are watching market conditions very, very closely,” she said. And with commodity prices low, the CPA sale “came in where we expected.”

The latest sale was the fourth lowest offshore auction overall for Interior since 1983, but it was not the lowest CPA sale ever, Celata noted. CPA Lease Sale 104 held in 1987 offered 114 tracks and secured 129 bids.

Based on continuing bidding activity by the same big-name producers, “to me, the sale reflects continued interest,” Celata said. Even with poor market conditions today, “the deepwater trends are still of interest to operators. The Gulf of Mexico is a premier basin where operators can be involved…It bodes well for the future of the Gulf.”

The industry is “proceeding cautiously,” Schneider said. “The price of oil and gas is certainly influencing a lot of companies that are slowing down on capital investments.” A low turnout, she said, is “a normal reaction to market conditions. When prices come up, we expect interest to come up as well.”

The first eight auctions in the five-year program for 2012-2017 offered more than 60 million acres for development and garnered more than $3 billion in bid revenues.

The Eastern Sale 226, which drew no bids, had offered 162 whole or partial unleased blocks covering 595,475 acres south of eastern Alabama and western Florida. Most of the Eastern area may not be offered for lease until 2022 as part of the Gulf of Mexico Energy Security Act of 2006.

He said it was “easy to contrast” the professionals working in the offshore “against the disruptive demonstrators at the Superdome…If these protesters have the opportunity to visit more of the Gulf of Mexico, they will see just how important oil and natural gas is to the residents of the Gulf Coast.

“These are people that love to fish and recreate offshore; no one is more concerned with the environment, and they will do all they can to see that the oil and natural gas off their coast is developed safely. The Gulf of Mexico is the source of 20% of our domestic oil and natural gas supply, and this is energy for all of us. While it is everyone’s right to protest, many of the demonstrators could not have been here in New Orleans…without the oil and natural gas produced as a result of the very sales they oppose; it is difficult to overlook the irony.”

Even though bids were off, “the companies that stepped up and submitted bids demonstrated their commitment to staying in U.S. waters and producing home grown energy, despite a tough operating environment,” Luthi said.

“The success of oil and natural gas production in the Gulf of Mexico is the result of decisions made a decade or more ago,” he said. However, “efforts to restrict offshore development will have far reaching consequences that will echo long beyond this administration,” referring to the decision by the Obama administration earlier this month to remove, following extensive public comments, any potential Atlantic Ocean lease sales in the next five-year plan (see Daily GPI, March 15).

“I find it peculiar that the same federal department that will collect, distribute and even spend the bonus bids submitted by industry…took a proposed Atlantic lease sale off the table just last week,” Luthi said. “That short-sighted decision forfeits tremendous future economic benefits, risks our nation’s recently earned status as the global energy leader and keeps nearly 87% of the U.S. outer continental shelf off limits to exploration, as it has been for decades.

“No other country along the Atlantic basin has so cavalierly closed off such large offshore areas. Canada, Cuba, Mexico, Greenland, Brazil and Ghana have all recognized the economic and energy security potential off their Atlantic coasts and have active offshore exploration programs. The U.S. should do the same…”

While noting that “nontraditional energy sources” such as wind, waves and ocean currents should be part of the energy portfolio, “many renewable energy technologies are years away from providing any tangible or affordable benefit for consumers,” Luthi said. “Even as renewable energy technologies mature, keeping oil and natural gas in the mix brings a diversity in energy sources that provides reliability and stability in both the price and supply of energy.”