A cold weather system that bolstered demand in portions of the United States this week combined with an unusually large storage withdrawal to send April natural gas futures and forwards markets up 9 cents on average between March 17 and 23, according to NGI’s Forward Look. 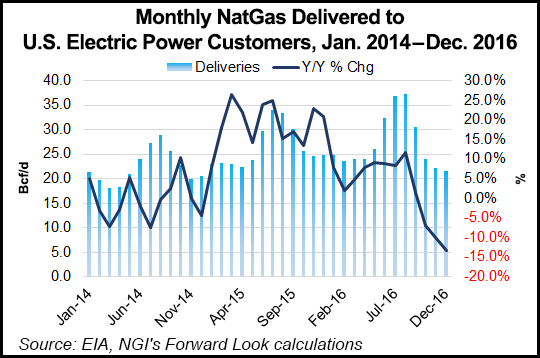 Nymex futures set the tone for the week, strengthening on all but one of the last five trading days as a late-season weather system dropped overnight temperatures to the 20s to near 0 degrees Fahrenheit this week from the Great Lakes to the Northeast. Milder conditions were forecast to be in place by Friday, with highs reaching more seasonable levels in the 60s and 70s, according to NatGasWeather.

“By this weekend, almost the entire country will be mild to warm, with only the upper Midwest and New England relatively cool with highs of only 40s. Essentially, much lighter-than-normal demand will now set up and last through early next week,” the forecaster said Friday.

The past week’s cold blast was one of several that have provided natural gas markets a lifeline in what has otherwise proven to be a non-existent winter season. In fact, March residential/commercial demand is up about 7.3 Bcf/d year over year and higher than February demand for the first time on record, according to investment bank Jefferies.

Over the last five years, res/comm demand in March has averaged around 32.7 Bcf/d, roughly 13.8 Bcf/d less than February demand. This year, res/comm demand is virtually flat in March — at 35.7 Bcf/d vs. 35.5 Bcf/d for February — with the colder-than-average March increasing res/comm demand by 7.3 Bcf/d year over year, New York-based Jefferies said. Total U.S. gas demand for March, which is sitting at around 87.9 Bcf/d so far this month, is now ahead of February demand (86.1 Bcf/d) for the first time on record, it added.

And although the cold snap this past week was short-lived, it prompted additional buying interest during what could be winter’s last significant heating degree day accumulation event, Mobius Risk Group said. “Bullish and bearish arguments both have validity at present, and next week’s cash pricing will likely be the truest indication of whether or not April futures can hold above the $3.00 mark through expiry,” the Houston-based energy advisory company said earlier this week.

Bulls continue to keep a watchful eye on production levels, which hovered around 70 Bcf/d Friday. The slow rebound in Lower 48 production appears to have supported prices for the summer and upcoming winter strip. Nymex summer 2017 prices were 13 cents higher between March 17 and 23 at $3.24, while winter 2017-2018 prices climbed 11 cents to $3.44.

The soft production could also be key to maintaining support for April futures before the prompt-month contract expires on Wednesday (March 29). “Despite weather, the market remains tight enough for $3.10 to be tested again, and a move higher to $3.30 remains possible with these limited production levels,” weather forecaster Bespoke Weather Services said late Thursday.

Nymex April futures briefly dropped to near $3 this morning, but rebounded throughout the session to finish the day at $3.076, up 2.5 cents from Thursday’s finish.

Meanwhile, a stout 150 Bcf draw from storage inventories for the week ending March 17 provided another shot of adrenaline to the market. While the draw was generally in line with market expectations, it was, however, the largest draw ever reported by the U.S. Energy Information Administration for the third week of March and compares to 53 Bcf last week, a build of 15 Bcf last year and a three-year average of 26 Bcf draw, Mobius Risk Group said.

And as NatGasWeather has said in recent weeks, March and April often see price gains on seasonal buying regardless of bearish weather patterns, and that could have aided price gains this week. But NGI’s Patrick Rau, director of strategy and research, said the chances of April settling above $3 “are more likely it won’t than it will.”

“The April contract is awfully overbought right now, with a slow stochastics reading above 80, which is well into overbought territory. Obviously, futures and cash will have to converge next Wednesday, and cash is drifting lower versus the prompt month,” Rau said.

“Given the overbought status of the prompt month futures, and the end of winter/warmer weather in the cash market, I think the chances are much greater that April futures fall to meet current Henry Hub prices, rather than cash rising to meet futures,” Rau said.

As for how prices trend in the coming weeks, Rau said the gas market will need to see more power burn to keep prices from winding up in the gutter. Year-over-year percentage changes were up 1.4% in September but were negative from October through December, he said.

“If that keeps up, that wouldn’t be good. We’ll probably need to see more of the increase like the market saw during the summer of 2015, especially with natural gas having more of a 2H17growth slant to it. Gas production likely falls for all of 2017 versus 2016, but I expect 2H17production to be higher than 2H16, so that gas will start competing with storage later in the year,” Rau said.

In the near term, a couple of cold weather systems will work to bring brief periods of higher demand, but the most recent weather data showed milder trends with only limited amounts of subfreezing air, NatGasWeather said.

“Therefore, the expectation should be for the weather data to maintain a seasonal to mild U.S. pattern for early April over the weekend break to provide at least some bearish weather headwinds,” the forecaster said.

Meanwhile, monthly indicators are showing higher confidence in El NiÃ±o development by the summer, which introduces a bit of bearish risk depending on how quickly it develops, Bespoke Weather Services said.

“This has seemed to limit upside in natural gas prices, as even with the tight current supply-demand balance, we note that weather-driven demand will be limited through much of March,” the weather forecaster said.

Monthly indicators have gradually shown slightly more bearish risk for the summer as the forming El NiÃ±o could keep some trough risk across the middle of the country if it develops strong enough. But even though previous expectations have been quite bullish, Bespoke said it still expects that a warmer-than-average summer could easily yield prices at the $4 level.

More climate models are showing consensus growing on at least a 30-40% chance El NiÃ±o is of moderate strength that opens a decent amount of bearish risk to the summer forecast. The result is May forecasts that appear to be quite warm with continued ridging across the East, but a chance that June forecasts trend a bit colder if the El NiÃ±o comes on a bit quicker. Forecasts for July similarly are a bit cooler as well, Bespoke said.

“Essentially, the later in the summer the timeframe is, the increased the bearish risk from the forming El NiÃ±o as it will increase the risk for bearish influences on the pattern. The result is that by August and September, we are likely to see significant El NiÃ±o risk, but we note that climate model output across the country is not yet picking up on it,” Bespoke said.

Taking a closer look at the markets, there were few outliers this week as most natural gas pricing locations followed the Nymex higher for the week. One region that saw much softer increases was just across the border in western Canada.

The softer increases at AECO come as forecaster Weather.com shows temperatures in Alberta have risen to the low 50s, tempering demand in the region. But upcoming maintenance on Alberta’s oilsands upgraders in April and May also appear to be pressuring gas prices as up to 230 MMcf/d of gas demand in the province could be cut, according to data and analytics company Genscape Inc.

Genscape’s latest Canadian Crude Oil Production Forecast Report is forecasting crude production will drop by as much as 260,000 b/d in April and May. Turnarounds at Suncor, Syncrude and Shell’s Scotford upgraders will reduce output in April and May by a total of 150,000 b/d. These turnarounds alone would account for a drop in gas demand of approximately 113 MMcf/d, the company said.

In addition, Nexen’s Opti Upgrader remains shut-in indefinitely after operations were halted last July. In the field, Genscape is forecasting a 105,000 b/d drop for turnarounds at in-situ operations. These will account for another roughly 115 MMcf/d of gas demand.