The need for more takeaway capacity out of the Marcellus and Utica shales has become a common refrain, but with a long list of projects on tap the Northeast could be headed for a pipeline overbuild, according to RBN Energy LLC President Rusty Braziel. 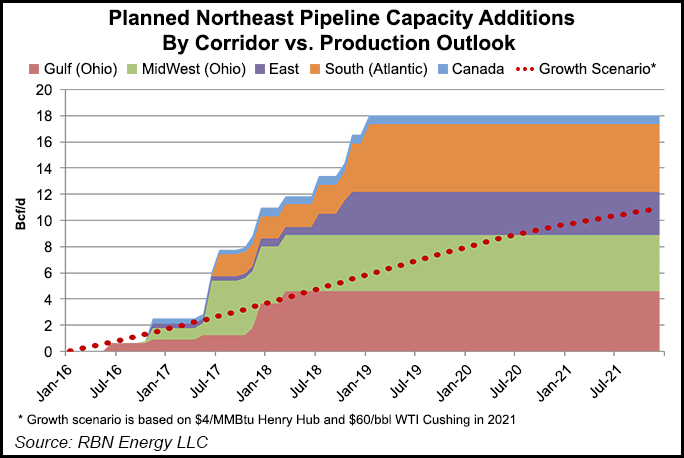 Speaking to attendees at the 21st Annual LDC Gas Forums Northeast conference in Boston Tuesday, Braziel said an evaluation of price and production scenarios through 2021 suggests the industry is planning too many pipelines to relieve the region’s current capacity constraints.

“Is it possible that we could build too much takeaway capacity out of the” Marcellus and Utica? “It’s certainly happened in about every other segment of the energy business over the last few years,” Braziel said.

Braziel said his firm estimated Northeast production through 2021 by taking a range of price scenarios and determining what producers would be likely to drill and how many drilled but uncompleted (DUC) wells they would put into service.

RBN’s most aggressive growth scenario, based on 2021 prices of $4/MMBtu Henry Hub and $60/bbl West Texas Intermediate, would see the Marcellus and Utica increase production by 11 Bcf/d over the next five years.

“Could prices be higher, and could [the growth scenario] be higher because prices are higher? Yes, it could. Could pipes be delayed? Absolutely,” Braziel said. Ultimately the discrepancy between the growth projections and planned capacity “means that there are a lot of things that could go right or wrong depending on your perspective on all of this…If you’re looking at this from the standpoint of a company committing or considering commitments to any pipelines, firm pipeline capacity, 20-year deals, you just might want to think long and hard about whether [an overbuild] could happen.”

Braziel drew parallels between the current state of shale hydrocarbon commodities markets and the housing market crash during the Great Recession.

“What we’re really seeing is the tail end of a bubble, and what’s actually happened is that bubble attracted billions of dollars worth of infrastructure investment that now has to be worked off,” he said. “It’s entirely possible that that could be the world that we’re into now, that it’s this world of infrastructure investment that we’re dealing with right now and that this has a lot to do with what we’re seeing happening up in the Northeast.”

Basis differentials at Appalachian Basin trading points still point to a need for more pipelines, Braziel said. It may come down to which projects pull from the remaining active areas within the basin, he said.

Of the 15 counties responsible “for the vast majority” of drilling activity in Pennsylvania, Ohio and West Virginia, “there’s only been nine of those counties that have anything going on today…It’s a very concentrated market with not much drilling going on. Of course, there are the DUCs. So there are certainly DUCs coming back, but the majority of the DUCs, guess what? The good DUCs are coming back in those very same counties…There’s a lot of other DUCs that are scattered about in those other counties that were drilled quite some time ago. They’re probably not coming back. The economics are not so good. We like to call them the dead DUCs.”