Canadian natural gas production is capable of growing by 25% as of 2035, and the country’s oil output could soar by 75% over the next quarter-century, but “major uncertainties” cloud the outlook, according to Canada’s National Energy Board (NEB). 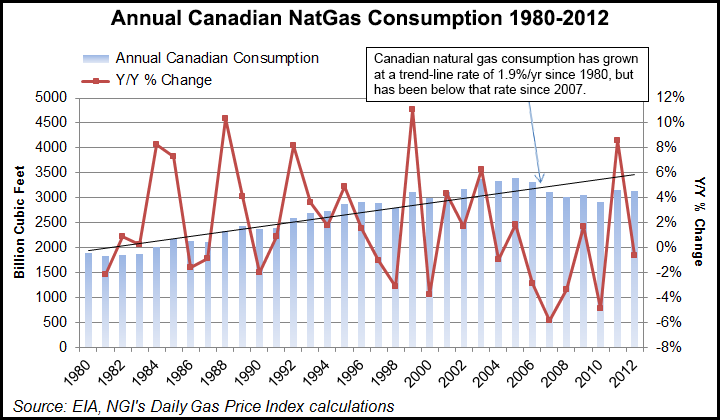 A new edition of the agency’s periodic long-term supply and demand forecasts, released Thursday, upholds the spirit of pro-development federal and provincial governments’ official articles of faith in Canada’s potential to be a “global energy superpower.” But in practice, the 101-page report describes the fondest growth hopes as rife with assumptions.

In the midst of reviewing 10 applications for 20- to 25-year export licenses for liquefied natural gas (LNG) — including eight terminal proposals for the Pacific Coast of British Columbia — the NEB makes no guesses about which projects will be built or even if any will succeed.

The lineup — called “the race to Asia” in BC, where political support for LNG exports was a cornerstone of the Liberal provincial government’s successful re-election platform last spring — shows potential to launch overseas shipments in 2019 at a beginner pace of 1 Bcf/d, says the NEB.

In the board’s “reference case,” or the projections rated as the most likely outcome in light of current expectations for oil and gas markets, tanker loadings double to 2 Bcf/d as of 2021 and increase to 3 Bcf/d by 2035. The reference case foresees annual average prices steadily rising to C$110/bbl for oil and C$6.20/MMBtu for gas.

But the NEB adds that its rating of the potential of the proposed traffic is not a prediction. “It is important to note that this is an assumption as opposed to a view on eventual LNG export volumes,” says the report.

“This assumption allows for analysis of other key outcomes, such as gas production, energy demand and macroeconomic projections. This volume is not associated with any particular Canadian project.”

The energy futures report, prepared after consultations with the industry and other forecasting agencies, emphasizes that the LNG agenda is a work in progress that remains in early, sketchy stages.

“The eventual volume of LNG exports may be higher or lower than assumed in this analysis,” the NEB says.

“Key uncertainties include North American natural gas prices, competition from other LNG supply basins, the pace of LNG demand growth, and the ability of Canadian LNG proponents to secure contracts with buyers. These, and other market factors, will determine the eventual volumes of LNG exports from Canada.”

If the uncertainties clear up and the assumptions come true, the NEB says Canadian gas production will make a start in 2019 on reversing its decline to an average 13.7 Bcf/d this year from 16.9 Bcf/d in 2006, and even farther down to hit a bottom of 11.2 Bcf/d in 2018. By 2035, the board says output has potential to do better than recover by rising to 17.4 Bcf/d.

The outlook for Canadian gas depends heavily on the future of the Alberta oilsands as well as BC hopes for LNG.

The current lineup of known projects in the northern bitumen belt suggests that production has potential to soar to 8.3 million b/d by 2035 if all the schemes succeed, the NEB says.

The reference case oilsands projection foresees a less but still strong 2.6-fold increase to 5 million b/d as of 2035.

Oilsands development is a critical element in the Canadian gas outlook. The northern Alberta industry is the prime driver of demand because in-situ, or thermal, underground extraction with steam injections into the ore — the fastest-growing bitumen production method — burns gas at an average rate of 1 MMBtu per barrel, while open-pit mining uses 0.5 MMBtu per barrel. The NEB’s reference case foresees bitumen belt gas consumption more than doubling to 3.4 Bcf/d as of 2035.

Although the oilsands outlook is firmer than the foggy outlook for LNG, the bitumen forecast also relies heavily on assumptions, the NEB adds. The notable articles of faith include confidence that all “infrastructure” required to expand export markets will be built, such as the hotly contested Keystone XL pipeline project in the U.S. and fiercely protested plans for conduits to BC tanker ports.

Unless the schemes to spread beyond the United States and onto the world energy scene for the first time in the Canadian industry’s history succeed, exporters are headed into a trap of competing for a shrinking U.S. market, the NEB says.

The board acknowledges forecasts by Washington’s Energy Information Administration that U.S. oil imports will continue declining from 8.5 million b/d in 2012 to 6.8 million b/d in 2021. The NEB also observes that U.S. production remains in early stages of growth that was unexpected until recently and remains difficult to predict, thanks to the spreading technology of horizontal drilling and hydraulic fracturing.

“Given the early stage of tight oil development future production and trade outcomes in the U.S. are uncertain at this time,” the NEB says. “Currently, Canada’s crude oil exports go entirely to the U.S., so rising U.S. domestic supply could pose some risk to the growth of Canada’s traditional market.”

Development of the Marcellus Shale formation in the eastern United States has proved that truly dramatic change is possible, the NEB says. The board’s records show that Canadian gas exports to the northeastern states via Ontario and Quebec pipeline exit points plunged by 60% from an average 2.3 Bcf/d in 2006 to 0.9 Bcf/d in 2012. Imports of U.S. gas into Ontario and Quebec shot up over the same period, soaring 2.6-fold to 2.3 Bcf/d from 0.9 Bcf/d.

Canadian natural gas consumption has grown at a trend-line rate of 1.9% per year since 1980, but it has been below that rate since 2007, according to U.S. Energy Information Administration data. Consumption was 3.145 Tcf in 2012.