The Supreme Judicial Court of Massachusetts on Wednesday dealt a setback to the proposed Access Northeast pipeline project when it overturned a gas-electric harmonization plan approved by the state’s Department of Public Utilities (DPU). 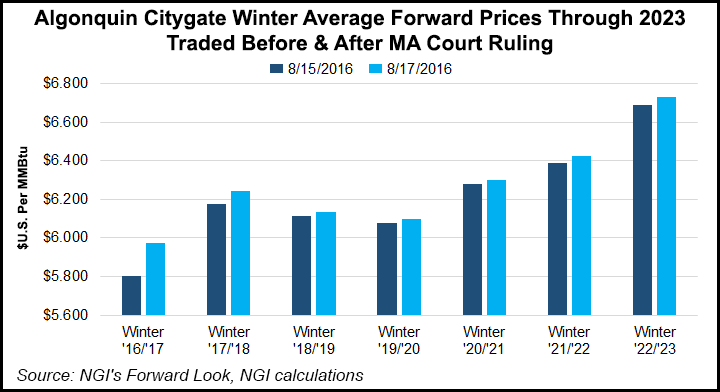 The DPU, in response to a petition last year from the state’s Department of Energy Resources, approved a plan to allow electric distribution companies (EDC) in the state to enter into long-term capacity contracts on natural gas pipelines and recover the costs through rates. The EDCs would then release their contracted capacity to electric generators or back into the market.

The plan came in response to recent commodity price volatility in New England during the capacity-constrained winter months and was designed to work around the problem of electric generators being unwilling to sign up for the long-term capacity contracts needed to stimulate pipeline construction.

The court concluded that, while Massachusetts state law tasks the DPU with regulating contracts for both natural gas companies and electric companies, respectively, the department ultimately “erred in interpreting” the relevant code “as authorizing it to review and approve ratepayer-backed, long-term contracts by electric distribution companies for natural gas capacity.”

The plaintiffs challenging the capacity release plan in Massachusetts were Engie Gas & LNG LLC and the Conservation Law Foundation.

National Grid spokeswoman Danielle Williamson told NGI that the court’s ruling “is a disappointing setback for the project, which is designed to help secure New England’s clean energy future, ensure the reliability of the electricity system, and most importantly, save customers more than $1 billion annually on their electricity bills. We will explore our options for a potential path forward with Access Northeast and pursue a balanced portfolio of solutions to provide the clean, reliable, and secure energy our customers deserve.”

Matt Hoza of BTU Analytics LLC said the state supreme court’s decision is “definitely a blow for Access Northeast.” Hoza said he’s waiting “to see if Spectra has any legal recourse or if there is a loophole that they might be able to exploit” before making any final assessment on the project’s future.

“There are some smaller AGT projects this year and next, but really Access Northeast was the big project into New England that was going to provide some basis relief,” he said. “If it does go down, expect basis to be just as volatile as it has been in the past and LNG imports to remain an important fuel source during winters.”

NGI’s markets analyst Nate Harrison said the timing of the ruling, coming before Thursday’s storage report, “allows us to better visualize the possible price impact on Algonquin winter strips in isolation from other major market news.”

The Spectra-operated AGT filed with FERC in February seeking approval of a tariff revision needed to move forward with Access Northeast’s proposed EDC capacity commitments, setting off a debate that has drawn numerous filings from stakeholders on both sides (see Daily GPI, June 29).

The revision would allow Algonquin to bypass the Federal Energy Regulatory Commission’s capacity release requirements in order for EDCs owning firm transportation contracts to give up their capacity to generators as part of a state-regulated electric reliability program. Opponents of the proposal have described it as anti-competitive and said it would artificially suppress the value of the capacity, while backers have said it would improve reliability and save ratepayers money by avoiding price spikes.