Permian Basin natural gas processor Lucid Energy Group has been given the green light to advance a carbon sequestration project at its Red Hills Complex in Lea County, NM. 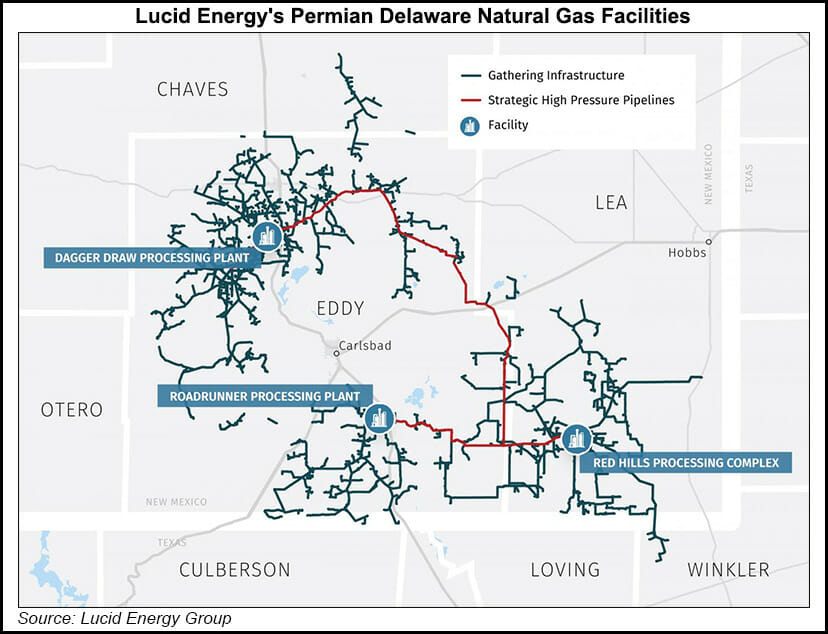 Once it gains approval from the Internal Revenue Service to use CO2 sequestration tax credits under Section 45Q, the Dallas-based firm said the carbon capture and sequestration (CCS) project would permanently store emissions in existing and permitted disposal wells.

“Since our entry to the Delaware Basin five years ago, Lucid has targeted investments in large-scale gas treating assets, which empower our customers to develop highly economic drilling locations” with associated gas, CEO Mike Latchem said. The company is “the perfect candidate” to develop the project in the Permian “by simply modifying and expanding our existing operations.”

The CCS plan “is scalable and provides growth capacity, enabling Lucid to offer a lower-carbon-intensity service to its customers and reduced carbon footprint to its stakeholders,” management noted.

Lucid, considered one of the largest private midstream operators in the Permian, has 2,000-plus miles of pipeline in operation,150,000 hp compression and 1.2 Bcf of gas processing capacity in operation or under construction.

Under the MRV plan, the CO2 would be removed when gas is processed and treated at Red HIlls for customers’ gas streams. Lucid provides midstream services to more than 50 customers in New Mexico and West Texas, including ExxonMobil and Marathon Oil Corp.

The Red Hills complex is the largest, with five plants and combined capacity of 920 MMcf/d. The Roadrunner plant in the Permian provides 220 MMcf/d capacity, with the Artesia facility offering 40 MMcf/d. Lucid also has 60 MMcf/d of sour gas treatment capacity in the Permian, along with a water gathering system that has 150,000 barrels/day of capacity.

Various CCS endeavors are underway in the United States.

Occidental Petroleum Corp., one of the Permian’s largest oil and gas producers, is advancing a different kind of carbon sequestration project. A decision on whether to move forward on its massive direct air capture (DAC) project is expected this year. If it is sanctioned, the DAC facility could be in operation by 2024, capturing up to 1 million metric tons/year of emissions from the air.

Other carbon capture projects also are on the drawing board, both by private companies and some backed by federal funds. For example, nine research projects were awarded federal funding to advance DAC technology.

In addition, Chevron Corp. is working with Enterprise Products Partners LP on potential carbon storage projects for their U.S. operations in the Midcontinent and on the Gulf Coast.