Oil and natural gas exploration and development (E&D) is predicted to decline in line with lower crude prices, which in turn would ding the value of proved reserves, the Energy Information Administration (EIA) said Thursday. 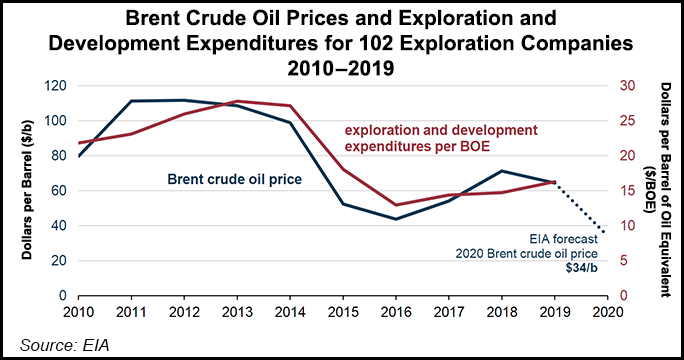 Financial reports analyzed by the federal agency regarding global spending found E&D climbed in 2019 from 2018 by 13% to $361 million for 102 publicly traded operators.

EIA based its analysis and its recently published 2019 Financial Review primarily on the reports of the publicly traded operators, but the conclusions may not represent the sector as a whole as private operators are not required to issue financial reports.

According to the financial reports reviewed, however, the 102 companies produced 22.2 billion boe.

“Dividing these companies’ E&D expenditures by their combined production volumes provides a ratio of $16/boe in 2019, or about one-quarter of the average Brent crude oil price of $64/bbl,” according to EIA.

In EIA’s Short-Term Energy Outlook issued in May, Brent crude was forecast to average $34/bbl in 2020. If the crude price forecast is on the money, EIA said E&D expenditures per boe could decline to under $10/boe this year if E&D spend remains at around 25% of the Brent price.

Because crude prices directly affect the profitability of E&D projects, “changes in the prices companies use to develop their calculation of reserves can significantly affect their proved reserves levels and the volume of reserves they can claim as additions,” researchers noted.

The U.S. Securities and Exchange Commission (SEC) requires publicly listed operators to value proved reserves at the end of every year using the average crude price from the first trading day of each month during the year.

Operators routinely take one-time impairment charges for a quarter or a year for oil and gas assets that decline in value to less than the cost of developing them, based on the SEC requirements. Impairments represent the decrease in value of the assets a company owns, typically the proved reserves.