U.S. drilling permit activity slumped across the major Lower 48 basins in August, up sharply from a year ago but down from 2019 levels, according to Evercore ISI. 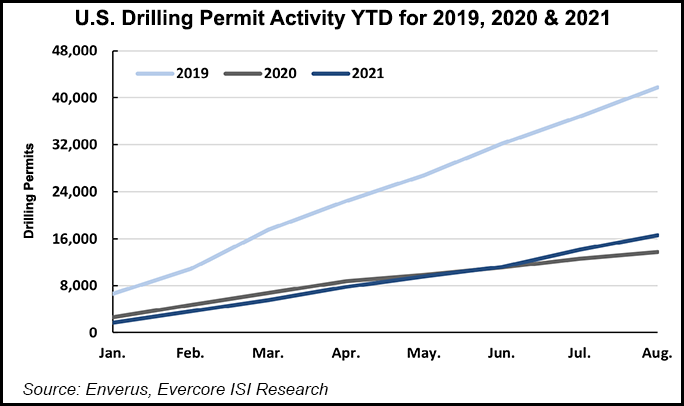 The declines in requests for permits in the biggest oil and gas production areas of the Lower 48 were offset slightly by moderate growth in some of the smaller basins, with permitting overall up 82% m/m, or by 80 permits. The Mississippian Lime, for example, had a 14% increase in permitting from July, with 20 more permit requests.

Compared with a year ago when the energy sector was pounded by slumping oil and gas demand, permitting overall in August climbed by 119% year/year. However, compared to the pre-pandemic days of August 2019, permitting last month was off by 51% and down 60% on a year-to-date (YTD) basis, the Evercore analysts noted.

The state permitting trends are signaling a turn, with Texas stumbling and California appearing to be stepping up, according to the Evercore data.

“U.S. states with the largest absolute permit counts experienced some of the sharpest declines in August,” the analysts said.

“Surprisingly, California experienced an offsetting surge in permits last month of 258% (up 134 m/m), its highest count since April, which was when Gov. Gavin Newsom set a 2024 ban for new drilling permits,” the analysts said.

“Compared to 2019 levels however, employees working in both areas are still lower by 18% and 3% on a YTD basis.”