Natural gas and oil production is predicted to increase in September month/month in the seven key producing regions of the Lower 48, according to the Energy Information Administration (EIA). 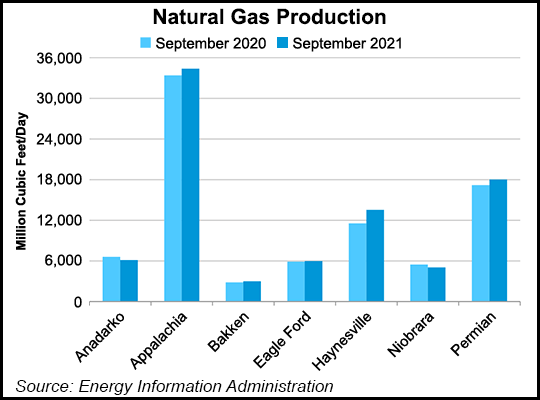 The Eagle Ford should see oil production down month/month by 5,000 b/d to around 1.05 million b/d in September. Gas output is forecast to decline by 6 MMcf/d month/month to average 5.97 MMcf/d.

In the Haynesville, the DPR data indicate  oil output will remain flat in September, averaging around 34,000 b/d. Gas production, though, is forecast to jump by 124 MMcf/d from August to average 13.54 MMcf/d in September.

The DPR data also show drilled but uncompleted wells, aka DUCs, falling overall by 258 in July from June. The DUC count at the end of July stood at 5,957 from 6,215 in June. Every region saw fewer DUCs by the end of July, with the Permian knocking off 130 to lead the pack.