The battle to become a top oil and natural gas producer is no longer being waged by Jett Rink-like roustabouts toiling in the sun off of caliche roads in West Texas, but rather by algorithm experts sitting in darkened, air-conditioned offices in Houston. 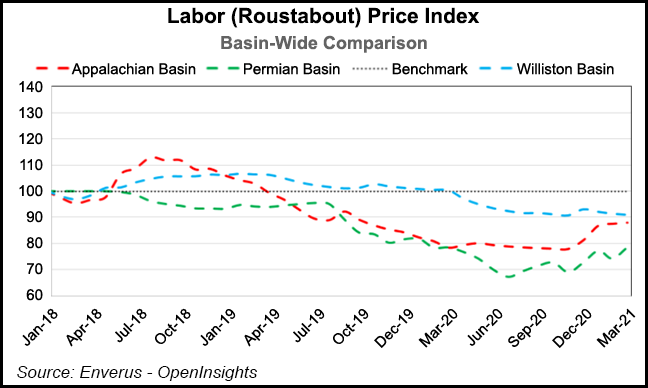 Exploration and production (E&P) companies looking for the edge to elevate their operations are less likely to be the wildcatters depicted by Edna Ferber in Giant. Instead, the experts are using digital wizardry.

Austin, TX-based Enverus controls a plethora of data gleaned from the seven major Lower 48 basins and Western Canada. The “traditional” E&P metrics visualize the permitting trends, rig counts and completions. With efficient, fiscally sustainable operations now the new mantra, the oil and gas data experts have found an opening to help customers get that edge.

Enverus expert Akash Sharma, who directs the Strategic Advisory Services & Market Insights for Enverus, recently discussed in an interview with NGI’s Shale Daily how E&Ps can reimagine their operations. The future of the oilfield is no longer about the deepest well or the highest initial production (IP) rates.

“This is something that we’ve heard over and over again,” Sharma said. “We’ve had the ‘Shale 3.0’ idea, the objective being to create fiscally responsible operations for E&P companies. It’s the idea of operating within your means, showing an organic return on investment and a net positive cash flow approach for it…

“The most exciting thing now is no longer, ‘oh, I drilled XX Bcf.’ It’s not the biggest IPs, the biggest wells. It’s more about being the most effective and efficient, and running the most optimized operations.”

There’s only so much information, though, that an E&P team can glean from their operations even via computer. What’s competitor XYZ Co. paying for drilling fluid? Why are proppant costs rising? How can labor costs be managed?

The Trend Is Your Friend

The digital equation used by Enverus begins with “the production of oil and gas on top,” Sharma said. “The denominator is the amount of money it took to produce that oil. What we want to look at is how to optimize that ration. We’ve always continued to focus on the numerator, i.e., production…But how do you minimize costs without compromising production?”

Market intelligence across the analytics platform covers 80-85% of North American oil and gas capital spending, with individual basin-level data for at least 75% of the overall total.

“If you are seeing a trend in 80% of the market, it’s safe to say that it’s more or less a similar trend in the entirety of the market,” Sharma said. “Given that we have leveraged an understanding of that majority market, and scan scale it up to estimate the entirety, it makes it easy for us to help our customers in getting that transparency” across the onshore basins.

Of the 400 or so indexes that are tracked, the drilling data today appears “relatively stable,” with costs up slightly. Proppant costs recently have shown signs of recovery, especially in the Permian. Whether it’s a return to early 2020 numbers — or a true resurgence —  is yet to be seen, Sharma said.

There’s also been a recovery in the costs of chemicals for completions. In addition, the data indicates sharply rising labor and wage costs, which also was recently noted by the Federal Reserve Bank of Kansas City.

“We never want to expose to Operator A what Operator B is paying for this product,” Sharma said. “This is transactional information. So, the core aspect of the product focuses on Operator A looking at their own information.”

While Operator A won’t see Operator B’s information, Enverus provides “normalized” indexes to show broad and individual market trends across the basins. Data is pulled for, among other things, costs for rigs, fluids, recycling, labor and proppant.

“It gives us a projection of how the overall market is doing,” Sharma said. The rising costs in the Permian Basin, for example, indicate “signs of a recovering industry and a recovering operations business.” It also signals that higher prices for supplies and labor may be inevitable.

What the data has allowed E&Ps and oilfield services (OFS) companies to do “is integrate supply chains,” Sharma said. “That standardization has helped with cost savings for sure.”

OFS operators are intrigued by the market intelligence as they may be able to respond to shortages or oversupply.

“They can see in the data if indeed a recovery is underway and react more quickly if certain items are needed in certain areas,” Sharma said. “If a market area is going up by several percentage points, it may be time to hike prices.”

And when the OFS company comes calling to raise prices, the data provides “justification behind those conversations…From what our customers have told us, both buyers and suppliers become more comfortable. They can say, ‘here is what the data is showing us, and this is why this is happening.’ I think it helps the overall industry be more streamlined.”

Some companies may have as many as 35,000 different suppliers, so the indexed data may speed up the overall process.

“Given that the industry was coming out of probably one of the worst times…there is a significant appetite for this,” Sharma said. The best feedback, though, is from customers now able to answer “very simple questions,” such as how much is being spent on chemicals. The answer is “two clicks away.”

It’s basically a more surgical approach. Instead of looking at overall costs, i.e. using “brute force to get costs optimized everywhere, we can maximize responses where it’s most likely you can get discounts.”

Spending for emissions technologies and flaring also is being categorized as companies look for the edge in environmental, social and governance initiatives.

Today the trend in costs is “very regional-dependent,” he said. “Even in 2020, we saw much bigger price dips and reductions in more oil-rich basins than gas-rich basins, which makes sense. Gas did not suffer the same price assault that oil did.”

In the gas-heavy Appalachian Basin and Haynesville-Bossier formations in Louisiana and Texas, some pricing retreated last year but not by much. Those getting hit by lower prices mostly were in the oilier basins like the Permian and Eagle Ford Shale.

And labor costs are moving higher.

“Again, a lot of people are coming back to work, and there is more demand than there are people willing to come back to work,” Sharma said.  “There were mass layoffs and now hiring is up with the pick up in prices…Other categories are more or less stable.”