Louisiana Gov. John Bel Edwards, who oversees some of the richest oil and natural gas resources in the Lower 48, on Wednesday set the Pelican State on a path toward net zero-carbon emissions by 2050, which the energy industry is backing. 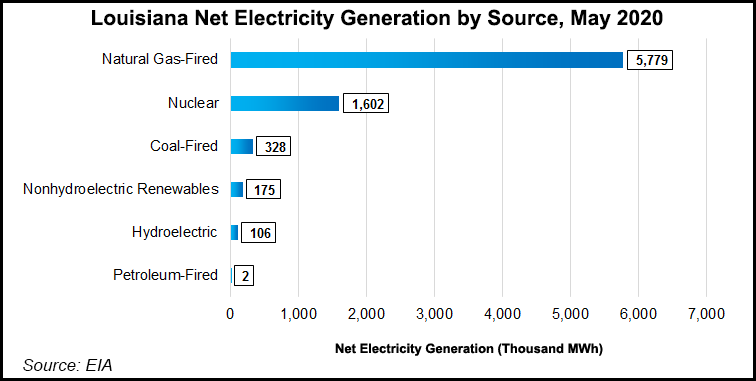 “By coupling these new efforts to build resilience and address greenhouse gas emissions with our world class coastal protection and restoration program, we believe we can even more successfully confront the difficulties in store in the future and seize new opportunities to transform ourselves into a more equitable, prosperous, and sustainable state,” said Edwards.

The Louisiana Mid-Continent Oil and Gas Association (LMOGA) is partnering with the governor’s task force to work on climate change solutions.

“Louisiana has long been a global leader in energy production, and this task force presents an opportunity to show the world that energy production and environmental stewardship go hand in hand,” said interim LMOGA President Lori Leblanc. “Through the efforts of this task force and the actions of LMOGA members, Louisiana can become a leader in climate change solutions.”

Looking ahead, coastal challenges are going to be exacerbated by climate change, the Democratic governor said.

Louisiana’s Environmental Quality Secretary Chuck Carr Brown said the state already has achieved attainment for most of the U.S. Environmental Protection Agency’s criteria air pollutants. “It’s now time for Louisiana to take the lead in addressing sea level rise and coastal subsidence through reductions in overall greenhouse gasses. Climate change can and will affect the state’s environment, economy, agriculture and livability. This task force will seek common sense solutions that we can all embrace.”

Louisiana plans to draw on lessons learned from other states and nations engaged in reducing emissions, but the state “faces unique challenges and opportunities,” Edwards noted.

Louisiana is the only state where industrial sector emissions make up more than half of a state’s total emissions. However, it also possesses the potential for carbon capture and underground storage by deploying technologies and restoring natural systems like wetlands.

“Louisiana has many industrial sources of carbon, which means a great potential demand for carbon management strategies, and also has deep, well-confined geologic storage options in close proximity to that industrial base, as well as some history of putting carbon to use in such operations as enhanced oil recovery,” said Louisiana Department of Natural Resources Secretary Thomas Harris. “These factors provide a unique opportunity for our state to be both a proving ground and a leader in applying strategies that can help lessen the climate impacts of carbon in the future.”

Secretaries from 16 different state government agencies have appointed representatives to coordinate on the initiatives. The task force is set to produce an update to the GHG emissions inventory by the end of the year. An interim report is set to be completed by February, with a final climate strategy document issued in February 2022.