Los Angeles (LA) Mayor Eric Garcetti hosted a rally on Tuesday to announce the start of a program to phase out the use of natural gas for power generation in Southern California.

The Los Angeles Department of Water and Power (LADWP) plans to begin by phasing out Scattergood, Haynes and Harbor gas-fired power plants along the Southern California coast that represent 38% of the city utility’s gas generation and collectively 1,662 MW.

The phase out is part of a decade-old effort to eliminate seawater-cooled electric generation plants in the state, ending the use of “once-through-cooling,” or OTC, facilities. The announcement is a major shift for LADWP and the city’s elected leaders, who a few years ago wanted to spend more than $3 billion to repower the three gas-fired plants. LADWP also has been an ally to keep open Southern California Gas Co.’s troubled Aliso Canyon underground gas storage field.

Garcetti said the phase out of the three facilities “is the beginning of the end of natural gas in Los Angeles,” insisting that the “climate crisis demands we move more quickly to end dependence on fossil fuel.”

Targeting 2029 for eliminating gas-fired generation in the city would accelerate the city’s transition to 100% renewable energy and puts it on track to meet a carbon-neutral target of 2050, he noted.

Board of Water and Power Commission President Mel Levine, a former congressman, said the utility accepted the mayor’s challenge and was “fully committed to continuing on the path to 100% clean energy for LA.” The plan would require LADWP to create “an even greener grid locally,” including energy storage facilities and upgrades to the transmission system.

While advocacy groups cheered the phase out, LADWP was criticized for continuing plans to transform the public-sector coal-fired Intermountain power plant in Utah to an 840 MW gas-fired plant. Intermountain provides 18% of LADWP’s power, while gas-fired generation accounts for about one-third of supplies and renewables account for almost 25%. 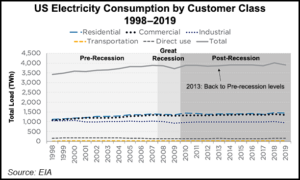 Shifts in electricity use imposed by the coronavirus pandemic could lead to long-term changes and lighter overall demand for years, according to a new report from Columbia University’s Center on Global Energy Policy. “Demand has declined, and usage patterns have been altered — changes that could remain even after the pandemic ends,” wrote researchers A.J.…