Socialist and former Mexico City mayor AndrÃ©s Manuel Lopez Obrador is slated to be Mexico’s next president after cruising to a landslide victory in Sunday’s general election. 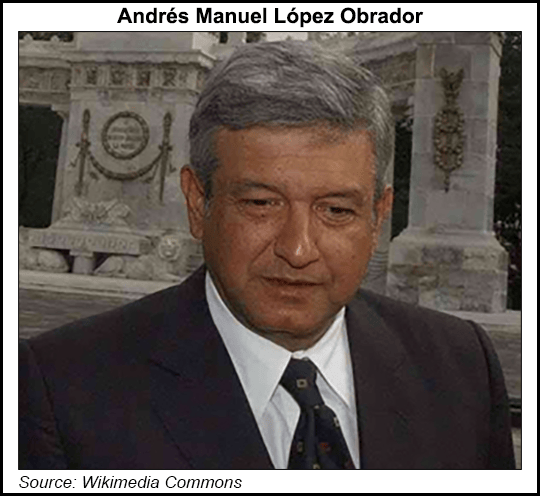 Although final tallies from congressional races are not expected until later this week, preliminary results available Monday made clear that Lopez Obrador’s National Regeneration Movement (Morena) party had wrested absolute majorities in both the Senate and the Chamber of Deputies from the ruling Institutional Revolutionary Party (PRI), which was left reeling.

Lopez Obrador, the 64-year-old founder and face of Morena who had run unsuccessfully for president on two prior occasions, capitalized this time on swelling discontent over rampant violence and political corruption in the country under the PRI and its deeply unpopular sitting president, Enrique PeÃ±a Nieto.

His presidential triumph is the first by a candidate of any party other than PRI or the center-right National Action Party (PAN) since a 1933 constitutional reform enacting six-year terms without the possibility of re-election for presidents. Lopez Obrador would also be the first president in the modern democratic era, considered to have begun in 2000, to have a majority in the Congress.

“Today an era ends, and we are going to begin another,” Lopez Obrador, popularly known by his initials AMLO, told a crowd of jubilant supporters Sunday in a victory speech. “We triumphed and now we are going to transform Mexico.”

Although Lopez Obrador’s victory was seen as a foregone conclusion in the weeks leading up to the election, Morena’s trouncing of PRI in the Congress exceeded the expectations of analysts, who for the most part had forecasted that a Lopez Obrador-friendly coalition would gain control of the lower House, but not the Senate.

Although Lopez Obrador’s public comments on the sweeping 2013-14 energy reform passed by Congress under PeÃ±a Nieto have been decidedly negative, he has dialed back the rhetoric in recent weeks.

The business-friendly reform has not always played well with the Mexican public at large, especially when liberalized gasoline prices have combined with high inflation to squeeze consumers at the pump.

However, Lopez Obrador cannot afford to lose revenue generated from the reform if he wants to carry out his ambitious social agenda, which includes doubling pensions for the elderly and guaranteeing “that all young people have the right to study and the right to work.”

Despite the president-elect’s unprecedented mandate following Sunday’s results, “in terms of the energy reform, we do expect him to be cautious,” Verisk Maplecroft’s Karla Schiaffino, Americas politics analyst, told NGI’s Mexico GPI.

“The states, especially [those] that are governed by parties that actually approved the reform, [are] not likely to support him in a drastic amendment of the energy reform,” she said. “And also what we have been seeing is that he has quite ambitious goals for oil production, for Pemex.” She added, “Pemex will not be able to go it alone.”

While a legislative reversal of the reform is seen as improbable, there are multiple ways in which the executive branch can unilaterally delay or tinker with its implementation, a fact not lost on the business community as it seeks to gauge the veracity of Lopez Obrador’s pledges to scrutinize oil and gas contracts awarded through the reform.

Lopez Obrador reiterated this commitment Sunday night, telling supporters that energy contracts “will be reviewed in order prevent acts of corruption or illegality. If we find anomalies that affect the national interest, we will turn to the Congress, to national and international courts, which is to say, we will always follow the legal route. We will not act in an arbitrary manner, nor will there be confiscation or expropriation of assets.”

Mexico’s new Congress will begin its term on Sept. 1, while Lopez Obrador would assume the presidency on Dec. 1. Contracts for the final two oil and gas bid rounds of PeÃ±a Nieto’s term, meanwhile, are scheduled to be awarded on Sept. 27. Pemex is also planning a farmout auction for seven onshore mature areas in southern Mexico on Oct. 31.

During the transition period, Lopez Obrador “will control appointments that play a defining role in energy policy,” Schiaffino wrote in a research note ahead of the election. “We do not expect new licensing rounds during the first half of 2019 as changes in the ministries of Energy and Finance allow AMLO to influence the implementation of the energy reform.”

President Trump tweeted on Sunday, “Congratulations to Andres Manuel Lopez Obrador on becoming the next President of Mexico. I look very much forward to working with him. There is much to be done that will benefit the United States and Mexico!”

Mexico’s ComisiÃ³n Nacional de Hidrocarburos (CNH) said it would cooperate with Lopez Obrador’s plan to review oil and gas contracts. “At the CNH we take pride and satisfaction in conducting ourselves with maximum transparency,” it said. “It is our priority to be accountable to all Mexicans, therefore we reiterate our total disposition to the announced process, with the trust in the work carried out by the CNH for the benefit of Mexico and in strict adherence to the legal framework that governs us.”

Wood Mackenzie analyst Ixchel Castro, manager of Latin America oils and refining markets, concurred, indicating Monday that “While much remains unknown, one thing is clear: to deliver on his campaign promises, LÃ³pez Obrador will need an energy sector that generates revenue during his six-year term. This administration stands to reap the rewards of the reforms — increased production, private investment and job creation — but this will require strong backing from both the incoming administration and government coalition support.”

The United Nations’ Alicia BÃ¡rcena, head of the Economic Commission for Latin America and the Caribbean, congratulated Mexico on “the deployment of democratic commitment,” and cited the concessions of Meade and Anaya as “a stimulating signal of democratic maturity in Mexico.”