With FERC steaming ahead with a potential approval later this month, Kinder Morgan’s proposed Sierrita Pipeline project for delivering natural gas to southwestern markets in the United States and high-growth power generation markets in northern Mexico appears to be stuck in local political mud in Pima County, AZ. 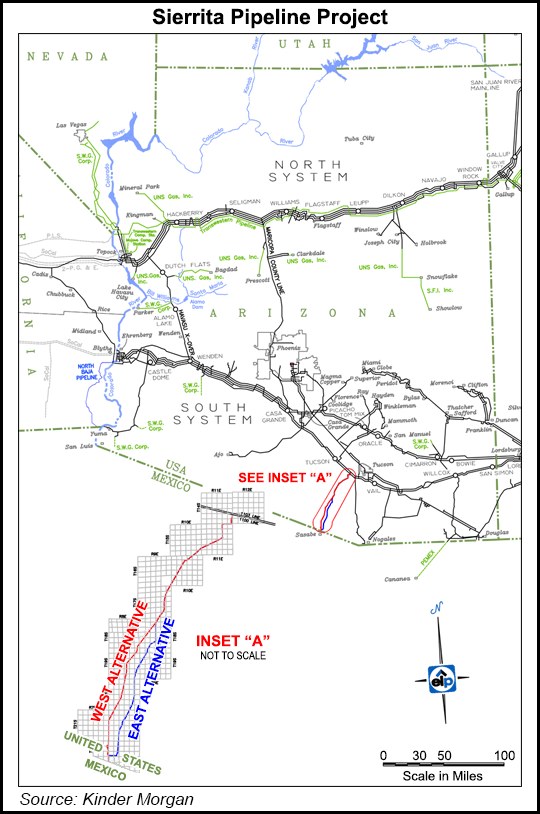 While federal authorities have issued a final environmental impact statement (EIS), including one proposed route on the west side of the county, Pima officials have strongly opposed it at every juncture of the process at the Federal Energy Regulatory Commission (FERC). The five-member board again on Tuesday considered a resolution going on record as opposing the Sierrita west route

The Pima County elected board for a third time delayed action on a resolution that already had been postponed twice since April. It reiterates for FERC the board’s opposition to the pipeline route included in the final EIS and asks that the county be able to recover all of its costs from Kinder Morgan, and that the pipeline company be required to establish a conservation fund to pay for what the officials called “long-term adverse impacts” from the pipeline.

County officials rescheduled the resolution for consideration on June 17, noting that they are still negotiating various mitigation demands with Kinder Morgan.

Last month, Pima County Administrator Chuck Huckleberry sought more than $16 million from Kinder Morgan for various costs, including environmental remediation and increased law enforcement, but the county so far seems to be the only bump in the road for the project.

Previously called the Sasabe Pipeline, the Sierrita project involves the construction of a 61-mile, 36-inch diameter lateral from El Paso Natural Gas Co.’s mainline east-to-west interstate system in Arizona to a point near the international border at Sasabe, AZ.

In 2012, shortly before the Sierrita application was made, Mexico’s state-owned electric utility Comision Federal de Electricidad (CFE) chose a unit of San Diego-based Sempra Energy to construct, own and operate a 500-mile, $1 billion pipeline network to deliver gas to power plants in the northwestern states of Sonora and Sinaloa (see Daily GPI, Oct. 29, 2012). It will interconnect with Sierrita at the international border.

Sempra Mexico was awarded two contracts by CFE after a competitive bidding process. The network is to be composed of two segments that would interconnect to the U.S. interstate pipeline system in Arizona and would provide gas to new and existing CFE power plants that currently use fuel oil. The capacity for each segment is fully contracted by CFE under two 25-year firm contracts denominated in U.S. dollars, according to Sempra.

The first segment, a 36-inch diameter, 310-mile pipeline, is the one slated to interconnect with Sierrita at Sasabe, and continue through northern Mexico to Guaymas, Sonora, with a capacity of 770 MMcf/d in Mexico. It is expected to begin operation late this year. The second segment from Guaymas to El Oro, Sinaloa, is to be a 30-inch diameter, 200-mile pipeline with capacity of 510 MMcf/d and a planned operations start in the third quarter of 2016.