Production of natural gas in Trinidad & Tobago (T&T) has been waning, as evidenced by liquefied natural gas (LNG) output curtailments by Atlantic LNG announced recently. Reserves are in decline, but there’s more gas to be had if terms are right for producers and/or a deal could be struck with neighboring Venezuela, an industry consultant told NGI. 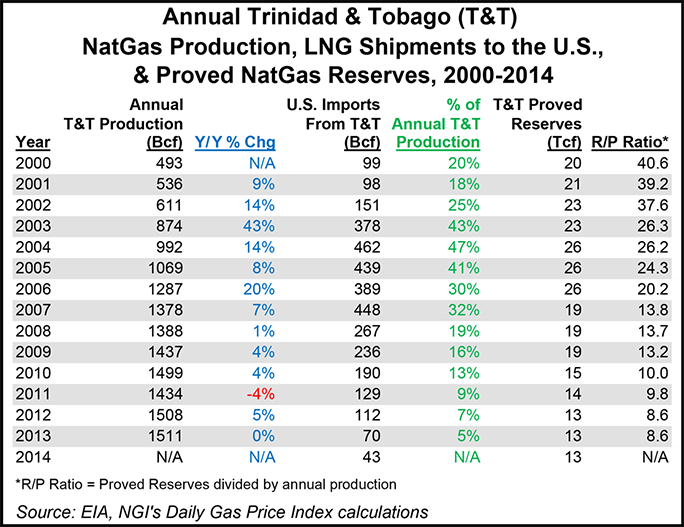 There is natural gas under the Gulf of Paria between Trinidad and Venezuela’s eastern coast. “All it takes to sort of ensure that Trinidad is an LNG and methanol producer for the long, long term is for those two countries to strike a deal,” the consultant said. “Those reserves are not being developed. They’re not earning revenue. They’re not exporting that natural gas, and so there would seem to be a convergence of interests there.”

It will come down to politics as to whether Venezuela and Trinidad produce the gas under Venezuelan waters and whether it winds up in Trinidad’s LNG and methanol production.

For the near term, though, T&T is experiencing the consequences of being a multi-decade natural gas producer: declining reserves. T&T’s proved reserves have been falling over the last 15 years. T&T’s proved gas reserves are at 13 Tcf, down from a peak of 26 Tcf in 2006, according to U.S. Energy Information Administration data. That leaves just 8.6 years left of production, given T&T’s 2013 production rate. Production has plateaued in the last four years, running between nearly 1.5 and 1.511 Tcf three of the last four years.

LNG exporter Atlantic LNG said recently it has curtailed production due to declines in natural gas available to feed its four-train liquefaction and export terminal in Point Fortin on the southwest coast of Trinidad.

“We receive frequent updates from our gas suppliers and use this information to adjust our production forecast and determine the impact to our short-term shipping schedule, including curtailments when necessary,” Atlantic LNG spokesman Billson Hainsley told NGI. “The amount of curtailment fluctuates on a daily basis. We continue to work closely with our customers to mitigate impacts from gas supply shortfalls.” Hainsley did not provide details on the volume of the production decrease or markets affected.

T&T’s “easy, cheap reserves” are in decline, the consultant said. Additionally, there have been “fairly substantial” technical problems in the gas patch that need to be worked out in order for incremental production to come online, he added.

“They’ve been a producer for 30 years or so, 25 years…The question is are they going to be a producer for the next 20 or 30 years, and I think that’s the horizon you’re looking at. There’s gas there for eight to 10 years with current reserves. The question is, is there something they can do to maintain their position in the much longer run,” he said.

The government is faced with offering producers terms that are attractive enough to incentivise exploration and production in a world of depressed prices for natural gas and surfeit of global LNG and methanol, thanks in part to production from shale plays in the United States.

“It’s not a great time to be trying to encourage a lot of exploration in what is likely to be expensive requirements to develop those reserves,” the consultant said.