The lesser prairie-chicken, whose habitat is spread across five U.S. states, has been listed as endangered or threatened under the stringent Endangered Species Act (ESA), which may lead to issues for future oil and natural gas development. 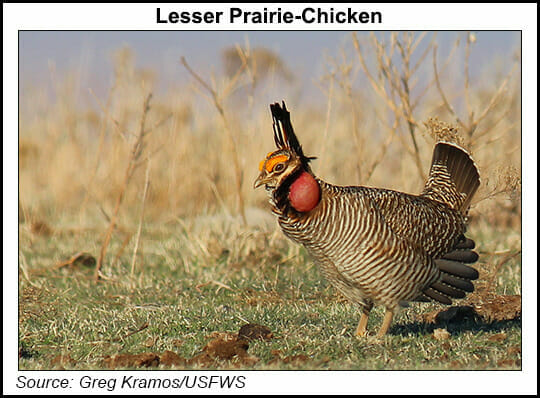 The U.S. Fish and Wildlife Service (USFWS) earlier this month listed two distinct population segments (DPS) of the species as endangered or threatened. The listings followed an extensive review of “past, present and future threats,” and by analyzing ongoing conservation efforts.

The Southern DPS, which includes eastern New Mexico and the southwestern Texas Panhandle, “is in danger of extinction,” officials said.

The Northern DPS, encompassing southeastern Colorado, south-central to western Kansas, western Oklahoma and the northeastern Texas Panhandle “is likely to become endangered in the foreseeable future.”

A rule also is being finalized by USFWS to conserve the Northern DPS habitat for lesser prairie-chicken “while allowing greater flexibility for landowners and land managers.” Habitat in Southern DPS consists mostly of shinnery oak prairie. Habitat in the Northern DPS includes short-grass, mixed-grass and sand sagebrush ecoregions.

“The lesser prairie-chicken’s decline is a sign our native grasslands and prairies are in peril,” said USFWS’s Amy Lueders, Southwest regional director. “These habitats support a diversity of wildlife and are valued for water quality, climate resilience, grazing, hunting and recreation.

“The Service continues to work with stakeholders to develop voluntary conservation agreements that will protect the lesser prairie-chicken and the native grasslands on which it depends while assuring that oil and gas and renewable energy development, ranching, agriculture and other activities continue.”

The USFWS “worked to ensure there are extensive options available for streamlined ESA compliance for all industries across the entire estimated occupied range of the lesser prairie-chicken,” said Lueders. “Moving forward, we welcome the opportunity to work with any other interested parties to develop additional options to fit their needs while providing regulatory certainty.”

Historical estimates suggest lesser prairie-chickens once were found across nearly 100 million acres of the United States. However, habitat loss and fragmentation have decimated the population. The bird’s habitat has diminished across its historical range by an estimated 90%.

Across the five-state region, aerial surveys from 2012 through 2022 estimated a five-year average lesser prairie-chicken population of 32,210, the USFWS noted. “Their decline reflects the larger decline in the vitality and resilience in shinnery oak, sand sagebrush and mixed- and short-grass prairie ecosystems.”

According to federal officials, voluntary conservation efforts have helped conserve key habitat, but they have not been able to offset the threats.

The USFWS estimated that of the 21 million acres analyzed, about four million (18%) acres were potentially lesser prairie-chicken habitat. That would suggest “minimal impact on development across large portions of the range due to the ability to avoid and minimize impacts to the species, when industry considers lesser prairie-chickens early in their planning process as part of their project siting decisions.”

Designating critical habitat for the lesser prairie-chicken may be “prudent but not determinable at this time,” said USFWS officials. “We will work with states and other partners to acquire the complex information needed to make a critical habitat determination.”

The final rule to list the two DPS  of the lesser prairie-chicken was to be published in the Federal Register on Friday (Nov. 25) and would take effect two months later. The final rule and supporting information are available online under Docket Nos. FWS-R2-ES-2021-0015.