The Energy Information Administration (EIA) reported a 23 Bcf injection into storage inventories for the week ending March 29, massively larger than the majority of expectations. 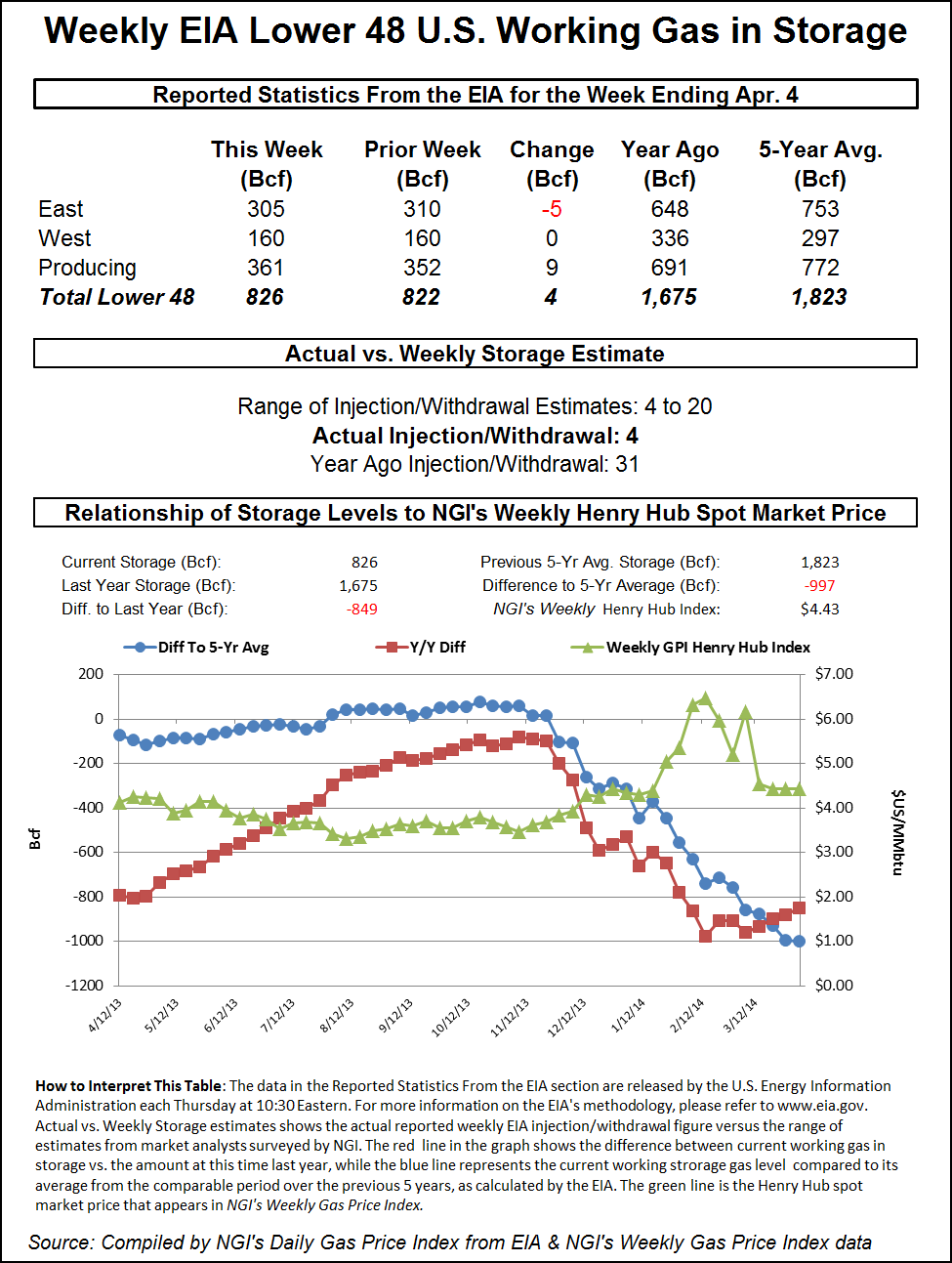 The reported build, the first of the injection season, compared to a year-ago 34 Bcf withdrawal and the five-year average draw of 23 Bcf. Market reaction was swift as prices had been holding within a penny of Wednesday’s settle and then dropped about 2 cents after the print hit the screen. At 11 a.m. ET, the Nymex May contract was trading at $2.647, down 3 cents on the day.

“This reflects a very loose supply/demand balance for the week reported and puts us well on track to make up the storage deficit versus last year over the next three weeks, though we continue to lag well behind the five-year average,” Bespoke Weather Services chief meteorologist Brian Lovern said. “Data this week continues to look quite loose as well, although with prices heading lower, we suspect that balances can finally begin to improve over the next several days.”

Ahead of the EIA report, major surveys showed the largest estimated build at 16 Bcf. A Bloomberg survey of 12 analysts had a wide range showing a 9 Bcf withdrawal up to a 16 Bcf build, with a median injection of 9 Bcf. A Reuters poll of 17 market participants had a range from a withdrawal of 2 Bcf to an injection of 16 Bcf, and a median build of 11 Bcf. Intercontinental Exchange EIA Financial Weekly Index futures settled Wednesday at a build of 19 Bcf. NGI’s model pegged the storage injection at 18 Bcf.

“Texas, Louisiana and Mississippi have a ton of intrastate storage that you can’t see, so there is a huge variance to estimates if the interstates and intrastates do something different,” said IAF Advisors’ Kyle Cooper.

Meanwhile, weak pricing in the Permian Basin — where cash prices have continued to set new lows during the last few days of trading — will likely incentivize larger builds. While Waha prices have been weak for a while, the multi-dollar dips into negative territory did not start until this week.

“Buying negative gas certainly makes a storage operator happy. The massively discounted prices started this week, so that will be reflected next week,” Cooper said on Enelyst, an energy chat room hosted by The Desk. “Negative Permian prices are going to do some interesting things.”

In addition to Permian prices’ impact on storage, nuclear generators could also be affected, especially as demand in the South Central region remains paltry. Wind generation is also higher.

Outside of the South Central region, the East withdrew 17 Bcf out of storage, while the Midwest pulled 7 Bcf. The Pacific injected 9 Bcf, and the Mountain region added 2 Bcf, according to EIA.